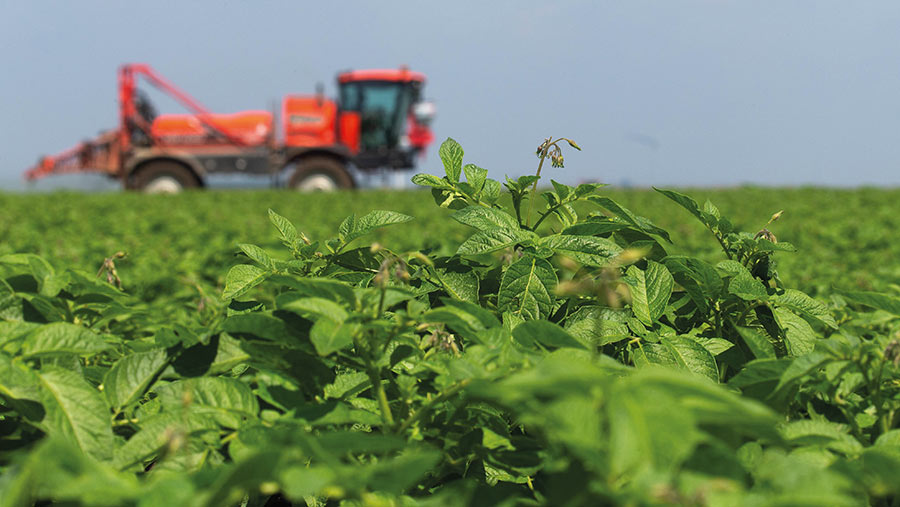 Despite its recent stay of execution, there is little hope for sustained use of multisite fungicide mancozeb beyond the 2023 growing season, and potato growers are urged to start planning how they will effectively manage disease and fungicide resistance without it.

Late last year, there was a chance that if the EU hadn’t passed the recommended withdrawal of mancozeb into law by end of the Brexit transition period, British growers would gain a reprieve for the 60-year-old fungicide.

See also: How a data analyst is improving 4 arable businesses in Norfolk

And that is exactly what happened on 1 January, when some pesticides under review by the EU were automatically given a three-year approval extension.

This is to allow Great Britain’s now independent pesticides regulatory system to scrutinise each active, including mancozeb, and technically makes it available to GB growers up to 31 January 2024.

Any application for renewal beyond that date must be submitted to the chemicals regulation division (CRD) of the Health and Safety Executive (HSE) three years before the new expiry date.

One of the main manufacturers of mancozeb globally will make the application to CRD before the deadline in the hope that it might take a different view to its EU counterparts.

However, despite the renewal process being triggered, hopes are described as very slim by many observers.

The initial reason why it was recommended for non-renewal by the EU’s standing committee on plants, animals, food and feed (SCoPAFF) was its potential impact on human health.

The European Food Safety Authority has classified the multisite as both an endocrine disruptor and harmful to reproduction. Also on its list of issues is a high risk to birds and mammals, non-target arthropods and soil macro-organisms.

With multiple concerns and judging by recent reaction to the emergency approval for neonicotinoids (many commenting it is the start of a post-Brexit erosion of environmental standards), CRD is unlikely to take a drastically different view to the EU in this case.

There is also the issue of Northern Ireland’s continued alignment with EU rules, which furthers limits the potential for divergence on mancozeb’s approval for the rest of the UK.

Scottish Agronomy’s potato expert Eric Anderson is also concerned that while on paper there is an extension to 31 January 2024, the recent trend of rapid product withdrawal could continue, with carbamate nematicide Vydate (oxamyl) a recent example.

The product – used to manage the impact of nematodes in root crops – was banned on 24 December 2020, with sales ceasing immediately. Industry only has until 28 February 2021 for storage and use, leaving very little time to make contingency plans.

With CRD retaining the right to review actives given an extension at any time, this rug-pulling approach could readily be applied again and catch growers on the hop.

That’s why Mr Anderson advises growers to learn how its loss will affect their business and put a plan B in place if it is swiftly withdrawn.

“Mancozeb will be a priority for CRD when it begins re-assessing actives and as we have seen with [alternative multisite] chlorothalonil, regulators have become much more draconian in their recommendations.

“Unless we see a complete about-face by CRD and it moves from the hazard-based EU system back to a risk-based model, where mitigation measures for safe use can be put in place, it is highly unlikely mancozeb will last the whole three-year extension.”

Even before a final decision is made on mancozeb’s future, the availability of some co-formulated products containing mancozeb, such as Invader, will not be available in 2021. Others like Curzate may be in short supply.

Manufacturers were anticipating its withdrawal across Europe – including GB – in 2020, so didn’t commit manufacturing efforts to supply the market. By the time it became clear that Britain was still open for business, there was no time to turn the tap back on.

Farmers Weekly understands that some straight mancozeb products, such as Manzate 75, will be available for use in tank mixtures this year, but supplies could be tight. 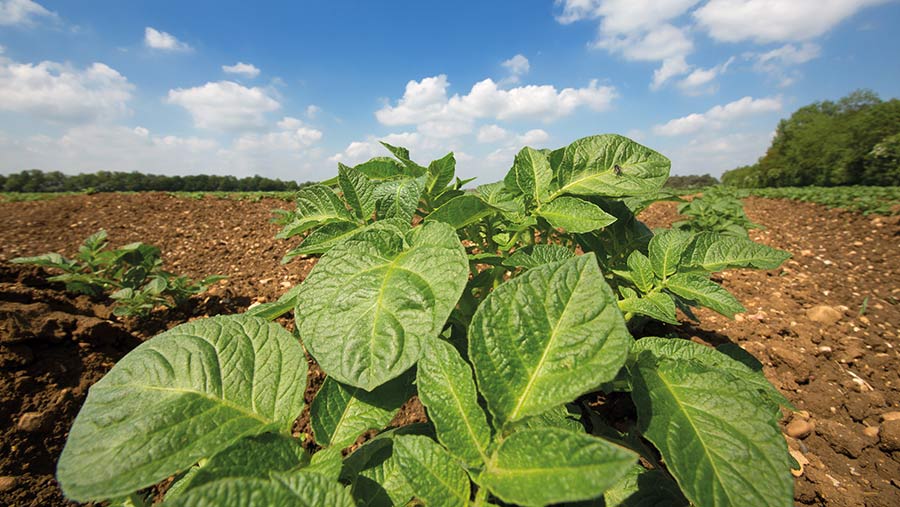 The predicted demise of mancozeb will be most felt in potatoes and an Adas report back in 2014 tried to put some numbers on the impact of its loss in Europe.

It concluded that the cost of blight-control programmes would increase significantly, as growers would be forced to switch to more expensive alternatives. Yield loss would also be seen, although this would vary across growing regions and seasons.

For context, UK growers can currently apply straight mancozeb for as little as £8/ha, but the next most cost-effective option (following Fungicide Resistance Action Group (FRAG) guidelines of mixing two modes of action in each spray) will be about £19/ha.

When yield loss was combined with the extra cost, it was estimated that gross margins could be cut by between €87m (£77m) and €507m (£449m) across the eight potato-growing nations in the survey.

While it could be argued these figures are out of date, one of its authors, Adas plant pathologist Faye Richie, says they still give a reasonable indication of what the loss of mancozeb might mean six years on.

A further sting in the tail identified is the potential acceleration of fungicide resistance to other fungicides, which over time could exacerbate production losses through poor disease control.

It is this aspect of mancozeb’s loss that most concerns Mr Anderson today, and he warns that incorporating anti-resistance principles into blight control programmes will become much more complicated in the coming years.

Its mode of action has supported higher-risk actives at very little cost for decades and the chief reason why mancozeb-containing products represent about 40% of blight sprays applied each year.

Further complicating matters is that late blight populations have recently become dominated by more aggressive strains, including 36_A2 and 37_A2, with the latter resistant to fluazinam – a key active for controlling tuber blight.

This means fluazinam is no longer recommended in mid- to late-season sprays, so alternative fungicides with activity on tuber blight have to be shifted from elsewhere in the programme – where they provide other strengths – to plug the gap.

Without mancozeb, all fungicides in potatoes with a single site mode of action are subject to label guidance or restrictions based on FRAG advice, limiting their use across the season (see table).

Because of these restrictions, and fluazinam-resistant tuber blight, Mr Anderson says that during a high-pressure season when spray intervals are shortened and more sprays needed, growers could soon find themselves short of legal options to complete an effective programme, without mancozeb.

He says now is the time to look carefully at all the products available from your supplier, identify the restrictions of each and map out how they might be used in low-, medium- and high-pressure situations.

“See how they fit into 10-, 12- or 14-spray programmes. Where shorter intervals are needed, have you got enough to pull you through?

“You need to cover the three phases – rapid canopy development, stable canopy and late season tuber blight control. Which products dovetail into those phases and does your programme have an overarching anti-resistance strategy?

“With mancozeb it’s been achievable, but without it we are talking about much more expensive and complex programmes.”

One positive in the anti-resistance doom and gloom is the introduction of a straight ametoctradin product Enervin SC last season.

The QoSI active has been available for several years in Diablo, a co-formulation with mancozeb that has been dropped by manufacturer BASF, or with dimethomorph in the products Percos and Zampro DM, which remain available.

BASF stewardship and value chain manager Paul Goddard says the thinking behind the straight formulation was to separate it from CAA fungicide dimethomorph, giving growers the option of tank mixing with alternative modes of action.

He adds that mixing it with mancozeb is a good option as long as it is available, but when it is withdrawn Enervin SC can be used to tank mix with Revus or Ranman Top.

The company also hopes to a have a new formulation that includes ametoctradin and potassium phosphonate registered in 2022 and reports on its performance in independent trials have been encouraging.

The potassium phosphonate in the product – coded BAS657 – is said to offer multisite activity and induces plant defences.

This is expected to fit early in the programme at rapid canopy, complementing newer products such as Zorvec Endavia and allowing them to rotate and mix products to manage resistance.

Both BAS657’s components offer completely different modes of action to CAAs, QiIs and QoIs, so again can help with anti-resistance strategy and save applications of those actives groups for later in the programme.

“As we are dealing with a polycyclic pathogen that has demonstrated it can change and evolve quickly, we need to bring through as many modes of action as possible to keep on top of it and minimise resistance development,” explains Mr Goddard. 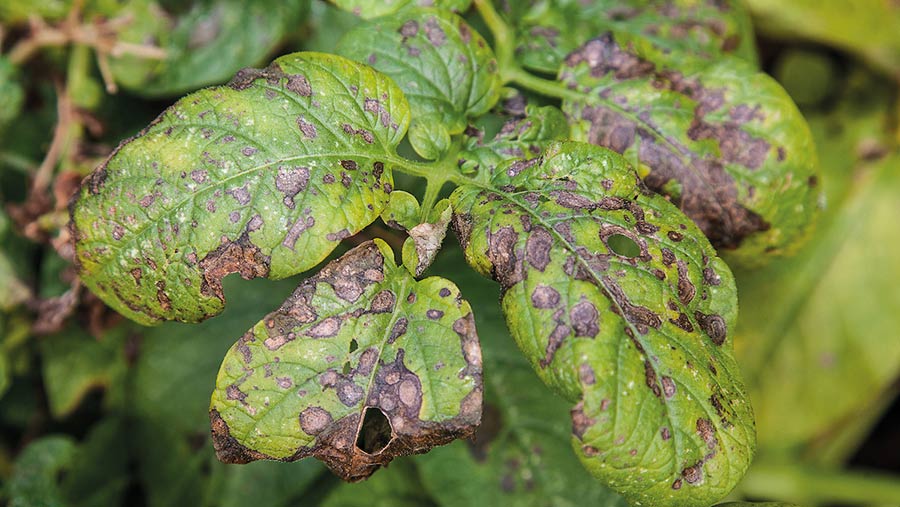 For early blight (alternaria) the outlook without mancozeb is less reassuring.

Mancozeb is mostly targeted at late blight, but also builds good incidental protection against early blight into the programme. Without it, there are few effective options remaining.

In Europe, resistance to SDHIs like boscalid and QoIs like azoxystrobin is widespread in alternaria and although little work has been done here to assess fungicide sensitivity, Mr Anderson suspects they offer little control in the UK too.

This leaves difenconazole as the only established alternaria option and its inevitable increased use without mancozeb will put a lot of pressure on one medium resistance risk mode of action.

“Bayer did release Caligula in limited volumes last year, but it contains an SDHI [fluopyram] and azole [prothioconazole] so doesn’t offer variety in modes of action and its higher cost may limit its use in the short term.

“We also don’t know if there is target site cross resistance to SDHI-resistant isolates already out there, but with what we know in septoria and net blotch, it might be the case,” notes Mr Anderson.

In brief – mancozeb’s withdrawal in potatoes