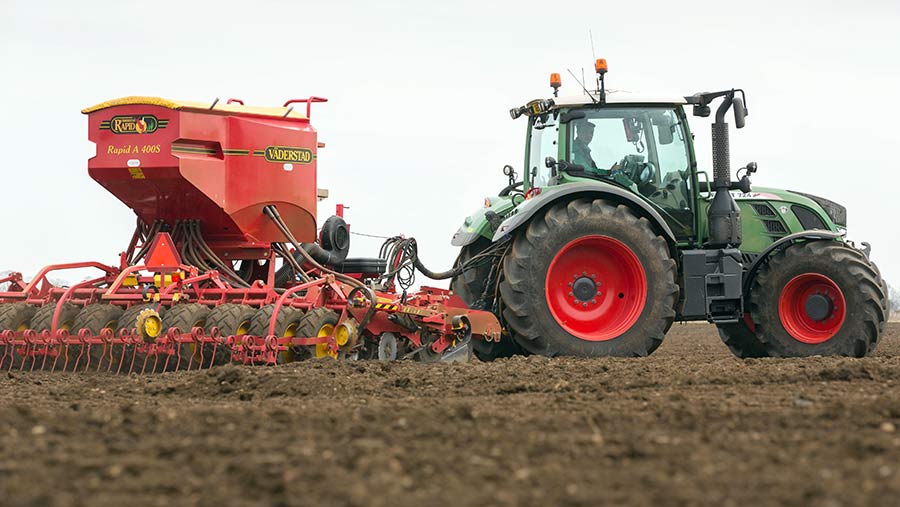 Britain has the ideal climate for powdery mildew to infect barley crops, and with 15 out of the 26 winter varieties on the AHDB Recommended List being susceptible to the fungus, growers need to look out for it.

There are several forms of the mildew pathogen, each of which affects specific crops and will not cross-infect. The species affecting barley is the hordei form of Blumeria graminis.

Infection during the important stages of early crop development can reduce green leaf area, limit tiller formation or cause tiller loss, all of which ultimately reduce yield. Disease must therefore be controlled early to prevent this happening.

Mildew at a glance

Maris Otter grown on contract in Herefordshire, for example, was hugely affected by mildew in the mild winter of 2018-19.

Scottish Agronomy’s senior agronomist Eric Anderson also says the disease has been a problem in susceptible winter varieties, such as Orwell (rated 3 for mildew), Flynn (4) and Cresswell (4).

He suggests seasonal variations in mildew incidence are more closely linked to changes in the area of susceptible varieties grown each year than to changing weather patterns.

Barley crops in any region of the UK can be at risk from mildew if conditions favour it.

Mildew overwinters as mycelium (the vegetative part of the fungus) on crop debris, volunteers and autumn-sown crops, which provides inoculum to infect crops in spring.

Spores produced during late summer are resistant to low temperatures and drying, so the fungus can survive without a host, although it needs a green plant to infect for further spread.

Adas cereal disease expert Jonathan Blake says winter temperatures of -6C to -7C will suppress the disease that developed in autumn and make it less aggressive, but will not eliminate inoculum.

“Cold weather gives a bit more flexibility when it comes to spring treatment, potentially allowing you to wait until early or mid-March, rather than having to treat crops sooner.”

Rising temperatures in spring, combined with adequate moisture or humidity, prompt dormant mycelium to grow on young plants and produce spores (conidia). These airborne spores are spread up the plant and on to other plants by the wind.

Mildew is relatively easy to identify, characterised by white, fluffy pustules that can merge to form a mass of powdery looking spores on the leaf surface. This may spread to stems and ears if disease develops later in the season.

Pustules can be rubbed off, leaving discoloured yellow/ brown tissue beneath, indicating where plant cells are beginning to die.

Pustules turn a darker grey or brown as they age and eventually black spore cases (cleistothecia) may develop within the mildew pustules towards the end of the season on lower leaves. 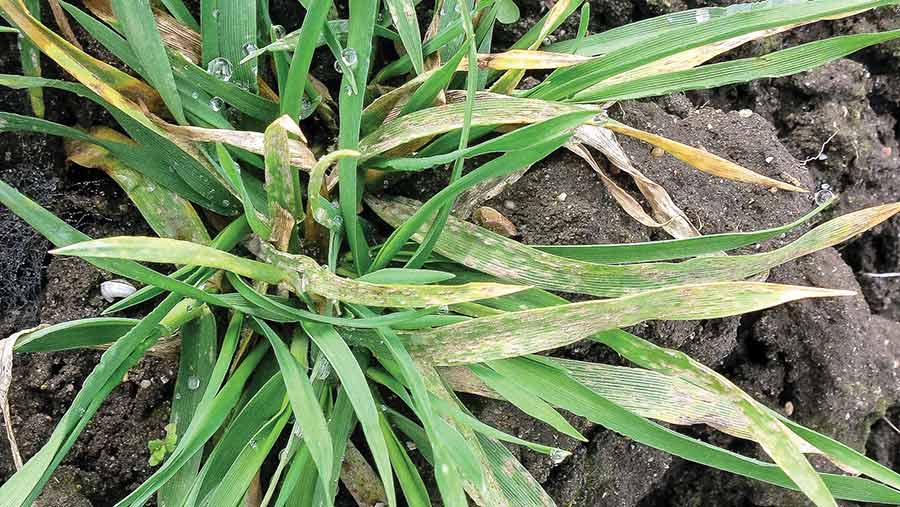 In mild seasons, symptoms can occur in winter barley during autumn and winter, although severity may be reduced by frost.

Mildew is less of a concern in spring barley due to the deployment of the “mlo” resistance gene – most are rated 8 or 9.

There are still some susceptible varieties though (such as Golden Promise), which are most affected at leaf emergence and tillering, but symptoms can develop as early as growth stage 11 (first leaf unfolded).

Stressed crops are also at higher risk of mildew, and manganese deficiency in particular can increase risk, says Mr Anderson.

Selecting a variety with strong mildew resistance is the most effective way to reduce risk. Indeed, deployment of the mlo resistance gene has all but eliminated mildew as an issue in spring barley.

Research has found varieties with the mlo gene can be more susceptible to ramularia, though, which is worth considering when planning agronomy, especially as there is limited effective chemistry against ramularia, Mr Anderson says.

Many winter barley varieties now also carry good mildew resistance, although experts stress that Recommended List ratings should only be used as a guide.

The majority of varieties on the list are rated 4 to 6, and even one that is scored 6 for mildew can be hit if environmental conditions are right for the disease. It tends to be the older, bespoke varieties that are most at risk.

In spring barley, removing the “green bridge” for overwintering inoculum, such as volunteers, and burying stubble and crop debris can help reduce mildew risk, although given that spores spread on the wind, it is impossible to stop outside infection from neighbouring areas.

Good soil structure and rooting to minimise plant stress, ensuring crops are healthy and adequately nourished improves their resilience to any disease, including mildew.

Experts agree that mildew rarely warrants control in autumn, unless disease pressure is particularly severe, in which case it should be treated with a specific mildewicide to avoid compromising early development and tiller formation.

Early control in spring (before growth stage 30) is the main timing and in the worst-affected crops, Mr Anderson recommends applying a T0 fungicide of a mildewicide, such as cyflufenamid.

Prothioconazole also has useful suppressive effects on mildew and is likely to already feature in many barley fungicide programmes for controlling other diseases such as rhynchosporium, net blotch and ramularia, he notes.

Following the revocation of chlorothalonil, Revystar (fluxapyroxad + mefentrifluconazole) has demonstrated better activity on ramularia than Proline (prothioconazole), he adds.

“Mildew isn’t as yield-sapping as other diseases, but you still have to control it early. You can’t let it spread up the canopy on to new leaves, otherwise it will stress the plant, compromise tiller formation and risk losing tillers.”

The main protectant chemistry includes products based on cyflufenamid or proquinazid.

Strobilurins are not effective due to widespread resistance.