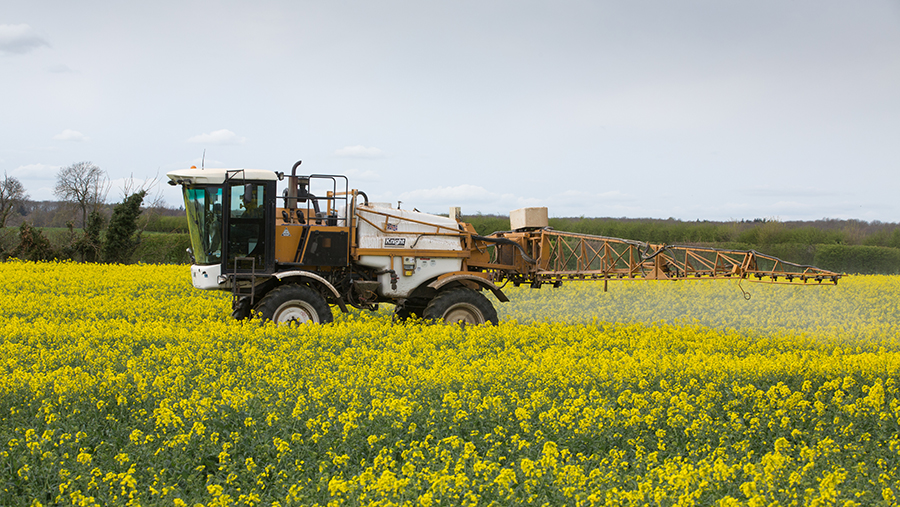 Oilseed rape growers are set to benefit from a new fungicide this season which controls sclerotinia at flowering, with yield increases of up to 0.4t/ha over existing farm-standard treatments.

Aviator, from manufacturer Bayer, which is commonly used in cereal fungicide programmes combines the azole prothioconazole and the SDHI bixafen to provide three weeks of disease protection when applied during early to mid-flowering.

The product offers a 5% greater control of sclerotinia above the prothioconazole farm standard from a single application, and also gives protection against light leaf spot, explains Matthew Garnett, commercial technology manager at the agrochemical firm.

In 2019, 11 growers from across the UK trialled the fungicide against their current flowering spray regime, and Aviator out-performed the farm standard in 10 trials, when applied at 0.75 litres/ha, during early to mid-flowering.

An average yield benefit of 0.2t/ha was achieved, with the greatest yield increase reaching 0.4t/ha.

“The new fungicide will cost about £5/ha more than the current farm standard Proline (prothioconazole), but with an average yield benefit of 0.2t/ha, a £60/ha higher margin over input cost is reached, assuming a rapeseed price of £329/t,” he explains.

Lincolnshire grower, Alex Borthwick was one grower who took part in the trial which compared Aviator against his farm standard of prothioconazole (Proline) and azoxystrobin (Amistar).

“There was minimal yield uplift, but I am pleased with the results, given the dry growing conditions and rain at harvest, which reduced yields by 0.2t/ha, after we received 50mm of rain on 31 July,” he says.

Mr Borthwick’s standard programme of 0.35 lites/ha Proline and 0.6 litres/ha Amistar, costs him £28.50/ha, whereas the ready-made formulation of Aviator boosts yields and works out cheaper at £25/ha.

He believes the area treated with the SDHI stayed greener for longer due to increased chlorophyll levels which resulted in greater rates of photosynthesis and, therefore, improved yield and consistency across the trial.

“We were able to differentiate the Aviator treated areas on NDVI (normalized difference vegetation index) maps which showed an increase in chlorophyll levels prior to harvest,” he adds.

This season, Mr Borthwick plans to use the new product across the majority of his oilseed rape crops where yield potential is good.

“However, where crops are struggling and yields are limited we will use a cheaper and reduced programme,” he adds.

A total of 146ha of rapeseed was planted this season, but 33ha of the crop near Scunthorpe was destroyed by cabbage stem flea beetle, before it had time to fully emerge.

“We now have 113ha remaining, but 20ha of this has low yield potential so it’s unlikely we will apply Aviator here,” he says.

“We haven’t really ever suffered from sclerotinia as we have always had a good control programme in place,” adds Mr Borthwick.

Oilseed rape crops are most at risk of sclerotinia infection from the onset of flowering, as the disease develops when petals fall and stick to leaves or stems.

Therefore, the optimum application timing for Aviator is early to mid-flowering, ahead of the main period of petal fall, at a dose of 0.75 litres/ha.

“It’s important to protect the petals before they fall with effective control relying on good spray penetration into the crop canopy,” says Matthew Garnett.

He explains how the season, weather conditions and the length of the flowering period will have an impact on applications, and a second repeat treatment may be needed three weeks later.

“Under high risk scenarios and when the flowering period is longer a second application is required due to the need for a longer window of protection,” he adds.