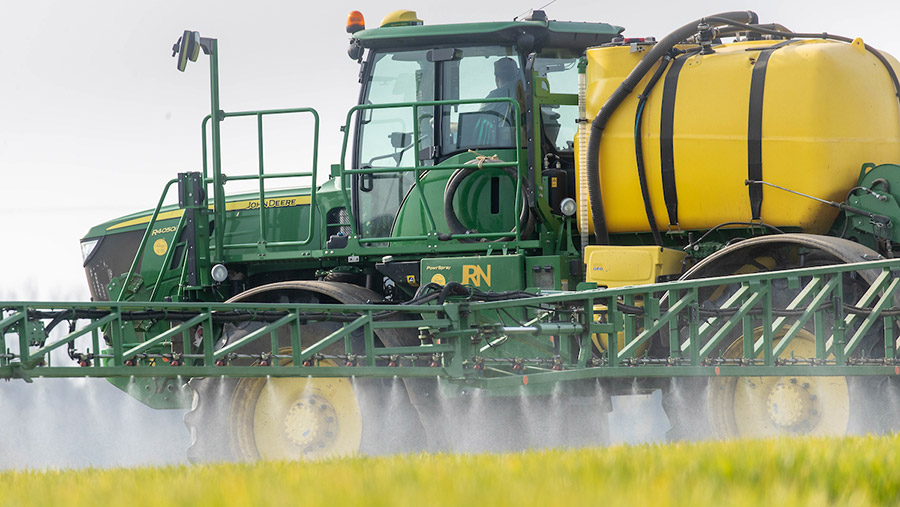 Winter wheat growers are set to benefit from a second sulphur-based fungicide this spring, with Adas trials showing how the product can offer good septoria control as part of a disease programme with a clear yield response and improved margin.

The product, known as Vertipin, offers multisite activity, achieving a 0.34t/ha average yield increase when used at 3 litres/ha with a standard programme encompassing Revystar (fluxapyroxad + mefentrifluconazole) at the T2 timing.

Using multisite fungicides is beneficial to the resilience of fungicide regimes, as their formulas are less likely to suffer from reduced efficacy and help protect single-site actives over time. Last year saw the arrival of UPL’s new liquid sulphur product, Thiopron.

Stewart Woodhead of Sipcam UK, the company that introduced Vertipin to the UK market, explains that when applied at 2 litres/ha, Vertipin is as effective as other multisite products available in the UK.

The dose response continues up to 3 litres/ha, where optimum disease control is reached.

A series of trials carried out by independent crop consultant Adas using different fungicide programmes were set up at three different trial sites.

These were designed to test effectiveness against septoria, with sites in Wales, Herefordshire and Devon selected due to their high disease pressure threats.

Introduced to the UK by crop disease specalist Sipcam, Vertipin is already used across Europe, comprising sulphur as the active ingredient and pine terpenes as the adjuvant.

Sulphur is a known multisite alternative to fungicides such as chlorothalonil, which is no longer available, performing at its optimal when used alongside effective single-site chemistry.

Pine terpenes help to create a liquid formulation that is easy and effective to use, minimising risk of blockage and providing good compatibility with other crop protection products, when combined with the use of high-grade sulphur.

“Vertipin has added advantages provided by its high-quality formulation. The adjuvant effects provided by the terpenes in particular make it a good partner for other products,” says Stewart Woodhead of Sipcam UK.

Vertipin provided protection when used on its own, but achieved an extra 30-40% reduction in disease and an average of 0.34t/ha increase in yield when used at 3 litres/ha, with a standard programme that included Revystar at T2.

In fact, using Vertipin at 3 litres/ha at T1 and T2 added £40/ha to the margin over fungicide cost, when compared to the best Revystar-only treatment.

“Farmers might consider simply increasing the rate of a good single-site fungicide such as Revystar, but trial data – which was consistent on all three trial sites – showed a greater benefit in adding Vertipin instead.”