The cost of wheat disease control has been rocketing over recent years, with some farms now using five or even six fungicide applications to protect yield.

Unhappy with being dragged down this slippery slope, Kent grower Andrew Howard is moving away from a prescriptive chemical-reliant approach by adopting a system that focuses on soil health and plant nutrition to reduce the impact of disease.

A UK wheat production system that relies heavily on bagged fertiliser and pesticides has produced some world record-breaking yields in recent years, most notably the 16.52t/ha achieved in Northumberland in September 2015.

See also: How to find the best varieties on the revamped oilseed rape list

Mr Howard says this “high-input, high-output” system can be successful, but comes with eye-watering costs and is justifiable only for those growers with the best land and climate.

His farm just outside Ashford sits on variable soils and in an area prone to yield-strangling hot spells during June. Average field size is also small, meaning that on some fields 30-40% of the crop is on headlands.

While his wheat can achieve 14t/ha in the middle of the smaller fields on the best soils, the headland factor drags his average down to 9-10t/ha, so he can’t justify high variable costs.

He also doesn’t see the system having a bright future. “I might be wrong, but I think that type of [high-input] farming is going to be phased out,” he says.

“You only have to look at Defra’s 25-year environment plan to see that.” 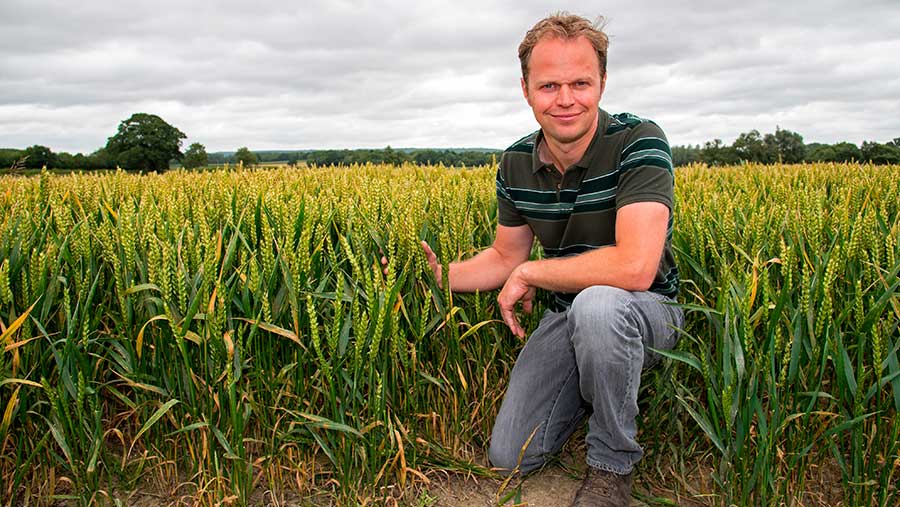 Knowing his farm’s limitations, Mr Howard went about researching how he could reduce this reliance on external inputs and reduce costs, while maintaining or even improving output of his crops in the process.

Inspired by Nutrition Rules!, a book by Australian agricultural consultant and plant nutrition expert Graeme Sait, he discovered an alternative philosophy to intensive agriculture that cuts use of chemicals and bagged fertiliser.

“Its basis is that all plant disease is linked with nutrition and if you get that right, disease should, in theory, disappear. There has been a lot of work done in this area and there is reference after reference out there to back it up,” he adds.

Giving plants all the nutrients they need is impossible without healthy soil, and following 10 years of min-till and then strip-till, the farm adopted a no-till establishment system in 2011 to further improve soil health and biology.

Mycorrhizal fungi and their association with plant roots are a fundamental factor in plant health and to avoid harming or reducing these fungi in the soil, Mr Howard is phasing out fungicide seed treatments on his cereal crops.

He also injects a liquid feed alongside the wheat seed to help improve establishment, stimulate rooting and help the mycorrhizal-rhizosphere relationship in the autumn.

This includes a mixture of plant-associated Pseudomonas, Bacillus and Azotobacter bacteria species and Trichoderma fungi which, when applied within a healthy soil system, can promote plant growth, health and disease resistance. 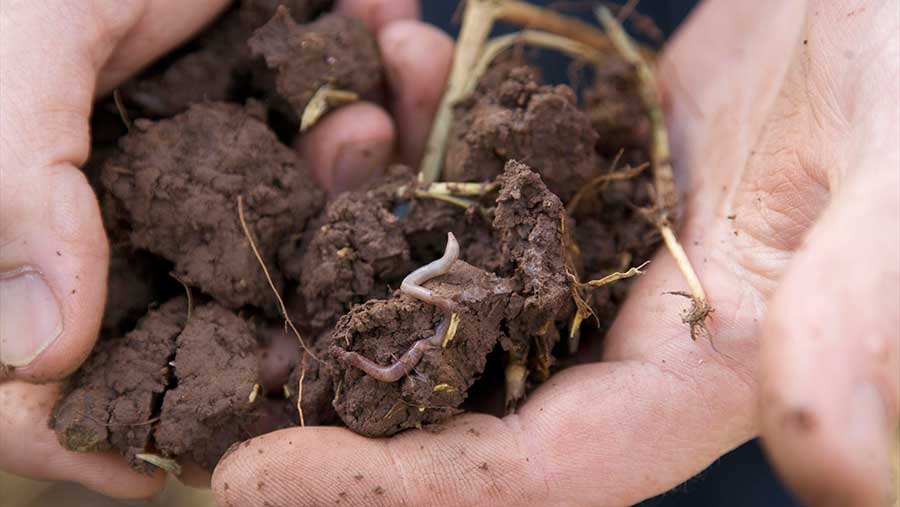 To cut costs, Mr Howard home-brews his own bugs in an intermediate bulk container (IBC), rather than buying in ready-made products. The brewing kit cost just £300 to set up and after finding a different food source for the bugs, he has halved his production costs.

“We were using seaweed powder, but we now use molasses. It results in double the bugs in the solution, so we have been able to reduce rates by half,” he explains.

Another component of the liquid applied with the seed is silica, which is heavily linked with reducing abiotic and biotic stresses in plants and increases their ability to resist pathogenic fungi.

Tough plants such as mare’s tail (Equisetum arvense) are very high in silica and Mr Howard says increasing levels of the element in the crop through the season helps act like armour against pathogens such as septoria and rusts.

He uses a highly concentrated form of silica known as diatomaceous earth, mixed into the suspension for as little as £2.50/ha, and last season tested throughout the growing cycle to monitor levels in his wheats.

“Mycorrhizal fungi are linked with silica uptake, so without the right soil biology you won’t be able to improve it and one of the biggest antagonists is nitrogen fertiliser.”

As well as being an antagonist to silica uptake, Mr Howard says excess nitrogen in the crop system is the biggest cause of disease.

He likens it to sugary energy drinks in humans: it gives the plants a sudden “rush”, but ultimately they crash, weakening disease defences and increasing the need for fungicides.

Ammonium nitrate is one of the worst culprits and a switch to urea sulphate as a slow-release alternative has helped reduce this “rush” effect.

Nitrogen fixers are also included in the liquid mix at seeding to provide the crop with a slow release nitrogen supply that serves up 30-80kg/ha of N throughout the growing season. 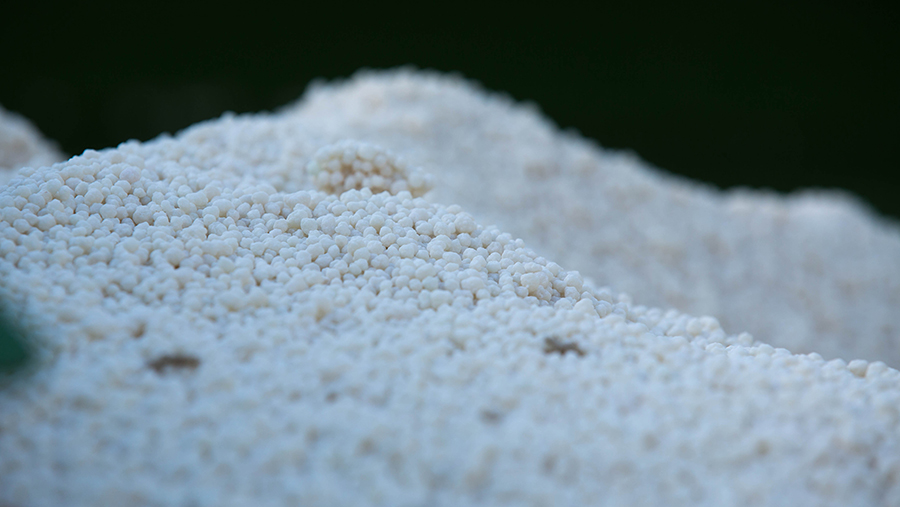 “A key thing with the nitrogen fixers again lies in the soil. You can’t put them on to a poor environment, it needs to be healthy for them to survive and provide the [crop] benefits,” he adds.

After using the alternative system and markedly improving his soils over a seven-year period, the foundation was laid to reduce bagged N use by 10% a year over the past three years.

Last season three passes of 38:0:0:19 (NPKS) urea sulphate and late application of ammonium nitrate to hit milling spec gave his quality wheats a total of 180 kg/N/ha, and the 10% incremental reduction will continue in future seasons, with just 160 kg/ha planned for 2018.

The autumn biological and nutrient programme is designed to produce a well-established and healthy crop and is followed up by a series of foliar sprays at the main fungicide timings during the spring.

Mr Howard tests his soils, accounts for nutrients available from the preceding cover crop and draws up a nutrient plan for the season.

This is backed up by tissue tests that continue to measure nutrients, plant pH and brix levels (an indicator of photosynthetic capability) as the season progresses.

Any deficiencies are then addressed by adding macro or micronutrients to the base solution of amino nitrogen – which itself is 95% efficient – and applied at the T0, T1, T2 and T3 timings with any fungicide that is required, based on the season’s risks.

This is all complimented by another home-brew microbial mix, based on Bacillus species with a food source, which colonises the leaf surface and stomata (leaf openings) and helps reduce or delay disease infection. The cost is about £1.25/ha per application.

Last year he didn’t use a T0 fungicide at all and reduced fungicide spend at T1 by 30%, with just an azole/chlorothalonil mix applied with the nutrients and microbes.

The T2 timing has included costlier SDHI-based chemistry in the past, but Mr Howard has reduced dose by 30% and isn’t convinced it will be required at all in the future if the crop is supplied with the right balance of nutrients.

This is particularly the case with phosphorus, potassium and copper, as deficiencies in these elements have been linked with rust epidemics and plants struggle to scavenge sufficient supplies themselves.

“My agronomist would like to use an SDHI at T2, but I’d hope in the future, two applications of Bravo (chlorothalonil) at both T1 and T2 might be enough,” he says.

“The only issue is the potential for mycotoxins [following a fusarium outbreak], so a fungicide will be required at T3 for the foreseeable future. The last thing you would want is to end up with a heap of unmarketable product.”

Mr Howard has seen comparable yields to previous years and when comparing wheat treated with his biological programme with conventionally treated controls, he noticed an improvement in bushel weights from 76-77kg/hl to 79-80kg/hl last year.

This season he is conducting some strip trials where no T1 fungicide will be used at all and he would also like to wean his crops off remedial use of trace elements as the health of his soils improves.

There are also trials in the ground looking at wheat variety blends of three Group 1s and three Group 3s to see if the mixture of genetics can provide further assistance in reducing the impact of disease.

He is not aiming to go organic, but instead wants to fight the tide that has seen UK growers move from using 180kg/ha of N and two fungicides 20 years ago, to much higher N rates and four or five fungicides today.

“Also, any new fungicides that come along work well for a few years and then they start to break down,” he says.

“I see moving to this system as a necessity, not a choice, and the ultimate goal is for the farm system to run itself without any external inputs.”

This new series aims to showcase arable farmers who are ahead of their time and are trying new approaches, whether its growing new crops, taking a radical approach to growing oilseed rape or being a pioneer in the use of new technology.

If you know of any farmer or wish to be featured in this new series, contact the arable editor at richard.allison@reedbusiness.com.

Problem being solved: The cost of managing disease in wheat has rocketed in recent years, but this high-input, high-output approach does not pay on more challenging soils and climates.

Approach: Overhauling how wheat is grown, cutting back on inputs such as fertiliser and fungicides by adopting a system that focuses on soil health and plant nutrition to reduce the impact of disease.