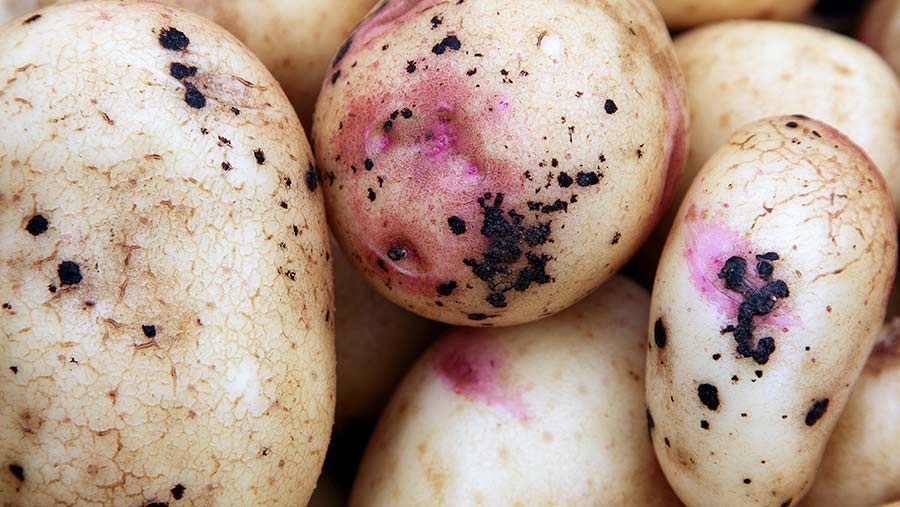 Potato growers have another tool for tackling the seed-borne disease black scurf, with the first full season of a new SDHI fungicide seed treatment.

Although the product was launched last season, many growers missed out on the benefits as it was only available in limited quantities because of its late approval.

Black scurf, caused by the fungus rhizoctonia solani, is a blemish disease of potatoes that reduces the amount of marketable potatoes through a combination of lower yields and higher levels of rejects because of the surface blemishes.

Edward Hagues, Bayer campaign manager for root crops, highlights trials carried out in Fife by Scottish Agronomy in 2018, which used heavily infected seed with tubers from the untreated crop suffering a 47% incidence of black scurf.

“Tubers from the Emesto-treated crops were found to contain no detectable levels of black scurf compared with 2% for Monceren [pencycuron] and 12% for Rhino DS [flutolanil].”

He believes the trial shows how the SDHI fungicide can help farmers deliver crops with a quality skin finish within the parameters demanded by the market.

The maximum dose is 1kg/t of seed tubers at planting, and while it can be used on all varieties, he stressed that it must only be applied using automated powder dispenser equipment fitted on an automatic planter.