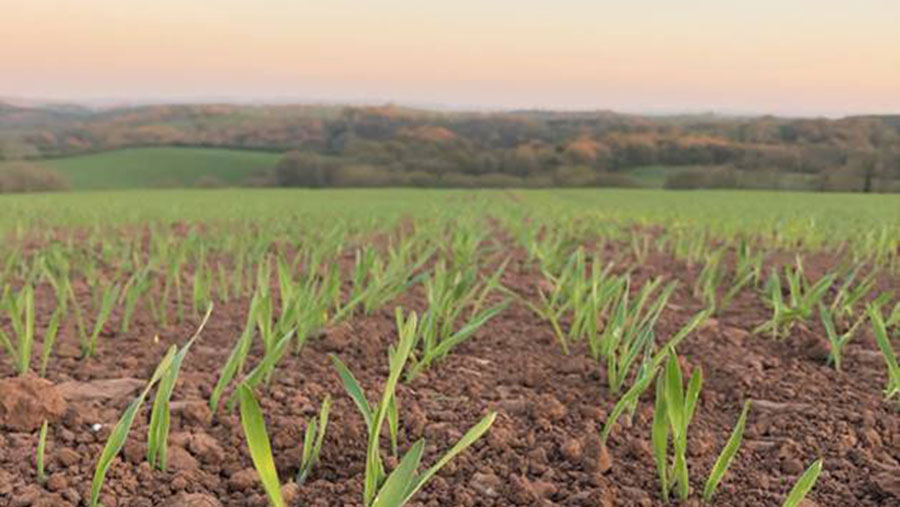 Spring barley crops will need robust T1 fungicide sprays this season to control early diseases and help counter the loss of key active chlorothalonil, which has been vital for the control of yield-sapping ramularia.

By controlling the likes of net blotch and rhynchosporium diseases early in the season and so reducing plant stress, the risk of late attacks of ramularia on healthy plants is much reduced.

Ben Freer, UK business development manager for agrochemical firm BASF, highlights how spring barley needs love and care early on in its development to reach good yields and counter the threat of ramularia.

See also: What English spring barley growers can learn from the Scots

“We need to evolve our fungicide programmes as pathogens evolve, with growers applying both a strong T1 and T2 for effective control,” he says.

This is critical for enhancing yield and straw quality with ramularia control playing an important role in minimising the risk of brackling – where the heads of barley bend and break off – and which is particularly important this season due to straw’s expected high value of about £150/t.

David Leahy, the firm’s Irish business development manager, says a programmed fungicide approach is vital to control the disease and limit resistance, while breeding for ramularia resistance is a long-term game.

“If you compromise the T1 application there is a knock-on effect at the T2 stage which negatively impacts the crop due to ramularia threats,” he says.

Growers should, therefore, focus on an efficient, targeted and rationalised use of fungicide inputs, with Mr Leahy saying that growers have a wide range of actives to choose from, including his own group’s SDHI fluxapyroxad for rhynchosporium control and pyraclostrobin to control net blotch.

Growers are only able to use the multisite chlorothalonil, which historically has offered the best control of ramularia, until 20 May this year. This will put pressure on the residual efficacy of the widely used azole in barley prothioconazole.

Mr Leahy advises growers to avoid using the same azole twice by alternating them throughout a fungicide programme where possible to reduce resistance build-up.

“We need to protect all of our actives by using the best SDHI and the best strobe, to protect the best azole,” he adds.

Growers can also benefit from the group’s new azole-SDHI fungicide for this season, Revystar, which contains the new azole mefentrifluconazole, and fluxapyroxad.

Fiona Burnett, professor of applied plant pathology at Scotland’s Rural College (SRUC) says a maximum individual dose of 1.5 litres/ha can be applied in a maximum of two sprays.

“Revystar’s efficacy sits between chlorothalonil and prothioconazole, where it must be applied before growth stage 69 for feed barley and growth stage 45 for crops destined for the British Beer and Pub Association,” she says.

Prof Burnett also highlights how biostimulants and micronutrients could play a greater role in mitigating against crop stress as well as a multisite alternative to chlorothalonil, namely folpet, which could potentially be used at T2.

“Folpet has a variable effect on ramularia. It distresses the crop rather than controlling the disease directly, but this is helpful in disease control as crops undergoing lower stress levels are less affected by ramularia,” she adds.

New Zealand has a long history of spring barley production without the use of the multisite fungicide chlorothalonil.

Barley diseases are controlled using programmes based on prothioconazole to control rhynchosporium and brown rust, with net blotch uncommon and powdery mildew outbreaks sporadic across the country.

Total fungicide spend of the crop is about £77/ha.

Grant Hagerty, BASF’s technical manager in New Zealand, says T1 timings are generally later than in the UK, with applications of the azole prothioconazole and multisite folpet often applied at growth stage 31-32.

Fungicide timings of T2 sprays depend on the interval from the T1 spray, the risk of ramularia versus brown rust risk and the timing of the mepiquat-based plant growth regulator Terpal (ethephon + mepiquat) with spray treatments.

“Applications for T2 are applied later than the UK, at the toothbrush stage where the awns are beginning to appear as we want to wait for the explosion of ramularia during growth stage 55-65,” he says.

However, there is considerable discussion over the timing of high performance inputs, with a “hard and early” approach or a “timely” spray at flowering used by growers.

“Imtrex and prothioconazole are the standards at T2, but there is debate over the use of folpet at this stage,” he says. Imtrex is the company’s straight fluxapyroxad.

Mr Hagerty also points out that the group’s Revystar (fluxapyroxad + mefentrifluconazole) is set to become a crucial product in managing ramularia in New Zealand, where it will become the standard at T2, replacing Imtrex.