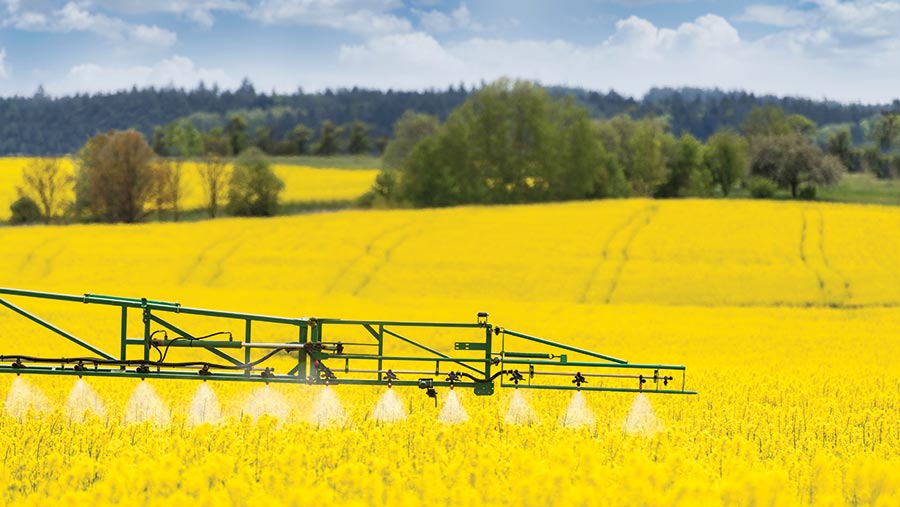 Controlling sclerotinia disease in oilseed rape crops will be more important than ever this season, as the UK’s rapeseed area is considerably down, which makes optimising yields of those crops critical.

Philip Walker, plant pathologist at Adas, explains how the next few weeks will be vital for growers to control disease as the majority of crops are expected to reach flowering in the next few days.

“Flowering is relatively on track in rapeseed crops this season and will begin in mid-April. Some forward crops are now flowering as a result of warm weather, which increased growth rates,” he says.

Mr Walker says fungicides should be applied during mid-flowering, before there is any significant petal fall. Ascospores released during sclerotinia germination need a nutrient source, which petals provide, otherwise growers risk yield losses of up to 50%.

“By spraying during mid-flowering, growers ensure the peak amount of flowers receive the active which limits disease spread,” he adds.

Fungicides available for use as a flowering spray to protect against the disease include prothioconazole (Proline), azoxystrobin (Amistar) and sprays based on boscalid (Filan and Pictor).

Aviator from manufacturer Bayer, which combines prothioconazole and bixafen, is also newly available for this season.

“A range of actives are available for sclerotinia control, which all perform in a similar manner to provide a good level of disease control, but prothioconazole and boscalid would have to be my stand-out choices,” he says.

Mr Walker recommends a single fungicide dose with a minimum application rate of 75%.

However, he adds that the season, weather conditions and the length of the flowering period will have an impact on the number of applications required, with a second repeat treatment sometimes required three weeks later.

“When the flowering period is longer than usual and a high-risk situation is being experienced, a second application is required due to the need for a longer window of protection,” he adds.

Growers who were unable to apply a light leaf spot application in the early spring are advised to apply a prothioconazole-containing flowering spray to provide control against the disease.

The active will prevent the spread of the fungal disease to the yield-performing pods. However, Mr Walker highlights that the later spray application will only limit light leaf spot spread rather than eradicate it completely.

For sclerotinia infection to occur there must be a minimum of 23 consecutive hours of temperatures greater than 7C and a relative humidity of over 80%.

Adas’ Philip Walker advises growers to use the AHDB disease-monitoring service, which maps weather and humidity patterns of specific UK sites to produce a risk-based scenario of when regions are likely to become under attack from the disease.

“It’s absolutely essential growers continue to monitor their crops and keep an eye on weather conditions in order to calculate the impact and timing of sclerotinia, to limit its spread and avoid yield losses,” says  Mr Walker. The forecasts can be found at the ahdb.org.uk/sclerotinia.