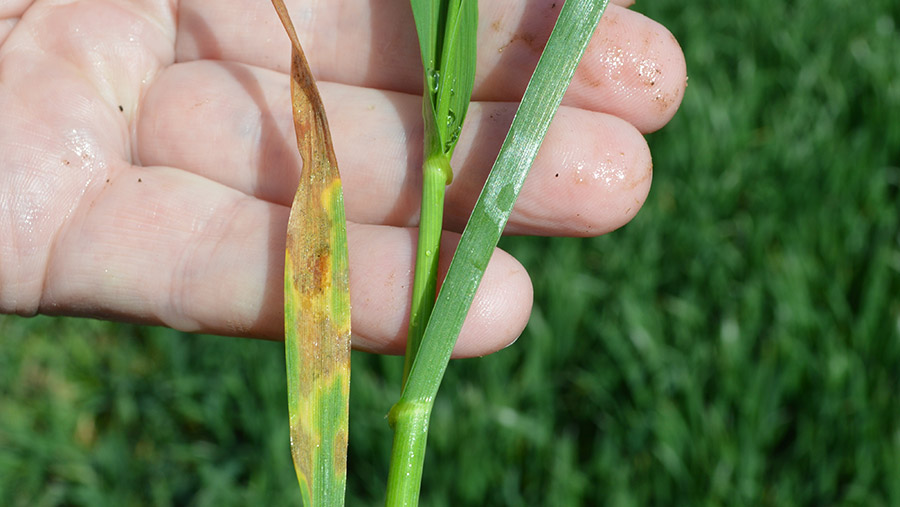 Septoria disease is being seen in wheat crops in south Oxfordshire, which are racing ahead in the early spring and set the reach the key T1 fungicide timing by mid-month.

One crop of the winter wheat variety Graham is seeing leaf three emerging, while septoria disease is being seen on the lower leaf six of the variety (see photograph above).

The T1 stage in winter wheat is when leaf three is two-thirds to three-quarters emerged on the main stem.

The crop on the farm managed by Mark Oldroyd did not receive a T0 spray as the variety Graham has a good level of resistance against wheat’s most yield-sapping disease, septoria.

Last year, he missed out the T3 ear spray on the Graham, and this season has omitted the T0 to aim at a two-spray fungicide programme of SDHI-azole-chlorothalonil at T1 and again at T2.

“Last year the lesson we learned was that with the right variety we can cut back on fungicide costs,” he tells Farmers Weekly.

So this year he is hoping to reduce his fungicide spend on the variety down to about £80/ha against the usual spend on the farm, which can range between £80-120/ha.

Mr Oldroyd manages 300ha of winter wheat on the near-1,500ha of land he manages at Sherwood Farm, Brightwell-cum-Sotwell, near Wallingford, in the Thames Valley, about 10 miles south of Oxford.