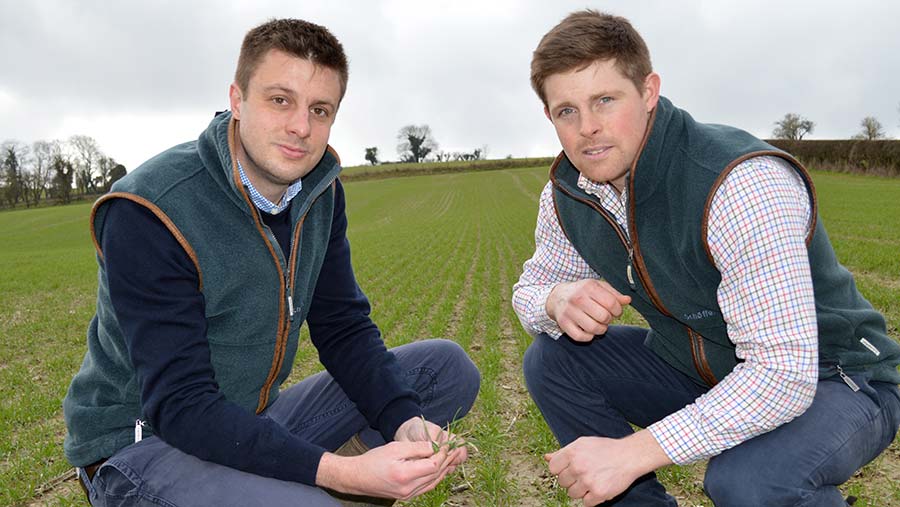 Wheat’s most damaging disease, septoria, is appearing in the wetter West this season, prompting one Dorset cereal grower to prepare to strike early to keep the infection under control.

Mild winter weather has resulted in lush crops, while recent rain has helped spread the pernicious disease, and George Fraser is keen to protect his wheat crops as yields can reach up to 13t/ha.

He is planning an early T0 fungicide spray on the variety Crusoe to keep a lid on septoria, but still hopes to keep his fungicide spend at or below £100/ha after he drilled the crop late in the autumn.

His focus is on a T0 fungicide spray, often applied in late March, to give protective cover against septoria, as many fungicides are losing their efficacy in curative situations especially at later growth stages such as T1 and T2.

“We don’t want to get to T1 and be chasing our tails, we need protective cover now as we don’t have the curative action for later,” he tells Farmers Weekly.

Despite the Crusoe being drilled late, in the third week of October, and the variety having a good resistance rating against septoria, Mr Fraser and his agronomist, Todd Jex, are seeing plenty of septoria leaf blotch disease in the crop.

“We were surprised to see so much septoria, but we have only had a short cold spell at the end of January and it has been wet since then,” says Mr Jex.

The cold weather helped halt the spread of the other diseases, such as brown rust and to some extent mildew, but only held back the development of the wet-loving septoria for a short period of time.

Therefore, a protectant multisite fungicide, such as chlorothalonil, and a systemic azole mix will be used on the Crusoe field at the T0 fungicide timing.

Mr Jex, who works for agronomy group Agrii, has been focused on a five-pronged attack to reduce disease pressure, especially from septoria, in the spring.

“We are having to use these methods to try to reduce the disease pressure in the spring with the loss of efficacy from many fungicides,” Mr Jex says. 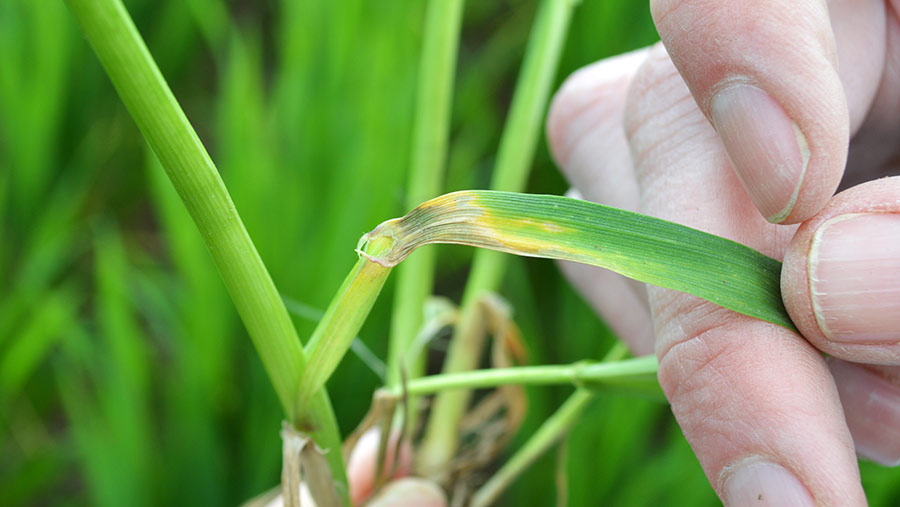 The effectiveness of key systemic fungicides – azoles and SDHIs – is declining, while the future of the widely used multisite protective fungicide chlorothalonil is unclear.

Mr Fraser’s family-run operation owns or rents and contract farms about 680ha of arable land from its base at Braeside Farm, Charlton, about 2 miles east of Shaftesbury on the Dorset/Wiltshire border, and is a contractor over an even bigger area. Soil types vary widely from clays through loams to very thin chalks.

To choose varieties he uses the AHDB Recommended List, supplemented by local trials data. Crusoe has been popular due to its high septoria rating of more than 6 and its consistency at harvest, and Mr Jex emphasises the importance of septoria resistance.

“Septoria is the driver for variety choice down here and anything below a 6 would be largely ruled out,” says Mr Jex.

But the area growing Crusoe and other milling varieties across southern England may reduce due to the closure of the nearby Hovis wheat mill in Southampton, which will force growers to face crippling transport charges to send their breadmaking wheats to other mills.

Sundance – despite its well-documented weaknesses of low specific weight and tall, weakish straw – has performed extremely well in the Dorset area. Mr Jex says it was top yielder in his group’s local trials, helped by the second-highest resistance rating for septoria on the Recommended List after newcomer Extase.

“In untreated fungicide trials, Sundance looked like it had a full fungicide treatment,” he says.

Dunston and Graham both show good septoria resistance. The former performed consistently, while the latter did well in the drought of 2018.

Extase with its top septoria rating of 8.1 looks interesting, but with only limited seed available for this autumn it could be more a candidate for autumn 2020 drilling.

Examining one of Mr Fraser’s field of Crusoe wheat, it was looking good in the early spring, but septoria was spreading in the crop.

Mr Jex’s approach to T0 fungicide treatments is to use the multisite protective fungicide chlorothalonil plus a less widely used azole such as prochloraz.

Prochloraz is classified as an imidazole within the larger azole group, but as most other azoles are triazoles, it may not increase the selection pressure on other more popular azoles.

He plans to keep the best septoria-effective azoles prothioconazole and epoxiconazole back for T1 and T2 treatment, while other azoles such as tebuconazole and metconazole are used for their good activity against rusts.

“The prochloraz is active on septoria isolates which are more resistant to prothioconazole and epoxiconazole, so can be useful at the T0 timing,” he says.

Mr Jex holds prothioconazole back for T1 as it is one of the two best azoles for septora and is also good on eyespot. If the disease pressure is low with a late-drilled crop, he may miss out an SDHI at this T1 timing.

“If the disease pressure is low, then a T1 could be a stacked azole such as prothioconazole and tebuconazole plus the multisite chlorothalonil,” he says.

Indeed, if using a highly resistant variety like Sundance which is drilled in late October, fungicide spend could come down to £90/ha using a T0 programme of chlorothalonil-azole, T1 of an azole stack + chlorothalonil and a T2 of SDHI + azole + chlorothalonil.