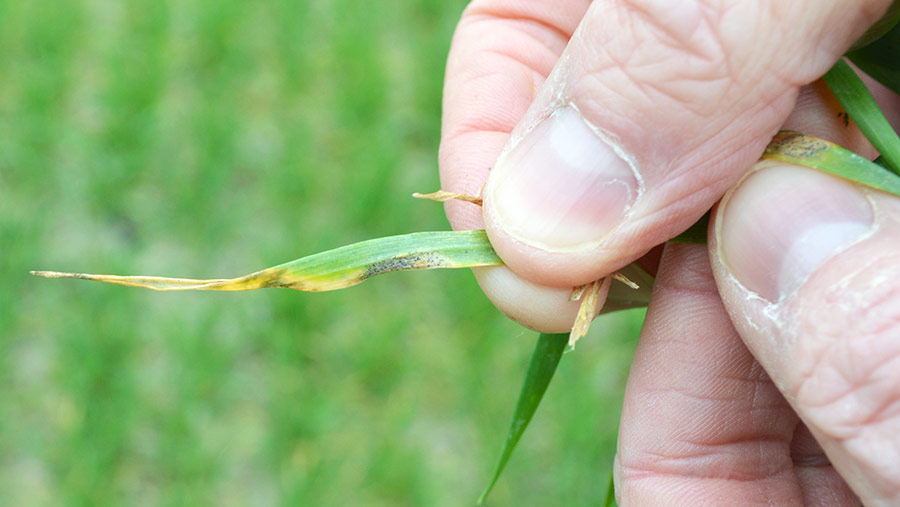 Sussex grower Will Hecks is planning to trim his early fungicide spend on his winter wheat this season after switching to more disease-resistant varieties.

Picking varieties such as Zyatt and Siskin that have good resistance to his main disease worry, septoria, he hopes to cut spending on his early T0 fungicide sprays.

While other more-susceptible varieties, such as Skyfall and Basset, will probably receive a multisite plus azole fungicide treatment, the Zyatt and Siskin might just get the multisite protectant against septoria.

“We are looking to move to more disease-resistant varieties and so not spend so much money on the wheat,” he tells Farmers Weekly.

Mr Hecks is pushing back drilling dates as far he dares on some of his heavy clay land to limit disease developing in the autumn and also put a brake on blackgrass spread, on fields where Skyfall yielded up to 11.5t/ha even in a drought year like 2018.

His land is near the English south coast and also in river valleys, so there is plenty of moisture hanging around – ideal conditions for the wet-loving septoria disease to develop quickly. 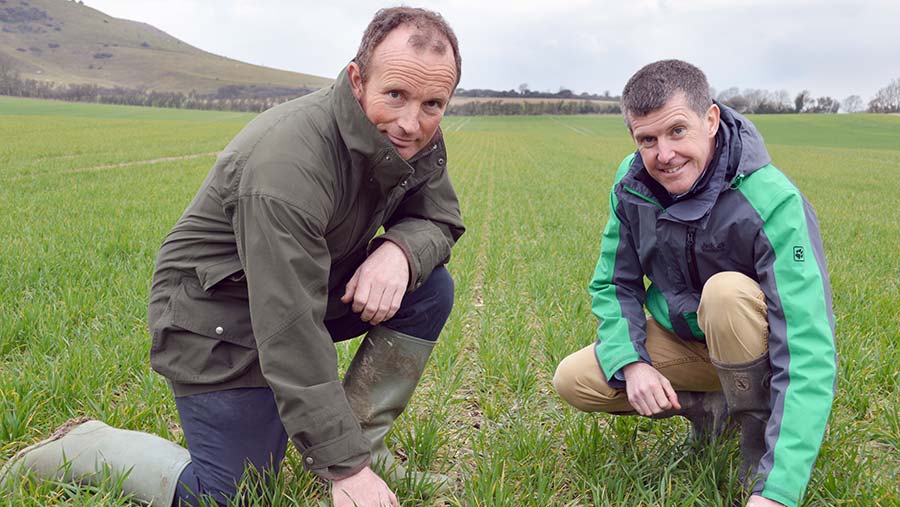 Will Hecks (left) and Mike Thornton

His agronomist Mike Thornton observes that the Zyatt and Siskin looked quite clear of septoria in early March, but more of the disease can be seen on the other two older varieties.

He believes that T0 fungicides, often applied in late March in this part of East Sussex, are key to keeping disease under control, especially as many fungicides are losing their efficacy.

“We don’t have the eradicant material we once had to deal with disease outbreaks, so we don’t want to be chasing our tails later in the season,” says Mr Thornton, who is head of crop protection at agronomy group ProCam.

His plan for the more septoria-susceptible varieties Skyfall and Basset is to use one or two azoles with a multisite like chlorothalonil. Two azoles, such as tebuconazole and prochloraz, are likely to be used for two reasons.

The first is for resistance management, as two systemic-acting azoles may control a wide range of septoria isolates. Second, with maize in the rotation there is a bigger threat of eyespot and prochloraz has good activity against this stem-based disease.

The multisite chlorothalonil will be used to help protect young wheat plants from septoria attack, while it is again useful in a disease-resistance management role.

Mr Thornton believes this focus on early disease control may pay dividends as cuts could be made later in the season, such as just using a tebuconazole azole at T3 rather than a more expensive tebuconazole–prothioconazole mix.

Mr Hecks farms 1,200ha with his father as HJ Hecks from Newhouse Farm, Firle, just 10 miles east of Brighton, covering very heavy land in the valleys to thin chalky soils on the top of the South Downs

The family farm grows 620ha of combinable crops, included 256ha of winter wheat with the rest of the land being grassland for a dairy herd, beef cattle and sheep.

Looking at his wheat varieties, Mr Hecks says Siskin is grown on the farm’s lighter land and drilled as late as possible, as the variety can be a little weak in the straw. It often has a plant growth regulator (PGR) added at the T0 stage.

“We will look at the standing ability of the Siskin and if we need a PGR then it might get a chlormequat mix to improved standing,” he says.

Drilling takes place from 20 September to the end of October and most crops are established using minimal tillage with plenty of manure applied. There is a focus on milling wheat, and Skyfall has done especially well on the farm.

Drilling dates have been pushed back, but on the heavier land where the Zyatt tends to be grown it is risky leaving the field work too late in the autumn.

“It is a fine line between drilling later and not getting a crop in at all, and spring barley is not often an option on our heavy land,” Mr Hecks says.

Septoria is the key disease to control along with a bit of mildew, and although the winter has been generally dry, there is still septoria to see in the field.

Mr Thornton says septoria is endemic even in this generally dry area of southern England and so an early start to disease control is essential.

Mr Hecks says the farm may try to replace Siskin with a new variety, Extase, which has even better genetic resistance to septoria.

He is still keen on Skyfall, as the variety is early to harvest, which is often important on a busy farm with dairy cows to calve and sheep to manage.