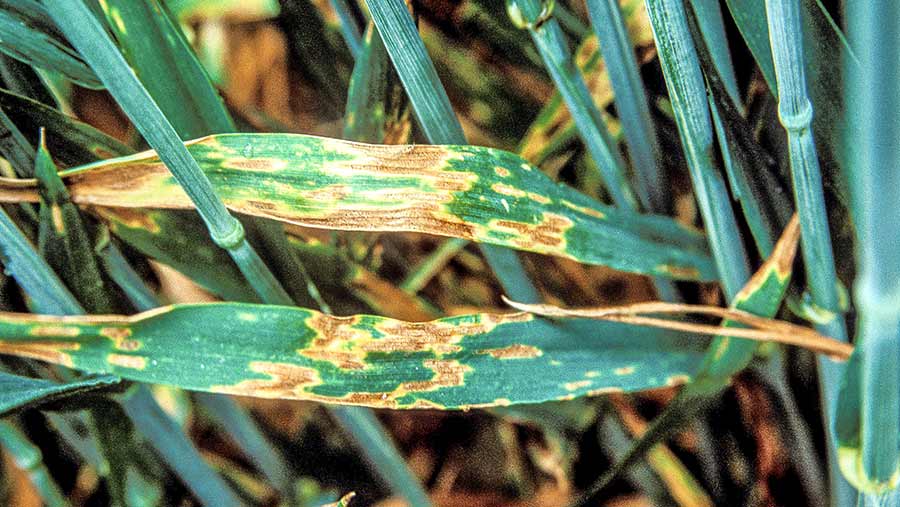 Septoria tritici is the most damaging foliar disease of UK wheat, causing yield losses which can range from around 30% to as much as 50% in high pressure seasons.

These losses are the result of a reduction in the photosynthetic capability of the upper leaf layers, due to infection occurring throughout the season.

Considered by most agronomists to be by far the biggest threat to UK cereal crops, septoria has come into even sharper focus as it has developed reduced sensitivity to key fungicides.

“It is the over-riding concern,” confirms independent agronomist and AICC chairman Sean Sparling.

“At the start of the season, we know that wheat crops are going to get septoria.”

Infection usually results from airborne spores moving into crops and landing on the leaves. This is followed by a latent period, when the fungus grows within the leaf, but no symptoms are exhibited.

The typical latent period for septoria is between 14 to 28 days. It can, however, vary in its length and it is affected by temperature – at higher temperatures, latent periods are shorter.

In the UK, the usual lifecycle for septoria is 15 to 18 days.

Once septoria is in the crop, the ideal conditions for its growth are temperatures between 15C and 25C, together with moisture. Warm, wet springs are perfect, which is why higher rainfall areas tend to have more problems with the disease.

After this initial phase, it then spreads up the plants by physical contact between leaves and by rain splash.

This makes it easy to recognise in the field, with the disease usually being picked up before Christmas.

As septoria progresses, the lesions join up to cover large areas of the leaf, turning it brown. When its development is rapid, water-soaked lesions will be present.

Lesions that are adjacent to a newly emerged leaf allow the spores to transfer very readily, giving a higher risk of infection. Those that are 30-40cm below emerging leaves are a lower risk, especially in dry conditions. 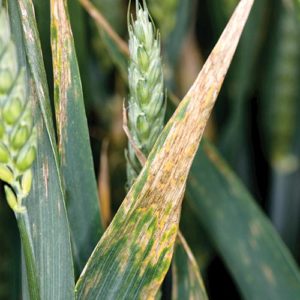 The declining effectiveness of fungicides, especially the azoles, and the threat of resistance to the SDHIs, is placing more emphasis on the use of an integrated approach to reduce the risk of disease.

As early September-sown crops are infected quickly by septoria, the disease has more time to develop in the autumn in favourable conditions.

This means drilling date is particularly important with susceptible varieties and will play an important role in a high pressure year.

Pushing the drilling date back into October is advised to reduce the crop’s exposure to inoculum.

In recent years, plant breeders have made good progress with introducing genetic resistance to septoria. While most of the winter wheat varieties on the AHDB Recommended List have scores between 4 and 6, there are now a few varieties with a rating of 7.

These can be used strategically to plan spray programmes and reduce the farm’s exposure to the disease in wet years, although they are still likely to need spraying and most will show a good response to fungicides.

Spray timings have been developed to protect wheat leaves, so that infections are unable to really take hold. This is because the crucial final three leaves are at risk as soon as they emerge.

Application timing is essential for success, as changes in the pathogen’s sensitivity to fungicides means it is no longer possible to spend your way out of trouble, notes Mr Sparling.

“Timing is so important,” he stresses. “Three weeks’ protection is as good as it gets from some fungicides, even at robust rates.” 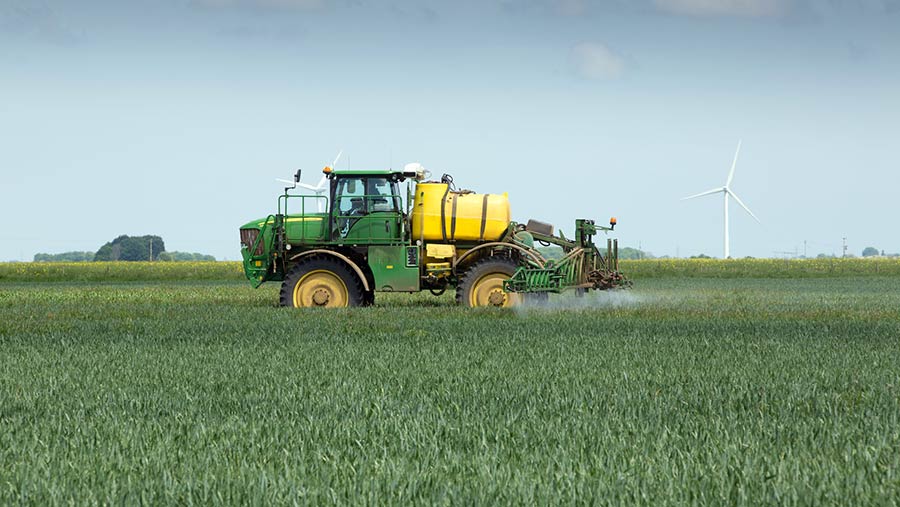 That makes attention to detail more important than product choice, he believes. “We have the tools to manage septoria, even though the disease is mutating.

“But getting behind with spraying is the worst thing you can do. It’s better to be a day or two early than a day or two late.”

The septoria fungicide toolbox is limited to three main groups: the azoles, the SDHIs and multi-sites.

Of those, the azoles have seen the biggest decline in performance, with their eradicant control dropping by over 60% since they were introduced. Despite the discovery of a few insensitive strains in 2016, the SDHIs are still giving good control in the field.

The multi-sites, which have been in use for many years, remain unaffected and have a low risk of resistance.

Other chemistry, such as the morpholines, can have some effect on the disease, but are not active enough against septoria to be used as a key component of a septoria strategy.

However, the strobilurins are ineffective against septoria, due to widespread resistance.

Given the developing situation with resistance and the complex nature of the disease, the multi-site fungicides are a vital tool for septoria management.

According to Jonathan Blake, principal research scientist at ADAS, they should be the first product into the tank at both T1 and T2 when it comes to septoria and should also form the backbone of any resistance management strategy.

“Chlorothalonil is an essential component. Although it can have negative effects on the curative activity of all products, the benefits of it outweigh any negatives.”

The T0 spray does very little for septoria control and it is rare to see a benefit from it where this disease is concerned if the T1 and T2 sprays are applied correctly, he notes.

“For other diseases, the T0 is more important and offers some insurance. But with septoria, the T1 and T2 timings are the main ones.” 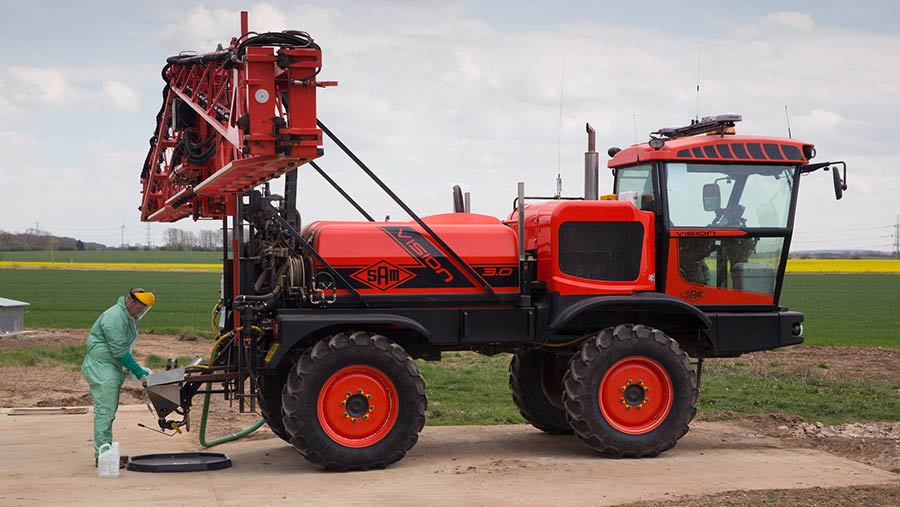 For Mr Sparling, the T0 spray acts as a holding treatment and buys some time if there are any subsequent delays, so he will often make use of chlorothalonil and a strobilurin at this stage. However, he accepts that the T1 and T2 sprays are more critical with septoria.

“Getting those two right is really important. The other spray timings are just frittering about at the edges.”

Bill Clark, technical director of Niab Tag, notes that there won’t be a yield response from a T0 in most years.

“But it offers some help if you don’t get the T1 spray right, so it gets applied for the flexibility it brings.”

Including an SDHI at T1

While most field situations will warrant the use of an SDHI at T2 in a three-way mix, the more difficult decisions about product choice come earlier in the season at T1, believes Dr Blake.

“The worst thing to do is to apply an SDHI where it is not needed, so try and keep two applications of SDHIs as the exception,” he says.

“At T1, an azole plus chlorothalonil mix may be adequate.”

However, growers in the West with susceptible varieties are likely to see a benefit from including an SDHI at T1, while others will do it for risk management purposes, he accepts.

At T2, it’s worth using all the firepower on offer, believes Mr Sparling, who will be planning to use one of the best SDHI products with a high rate of triazole.

“And if it’s a bad spring for septoria, I will have no hesitation in recommended an SDHI at T1 too.”

He advises growers to look at what they’re getting for their money. 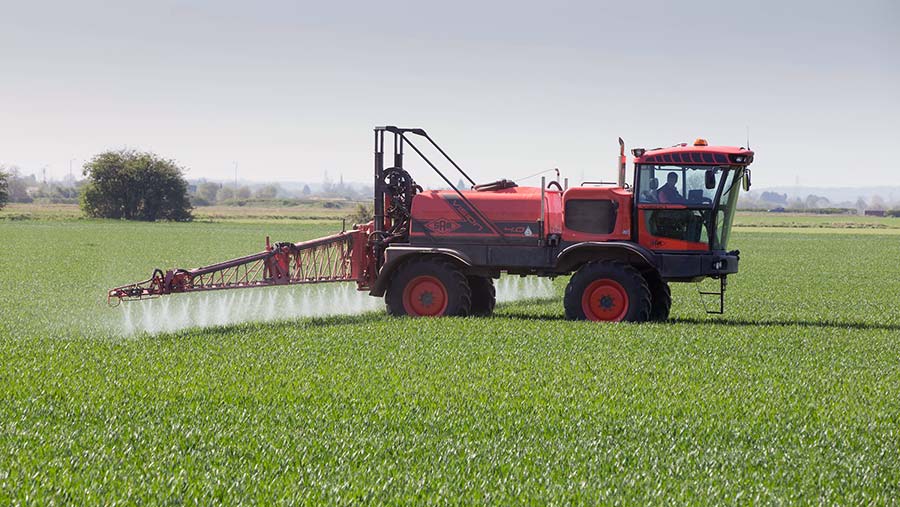 “There is more choice of SDHIs than ever, which then need to be partnered with either prothioconazole or epoxiconazole at a rate of 80-100%.

“There’s no need to be spending crazy amounts on fungicide programmes, but quibbling over an extra £3-£4 at the flag leaf timing is a false economy and pointless.”

If septoria control needs topping up at T3, an azole will do the job, with prothioconazole and tebuconazole being the main contenders.

Finally, all fungicide programmes used on wheat in 2017 must adhere to the guidelines on resistance management.

High-risk practices are thought to accelerate declines in sensitivity to both triazole and SDHI fungicides.