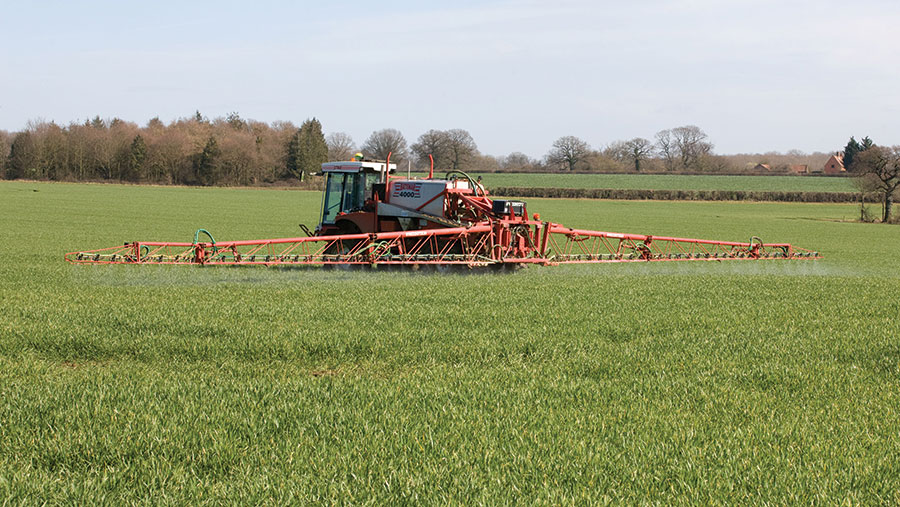 A T0 fungicide should be used this season on winter wheat crops that are already showing early signs of rust or mildew to prevent disease festering all season.

However, for most other crops this spring, growth will be so fast that a T0 will make little meaningful contribution to disease control.

A later drilling date combined with mild winter conditions means both yellow and brown rust are likely to be an issue for growers in the East this season.

Any signs of rust should be tackled early with a T0 spray, says Adas research scientist Philip Bounds.

He says a review by Adas 10 years ago revealed a correlation between a later sowing date and yellow rust levels, especially when there were less than five -5C frosts over the winter, making it a real risk this season.

“For brown rust, the worst seasons are when it comes in early, so for varieties with less resistance and later sowings there is a need to control it,” he says. “If crops have it, hit it early.”

Mildew will also be a problem if its not kept under control early, but both rust and mildew should be controlled if growers plan to use something for septoria at T0, such as chlorothalonil or folpet.

Out of rust risk areas, the majority of crops will have been drilled later than usual, and are therefore unlikely to need a T0, says Mr Bounds.

Crops that were not drilled until December or January will rush through their growth stages, however, this will make identifying the correct T1 spray timing very difficult, he says.

“On late-sown resistant varieties we rarely see a response from T0 for septoria, but it can be used as a management tool if the T1 spray is unlikely to be applied at the right time,” he says.

Keeping crops clean at the T1 timing will also be key to getting the most out of thin crops this season, says Bayer agronomist Gareth Bubb.

“Leaf three is going to be contributing more to yield this year than it would usually, so keeping disease out will be critical,” he says.

Mr Bubb adds that with a wide range of sowing dates and varieties in the ground this season, spray programmes will have to be decided on a field-by-field basis.

He suggests there will be two schools of thought this season on how to manage disease.

For some, the crops that are in the ground will be very high value, so growers are likely to want to protect the yield.

Meanwhile, others will be reluctant to spend out on a really robust programme if yields are already looking compromised.

“A programme should always be driven by septoria, so focusing too much on other diseases, such as rust, could let septoria in.

“Look at what covers all of the bases,” he says.

He adds that if growers are thinking of giving up on a crop, it should be winter barley crops, which have wet roots.

“For wheat, try to keep it greener for longer.”

Assistant farm manager Jack Hopkins plans to use a T0 on his early-drilled crops this season, as he expects there to be disease in the crops after the wet and mild winter.

He plans to use up some chlorothalonil at T0 if conditions are good enough to travel, as he expects there to be a higher disease level in the crops right from the start.

“Where crops are not so good, the skill this season will be deciding how to treat them,” he says.

Mr Hopkins will look at the yield potential of his winter wheat crops at Lower Hope Farm, Herefordshire, and work backwards, cutting his programme to match lower plant numbers.

“We will be judging the potential of the crop and not just throwing inputs at it.”