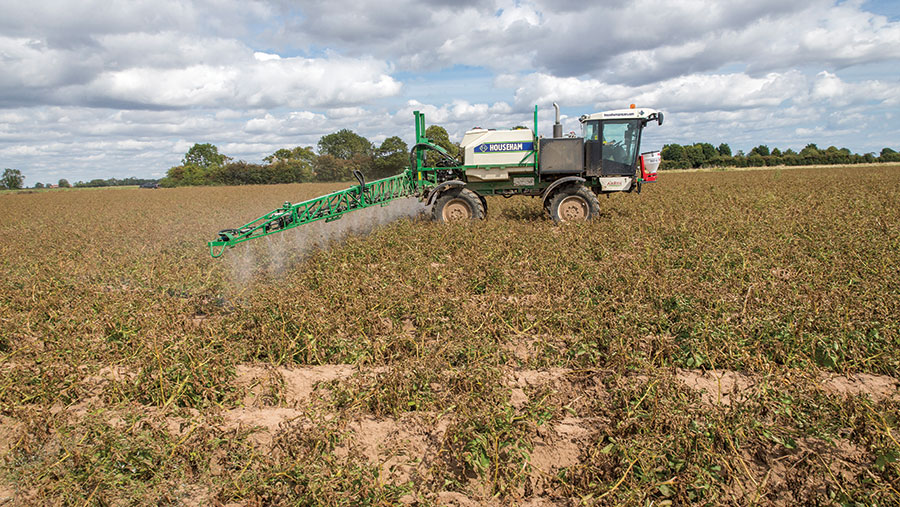 The loss of diquat means potato crop desiccation will be a longer and more protracted process, which could increase the risk of late-season diseases such as tuber blight and rhizoctonia.

Rapid burndown of potato haulm was a valuable tool in helping manage disease, by rapidly removing foliage that could be at risk from virus-carrying aphids and blight.

Therefore, disease programmes may need changing for the latter part of the season.

Here we ask three specialist potato agronomists for their thoughts on managing disease in crops desiccated without diquat.

It’s not that easy to sit at a desk while “self isolating” to put pen to paper and try to predict what is going to happen to the potato crop at the end of this season. However, I will have a go.

Firstly, how should we manage nitrogen inputs? It is likely that soil nitrogen availability will be on the low side due to the autumn and winter rainfall, so without doing any soil min N testing, we are in the dark.

If we apply too much nitrogen, crops will be difficult to kill before harvest, skin set might be delayed and there is a risk of disease – either from late blight or dry rot/gangrene on the back of damage at harvest.

When thinking about nitrogen, always take account of manures. You can always apply more nitrogen, but if you put it all on at once, you can’t take it off.

Where possible, for maincrop potatoes, I have always preferred to put two-thirds of the N requirement in the base, with the rest going on around tuber initiation. For salads and seed, all go on in the base.

It is worth remembering that nitrate N is mainly used by the plant for foliage production.

We don’t harvest foliage, so we only need enough to achieve full ground cover and maintain that cover long enough to allow the crop to bulk and achieve the desired size for the market.

It goes without saying – but I will say it anyway – that one poorly timed cultivation will compromise rooting and nutrient availability, so it is crucial to check that cultivations are not being carried out at depths where the soil is at or beyond its plastic limit.

Secondly, we need to manage disease. Consider rhizoctonia, black dot and verticillium (known as the early dying complex) – all of which can attack the root system and affect yield and quality.

These can often be exacerbated by the presence of free-living nematodes and potato cyst nematodes, therefore, managing these pests is also crucial.

Late blight populations seem to change from year to year, but one thing is for sure, we need to have a robust anti-resistance strategy in place where different active ingredients are mixed, targeting the right products at the right time.

Tuber blight will always be a worry and, with the loss of diquat, crop canopies may be greener for longer. It is therefore important to understand which products are active on tuber blight.

I avoid the use of fluazinam products due to resistance concerns and rely on Ranman Top or Shinkon/Gachinko and Infinito.

Care needs to be taken to minimise resistance. Ranman Top and Shinkon/Gachinko are in the same resistance group, so a maximum of six applications can be made. Planning the desiccation process to include applications of these products will be vital.

Our first growing season without diquat is finally upon us, after 18 months of constant debate on how we are going to manage crops after this valuable active ingredient has gone.

What is clear from discussions, and backed up by trials, is that both desiccation and disease control begin at the planning stage.

An extended burn-down period leaves the crop at risk for longer and attention to detail is paramount through this phase. Gone are the days of a two-spray approach anytime in the summer or autumn.

My expectation, following Agrovista’s trials of desiccation without diquat, is that the burn-down period will start slightly earlier and finish slightly later to hit the same bulking targets for each crop’s end market.

Nutrient application is the starting base, with nitrogen the key focus. If a crop becomes deficient in nitrogen late in the growing season, Altenaria solani will be the main risk.

However, historically, luxurious doses of nitrogen are often used. So, in most cases, there is room to make small downward tweaks to dose rates to aid quick and effective desiccation without loss in yield or quality.

Tissue testing of the crop has become a valuable tool in a grower’s armoury. This allows accurate and speedy analysis of what is going on within the plant, which hidden hunger is holding back yield, and what could be leaving the crop open to disease.

Magnesium, manganese and sulphur are all often deficient as the crop grows quickly. Remember that a healthy plant is far more robust at combating disease, especially late on in the year.

A new and popular tool last season was biostimulant Equilbrium, which is formulated from amino acids and seaweed extract. This product is a stress reliever and can really lift a backwards crop or push yields in a standard crop.

An extended desiccation period leaves the crop susceptible to aphids, with the plant at risk until there is no longer any green tissue in the field, including stems.

This is an important factor for seed growers, but my main concern would be home-saved seed from a ware crop, where the focus may not be on aphid control.

Regularly monitoring the crop and ensuring phasing in of insecticides allows room for extra applications late in the season, with alternating modes of action being key.

It wouldn’t be a potato article if I didn’t mention blight at least once.

With extended desiccation, blight risk is also extended, with a real chance of zoospores being present in later-season crops, when conditions turn cold. 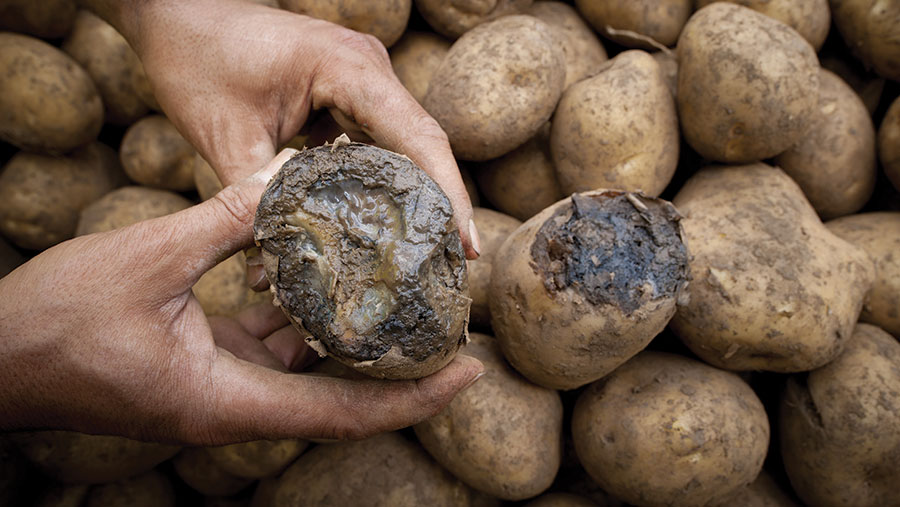 Poor timing or using products without soil activity drastically increases the risk of tuber blight, which brings most growers out in a cold sweat.

Cyazofamid will be my main recommendation to control tuber blight, within a sequenced approach to protect the active and ensure optimum control.

With the loss of diquat and as some extremely aggressive blight strains are now widespread, the risk of tuber blight could be high if, as expected, haulm death is slower than growers are used to.

Trials at AHDB sPot farms last season demonstrated that PPO-inhibitor herbicides Gozai and Spotlight take seven to 10 days longer than diquat to achieve complete kill. Not attaining complete kill as fast as with diquat is a serious concern.

There were significant levels of tuber blight around, and even a low level (<5%) in a crop can spell disaster. Therefore, in a non-flail situation, crops may well be at greater risk, as some leaf and stem remained in certain trials after 21 days.

The industry is aware that blight sprays need to be used with desiccants, as even 0.5% green leaf area can result in severe infection, which means growers will need to use more fungicides during burndown.

We already have a reduced armoury against tuber blight, as fluazinam is now much less effective on 37 A2, so we need to have a strategy to protect the remaining actives with tuber light activity.

The most reliable are the Qii fungicides and Infinito.

We face a situation where we could see 50% of the Qii allocation being applied after burndown and we really need to avoid this, as the risk of selecting for resistance is the major concern in the years ahead.

We see situations where burndown can start as late as early October, but this is going to leave growers in a really tricky situation, because dull, cool conditions do not favour the activity of the desiccants we now have.

PPO-inhibitor herbicides need bright light to be effective. Even spraying in the evening rather than at midday can make a big difference in the control achieved.

As far as preparing crops for effective flailing, we do need to reduce lodging. This means nitrogen must be managed carefully, but this is easier said than done.

A knee-jerk reaction to simply reduce N should be avoided, as we have just experienced a very wet winter. The 2019 season followed a very dry winter with higher soil mineral nitrogen (SMN) and 2018 crops faced severe drought, so what do we use as a benchmark?

RB209 gives guidance, but a lot of varieties will be grown this year with no real guidance on crop maturity and N requirement and this is far from ideal.

After the wet winter we have just had, SMN levels will typically be lower than last spring, so a 30kg/ha reduction from last year will be achieved by changing nothing. Soil conditions also need to be considered, as they are rapidly going from very wet to dry and hard.

While SMN and applied N are a major factor in canopy duration, we also found in 2019 that the provenance of the seed played a big part in effectiveness of haulm destruction.

We saw earlier-than-expected senescence in many crops, despite higher-than-average soil N, and seed produced from crops that suffered extreme heat seems to have been a major factor in this.

When we consider all the variables we have seen in the past two seasons, it makes it very hard to know what to use as a benchmark.

In 2018, we had crops flowering in September after the drought, which followed a wet winter, but in 2019, the exact opposite happened. All we can do is use the information we have and make the best estimate for the current season.