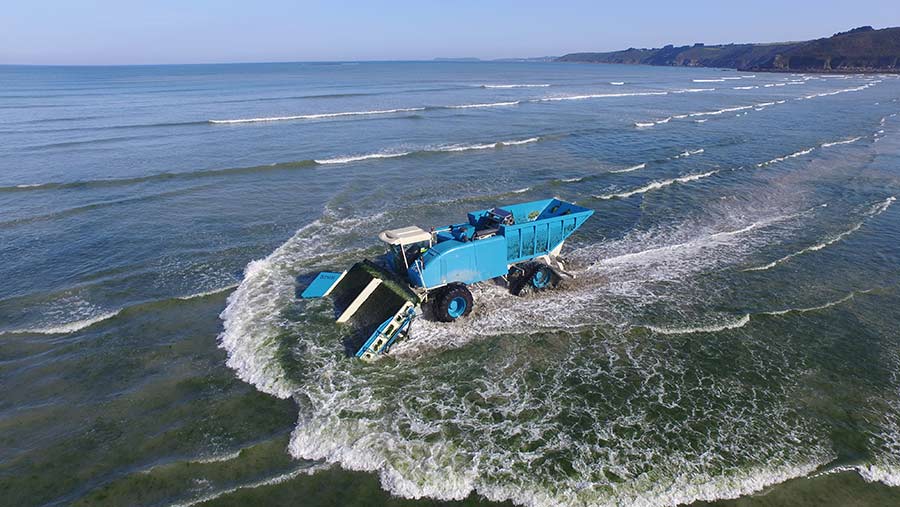 Seaweed gathered from French beaches could have the potential to end UK farmers’ reliance on fungicides in arable crops by stimulating plants to protect themselves from diseases.

Olmix, a leading European producer of micro-nutrients and clay products for animal health, has spent 15 years and nearly £7m of its turnover on research into the seaweed, which grows round the coast near its headquarters in Brittany.

This research has resulted in the production of biofertilisers and biostimulants containing seaweed extracts which, when used with good agronomy practices, Olmix says can form the basis of an alternative natural plant protection strategy.

The Seatech range, launched in 2015, is now allowing conventional farmers to position themselves ready to take advantage of new emerging markets for more sustainably produced crops.

Such farmers have started using the seaweed-based biostimulants on their crops to either dramatically reduce their use of, or completely cut out, chemical fungicides.

Brittany is a hotspot for seaweed biodiversity, with 3% of the world’s species, including several red and green species, which are not typically used in seaweed-based fertilisers.

Maria Matard-Mann, research project manager at Olmix, says the company’s research has revealed that the harsh environment provided by the Channel has made this seaweed particularly resilient to abiotic stress – something that can be harnessed to help crops.

The Channel between Britain and France has tidal differences of 10m rather than the 2m experienced on most coastlines, and is a constantly chilly temperature all year.

Seaweed can withstand four hours on the beach in the sun, and then return to the sea with no ill effects, making it perfect for tackling drought-stress.

Red seaweed is very high in potassium, and also has hormones that can stimulate both root and plant growth, and improve nutrient absorption by plants.

This results in increased flowering, and higher yields of a better quality.

Terrestrial plants, such as arable crops, do not contain any sulphated polysaccharides and, therefore, recognise the harmless carbohydrate molecule as a threat.

Plant cells respond to them the same as they would to an attack by a disease by thickening their walls and closing their stomata (openings), despite suffering no ill-effects from the molecule.

If crops can be stimulated to protect themselves at key disease timings through the application of a seaweed-based biostimulant, then they are more likely to be able to naturally resist disease without the help of chemical fungicides.

However, plants don’t have the ability to develop immunity and will need to be repeatedly stimulated at key times.

As well as being completely natural, the seaweed collected by the company is considered a waste product in France when it is collected from the beaches.

France harvests 80,000 tonnes of fresh seaweed each year, 90% of which is collected from Brittany.

Currently, Olmix collects and processes 30% of the fresh French seaweed used in agriculture, with this amount expected to increase.

Despite the increase, harvesting of this type of seaweed is sustainable as it is collected from the beaches at the end of its life-cycle, and as one of the fastest-growing plants in nature – a rate which is increasing due to climate change – the effect on the environment is negligible. 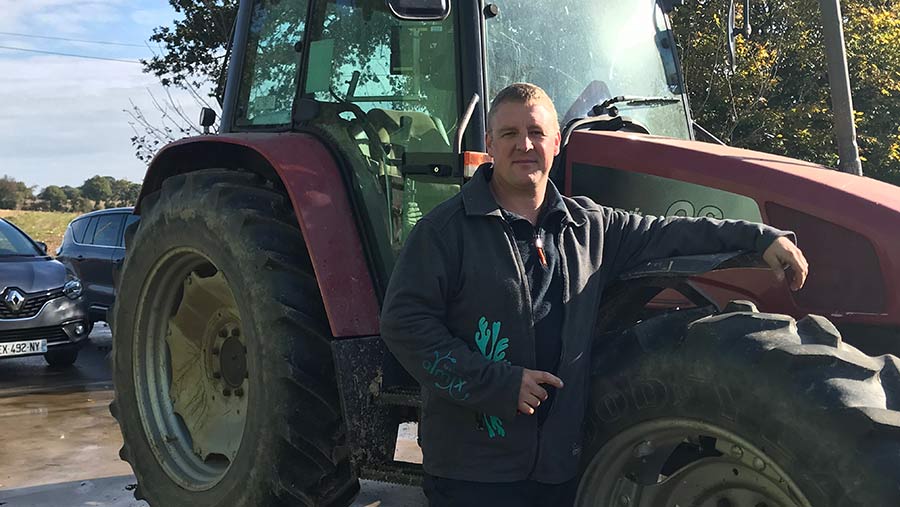 Brittany farmer Fabien Bucher believes consumers will be willing to pay more for food produced in a sustainable manner with less use of chemical pesticides.

In readiness for this new market, he has already made the switch from a plant protection strategy based on chemical fungicides to one based on the use of natural seaweed extracts.

To protect against the key wheat diseases in the area – septoria and yellow rust – Mr Bucher is relying on three applications of Olmix’s Algomel biostimulant range; applied at growth stage 31, growth stage 32, and then at the flag leaf timing.

By choosing to grow varieties with high disease resistance over those with the highest yield, Mr Bucher keeps the disease risk as low as possible.

He says the additional boost provided by the seaweed to a variety with good genetic resistance allows him to control disease just through spraying low doses of fungicides as soon as any symptoms are seen in the crop.

While the opportunities for promoting the sustainable credentials of his cereals remain limited for the moment, he can already use them as a marketing tool to keep the price of his potato crop higher as he sells direct to consumers.

Mr Bucher still hits key timings with his blight sprays as late blight is an issue in the area, but he has been able to cut his fungicide use by between 40% and 50% by using three applications of Algomel.

Despite this reduction in chemical fungicides, Mr Bucher is achieving between 35-40t/ha for his potatoes.

For the seaweed to work to its fullest potential, it needs to be used alongside good agronomy practices, so Mr Bucher has also shifted away from ploughing towards min-till by adding Geo2, a biological activator containing trace elements such as manganese, copper and boron to his soil.

After first applying limestone to correct acidity, a yearly application of between 250kg/ha and 300kg/ha of the product to his fields has corrected compaction and improved the overall structure of is soil, and has seen better transformation of organic residues on the soil transformed into humus.

By reducing the number of mechanical interventions undertaken on the farm, Mr Bucher has cut his operational expenses by 20% in comparison with other farms in the area.

Having moved to minimum tillage, Mr Bucher has also started using between 0.5-1 litres/ha of liquid biostimulant Agroptim to protect his crops against the toxicity of herbicides on all of his crops. 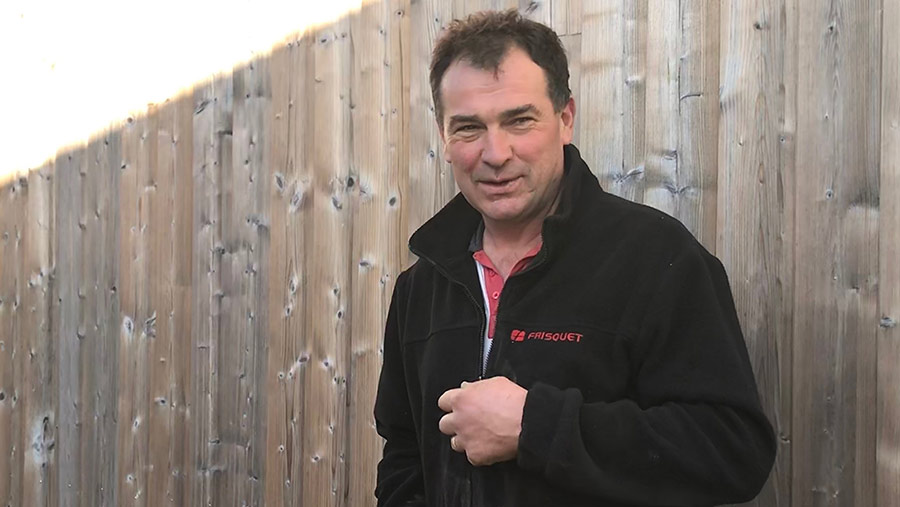 In a 5ha trial at Earl des Fromentoriaux farm, at Le Faux, Guilliers in Brittany, just one tramline received three applications of fungicides, while for the rest of the trial, this was replaced with three doses of Algomel.

The tramline with fungicides yielded 9.5t/ha, while the area that just relied on the stimulation by seaweed extract yielded 9t/ha.

While it was not a big year for disease, fusarium was a problem at the end of the crop cycle, with even the area that received fungicides touched by the disease.

Mr Sable will repeat the same acreage of trial again this season, with the trial also to be expanded across 10 farms.

Similarly, on his 4ha area of potatoes, the eight fungicide sprays were replaced with seaweed, and yielded 37t/ha compared with 40t/ha using fungicides, with no issues with quality.

Mr Sable says: “The price of fungicides is the same as the Algomir seaweed product, but the objective is to have a better price for potatoes due to not using any fungicides.”