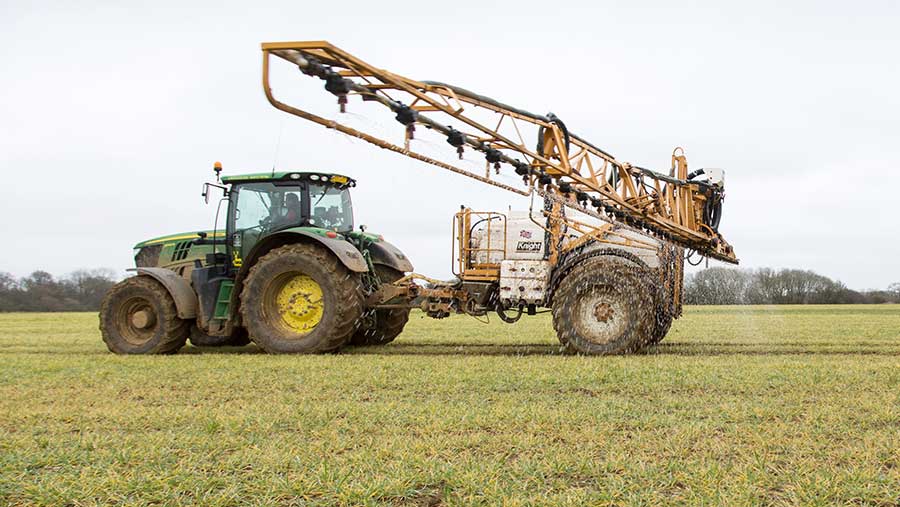 A high-input strategy for crop protection products is generally essential in order to hit top yields in high-disease-pressure situations, but one grower has set out to prove this does not have to be the case.

This season, disillusioned with this high-input, high-output strategy, Cornish grower Nick Dymond trialled growing a crop of winter wheat with zero chemicals, and achieved 9.2t/ha – just shy of the yield “ceiling” in the area due to septoria pressure.

Encouraged by the results, Mr Dymond is now scrapping his full chemical programme in favour of a low input approach, instead focussing on nutrition.

Mr Dymond contract farms 406ha near Truro, of which 162ha is combinable cropping and the rest is in maize, grass and brassicas.

Being in the wetter West, where septoria and mildew are prevalent, Mr Dymond’s total chemical spend is traditionally between £250-£270/ha, but top yields of 10t/ha were only being achieved one year in six or seven.

“Yields of 7-8t/ha is breakeven around here; 10t/ha provides a margin, but it’s too difficult to consistently hit,” he says.

But static yields and the struggle to stay profitable are only part of the issue. “It isn’t just about profitability. As I get older. my goals have changed – I’m increasingly disappointed with the state of human health.

“What we are doing is probably degrading soils and there is the increasing amount of active ingredients being used, which is not far beyond the realms of reason to fear that it is causing a negative impact on human health.

“I’m not organic, I’m very much a conventional farmer, but like so many non-organic growers, I feel this route is unsustainable.”

Instead, Mr Dymond has teamed up with independent agronomist Will Iliffe to trial an alternative approach based on the work of Australian agronomist Graeme Sait, using plant nutrition to combat disease.

Rather than firefighting with chemistry and routinely applying one or two nutritional elements, more money is spent on conducting comprehensive soil tests and addressing any issues before planting.

Throughout the growing season, leaf sap testing reveals the nutritional needs of the crop, allowing specific nutrients to be applied before deficiencies weaken the plant.

“The idea is to keep them robust, the theory being disease will pass over a stronger crop in favour of a weaker one.”

But Mr Dymond says the aim of the trial is not really to improve margins and increase profitability.

“The more I read about people who concentrate on soil health, the more I realise that profitability takes care of itself.

“If you do what feels right, providing that is working with nature, then profitability falls into place.

“The theory of profitability centres around cashflow anyway, but as soon as you start farming around the environment and making long-term decisions and investments in the land, then there often is no hard-and-fast figures to put on a spreadsheet for what that is worth. It is hard to quantify.”

Three different approaches were trialled across 12ha using feed wheat variety Graham, which has a high resistance score to septoria.

With the use of just one pre-emergence herbicide the zero-chemistry approach crop yielded 9.2t/ha, leaving the full chemical approach trailing at 8.7t/ha and smashing the original target of 5t/ha.

While the unusually dry and hot weather this summer meant the septoria risk was undoubtedly lower overall, Mr Iliffe says it did peak at two points; early on in the season before the weather dried up and again in early June.

“We didn’t know where this was going to go. Early on I was concerned about the level of septoria, but we got that under control,” Mr Iliffe says. “Im absolutely over the moon with the results.”

The yield is even more impressive, he explains, as the reduced and full chemical trials were carried out on 9ha and 10ha, respectively, compared with just an 0.8ha field for the zero-chemical approach, so should have yielded more through the sheer size of the field and less headland.

The zero-chemical approach also produced 25% more straw in the absence of plant growth regulators, but despite this increased height, the crop didn’t suffer any lodging, which Mr Dymond believes is down to the correct nutrition.

“We were concerned about everything. Nobody had ever done something like this and we warned the owners it could have produced 2-3t/ha – it could have been a complete disaster,” he says.

Mr Dymond is so impressed with the results from just one year he plans to drop the full chemical approach for next season and instead run the trial across his full 200ha of wheat, split equally between zero-chemical and reduced chemical approaches.

“It might be, but I don’t think it was a fluke. Either way I don’t want to keep using that much chemical,” he says.

The trial has sparked a huge amount of interest among local farmers, many of whom have been to see the trial and now plan to conduct their own.

Mr Dymond plans to continue with the reduced-chemistry and full-nutrition approaches, despite this providing slightly less margin than the zero-chemical approach, as most farmers in high-disease areas feel they have to use some chemicals.

“There is huge interest down here in trying to use organic ideas without having to sacrifice output and without the transition period.”

The duo also plan to reduce the amount of nitrogen applied in the trial this coming season by 20-25% to instead focus on micronutrients.

Mr Iliffe says this will have the added benefit of making the crop more weather resistant, as nitrogen increases water uptake by the plant and can leave it vulnerable.

Are you a Trailblazer?

This new series aims to showcase arable farmers who are ahead of their time and are trying new approaches, whether its growing new crops, taking a radical approach to growing oilseed rape, or being a pioneer in the use of new technology.

If you know of any farmer or wish to be featured in this series, contact the arable editor at richard.allison@reedbusiness.com