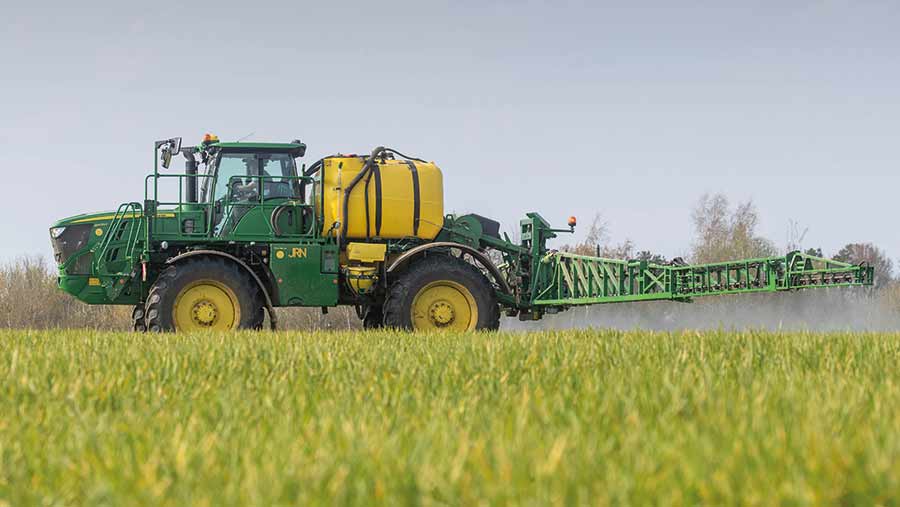 The key message from on-farm trials using two alternative fungicides is that they offer useful activity on septoria in wheat, but advice on how they are utilised requires some refinement.

In the 2020-21 harvest year, a group of farms in Norfolk set up field scale disease control trials to test two products that offer the potential to reduce conventional fungicide use (see table).

The products included Thiopron, a relatively new liquid formulation of sulphur, and Iodus, which is a plant defence elicitor containing laminarin.

Last season was tricky for disease control trials, with a very cold and dry start to spring across the UK. Septoria progression was slow and disease levels were low until late May.

Septoria sparked into life in the warmer and wetter June, with the epidemic peaking in early July and causing high levels of visual disease in some crops.

The conventional chemistry used in the farm standard treatment at Holkham held on to green leaf area more effectively in varieties Wolverine and Gleam than the biological or mixed programmes.

However, when considering yield – which was recorded on the estate’s John Deere combine – the drop off where a biological or mixed programme were used was not as severe as Mr Green predicted.

In the Wolverine, the farm standard achieved 9.74t/ha, with the mixed programme 9.19t/ha and the biocontrol programme 8.72t/ha.

In the Gleam at Holkham, the farm standard achieved 11.16t/ha, the mixed programme 10.62t/ha and the biocontrol-only sprays 10.06t/ha.

Following a similar pattern, on Extase at Jimmy Goodley’s farm in East Barsham – where Mr Green also advises – a yield of 10.54t/ha was achieved with the farm standard, compared with 9.66t/ha and 8.95t/ha for the mixed and biocontrol programmes, respectively.

“When you look at margin of fungicide costs, they have brought enough to the party to more than cover the expense,” he says.

“The biocontrol programme achieving 8.72t/ha in the Wolverine is certainly much better than I expected before we started the trial.”

It is difficult from Holkham and East Barsham to get a grasp of exactly what the biologicals are adding.

However, at a third neighbouring farm, where no conventional fungicides or insecticides are used, an untreated area was, in effect, the farm standard.

Here, the biological programme yielded 6.2t/ha compared to 5.82t/ha in the untreated blend of Extase and Siskin, and gives an indication of what it contributed in 2021.

“It proved to me that Thiapron was giving some control, whereas in some other situations it was hard to pull apart because you had no untreated control,” explains Mr Green.

So what lessons does he take into this coming season?

Craig Green admits the sulphur rate used in the trials was high at 9 litres/ha and would be a tough logistical ask for sprayer operators over large areas.

He says that the Adas work in the same season (see box) gives him the confidence to use a lower rate of 3 litres/ha.

In recent seasons, he has been using historical and live data from local weather stations to judge when to apply fungicides and which dose rates to use.

He says this could guide him on when to use sulphur in a “little and often” approach.

“The T2 got delayed last year, as cold temperatures slowed flag leaf emergence. That meant there was a big gap from T1, leaving leaf two exposed.

“It could be handy to use sulphur to protect leaves in between main timings in the future, as long as it is in accordance with the label.”

Overall, Mr Green would be happy to replace other multisite products within his wheat programmes with Iodus and Thiopron at T0, then a further two applications as the weather data dictates.

“I think they can do equally as well as folpet, but should be used alongside conventional chemistry at the main timings, unless you are taking a wholly biological approach.”

In 2020-21, Adas conducted replicated trials in Yorkshire, Cambridgeshire and Herefordshire looking at sulphur and laminarin in disease control programmes.

It compared  sulphur fungicides and folpet, and looked at the role of laminarin at T0. Septoria control and yield on varieties Santiago, Elation and Basset were assessed, with products applied at different timings and rates through the season.

On average, both multisites had positive effects on septoria control and yield when used alongside conventional programmes.

Adas arable crop pathologist Rebecca Joynt says there was little to separate the two multisite products. But adding them into the programmes gave more benefit than increasing single-site chemistry rates.

There wasn’t often a significant dose response to either product, with sulphur applied at 2 litres/ha and 3 litres/ha, and folpet at 1 litre/ha and 1.5 litres/ha.

The T0 trials are difficult to execute and often don’t produce data that allow significant conclusions to be made.

It was particularly tricky in 2020-21 – the dry, cold April and low temperatures throughout May led to the septoria epidemic arriving much later than typically expected.

At some sites, Ms Joynt found that adding T0 sulphur and folpet treatments to a base programme of Proline-Ascra did offer a septoria control benefit and yield response, despite low disease pressure.

At all three sites, the addition of a T0 Iodus to this programme gave a yield benefit, ranging from 0.08t/ha to 0.42t/ha, although it was not always statistically significant.

However, she cautions that more work is needed across differing seasons and sites to fully understand the role of Iodus in a programme.

“This season, we will be looking at what the various products offer when used in a broader range of fungicide programmes and on varieties more resistant to septoria.”