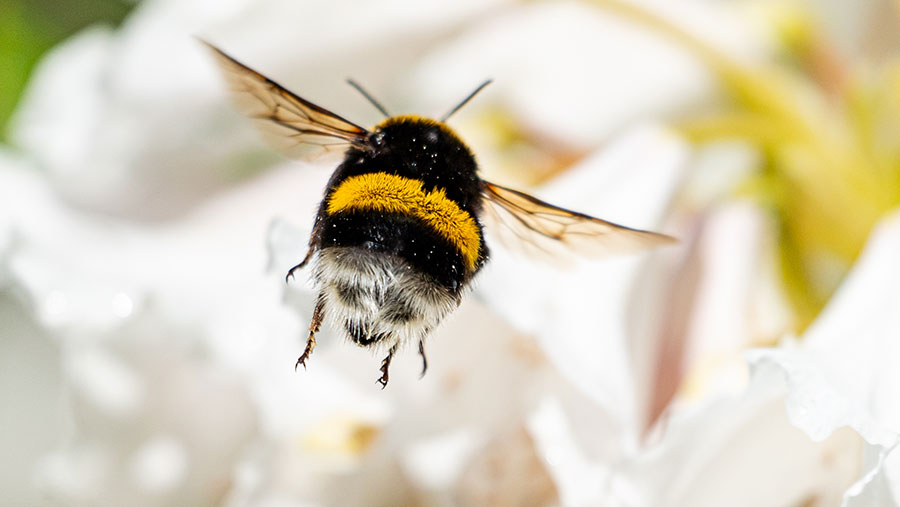 A co‑formulant widely used in azoxystrobin fungicides has been found to significantly affect the health of bumblebees, prompting calls for a change in the way new products are assessed.

Researchers from Royal Holloway, University of London discovered that exposure to the co-formulant alcohol ethoxylates can cause severe gut damage, which can lead to a lack of appetite, weight loss and mortality in bumblebees.

Ed Straw, PhD researcher at the University, said exposure to alcohol ethoxylates was found to cause a 30% mortality rate in bumblebees, as well as a range of other sub-lethal effects.

“The study demonstrates how co-formulants can drive the toxicity of a product and put vital bee populations at risk,” he said.

See also: Farmer Focus: The wheat is in – now to get nutrition right

Researchers fed the commonly used fungicide Amistar, containing the active ingredient azoxystrobin, and each of its individual ingredients to a number of bumblebees.

“We found the co-formulant alcohol ethoxylates caused the entire damage. Azoxystrobin was not causing any harm at all and neither were any of the other ingredients,” said Mr Straw.

“While 30% of the bees exposed died, the other 70% were far from healthy. They had damaged guts, were eating about half as much food and were losing weight.”

Currently, chemical regulation focuses on the active ingredients in products and their effects on bee health, leaving co-formulants such as alcohol ethoxylates overlooked as potential threats.

Mr Straw suggested the regulatory regime be updated so chemical co-formulants are tested more stringently to ensure they do not have negative effects on insect or bee populations.

“Plant protection products are subject to one of the most stringent regulatory regimes of any product.

This regulatory regime ensures that no product is authorised if it is found to pose an unacceptable risk to the health of bees or other pollinators.

“This laboratory-based study does not replicate realistic conditions of exposure or dose rates and, rather than using the formulated product that bees might be exposed to in the field, it takes a single co-formulant in isolation.”

He added that the co-formulant identified in the study, alcohol ethoxylates, was used in a range of consumer products such as laundry detergents, cleaning products, cosmetics, textiles and paper and, as such, was widely regulated.