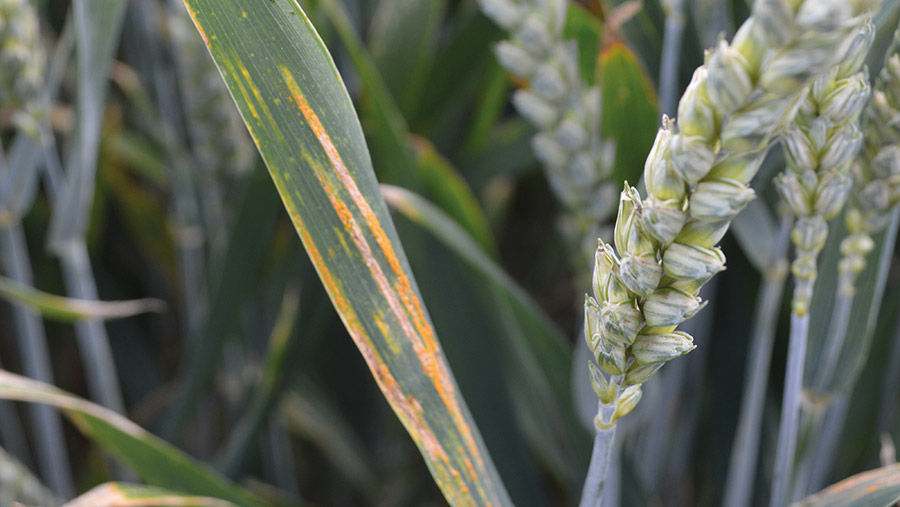 Wheat growers face a tougher battle against yellow rust this spring due to many races of the disease being suspected within crops and a key rust fungicide being banned.

Crop experts say that there are clearly more races of the disease than have been already identified, and yellow rust was seen in some winter wheat crop well before Christmas.

In addition, sales of one of most effective fungicides against yellow rust – the azole epoxiconazole – are now banned, making control more difficult of a disease which can cut wheat yields in half in a bad year.

Bill Clark, technical director at crop consultant Niab, is seeing the disease in popular varieties such as Zyatt, Skyfall and Spotlight, and if the disease is spotted, he advises that it needs to be treated.

“Growers need to treat what they see in the field, as we are seeing plenty of yellow rust in a wide range of varieties,” he tells Farmers Weekly.

A number of popular winter wheat varieties, such as Gleam, Zyatt and Skyfall, have had their resistance rating cut sharply, meaning they are now more susceptible to the foliar disease.

Front-line fungicide control largely relies on two azoles – epoxiconazole, which can only be used if the product is on farm as it is in a use-up period, and tebuconazole, which has an uncertain future and may only survive for a couple more years.

Epoxiconazole has been in the regulatory spotlight for a while, and it has now been classified as an endocrine disruptor that poses a risk to human health and the environment.

Yellow rust is seen as the second most serious yield-sapping disease of wheat after septoria, but along the east coast of Britain from Kent to the top of Scotland it is often the most serious disease threat.

Cold, damp weather in the spring, with overnight dew or rain, provides the best conditions for the disease to spread, with characteristic symptoms being parallel rows of yellowish orange coloured pustules on adult plant leaves.

Heavy frost can kill the pustules, but mycelium – or the vegetative part of the fungus – can survive temperatures of minus 5C. Low temperatures may also kill infected lower leaves and, therefore, the fungus.

The coldest January for 10 years in 2021 and freezing temperatures into early February will have slowed down the disease’s spread, but as the rust race spores travel from the Himalayas on the prevailing winds, they are used to cold.

Heavy snow can act as an insulation for many crops, so it is hard, snowless frosts which are the best conditions for reducing the disease’s spread. 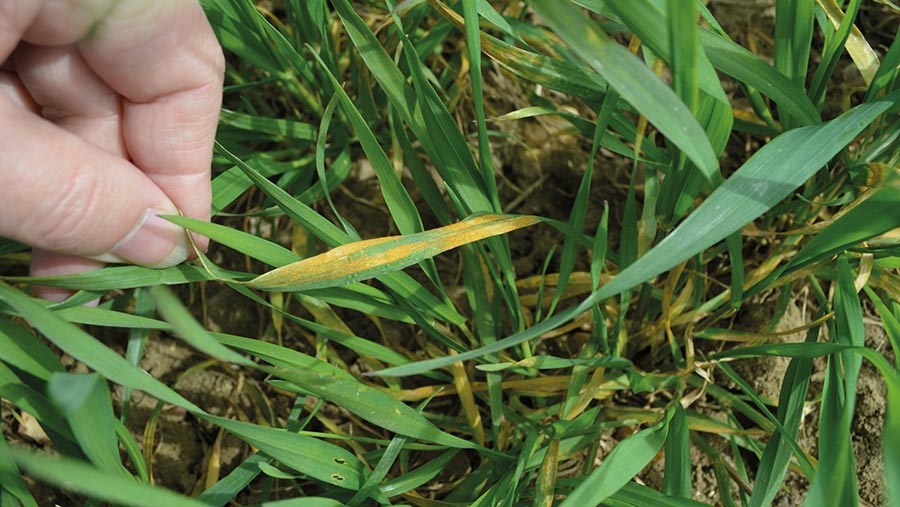 Many popular varieties have had their resistance ratings cut since harvest 2020 on the AHDB’s latest Recommended List, with Skyfall cut from 5 to 3, and Zyatt and Gleam from 7s to 5s, in a 1-9 scale where 1 is very susceptible and 9 shows good resistance.

There is now a cluster of varieties include these three, as well as Wolverine (5), Kerrin (4) and Kinetic (4) categorised as having very low resistance.

Therefore, an asterisk has been added to indicate varieties that have performed out of line with their main resistance ratings in some trials sites – these include popular varieties, such as Extase, Graham and Skyscaper, all with an 8* score.

The message from Mr Clark is to use the AHDB ratings as a guide, but to use local knowledge, as some varieties show yellow rust in some geographical areas but not in others.

“Clearly, there are other races of the disease at low frequency which are not evenly spread across the UK,” he says. To emphasis this, he  advised two growers to spray for yellow rust before Christmas.

Of the two azoles commonly used for control, epoxiconazole has the slight edge in efficacy, while many tebuconazole products can not be used before the end of tillering/start-of-stem extension or GS30.

The main time for fungicide control is the T0 timing at GS30, which normally occurs in late March/early April, although treatment is advised earlier if the disease is seen and if it is possible to travel on the field.

Beside the two azoles, strobilurin fungicides can also be used, but are generally seen as having a more protective, rather than curative, “known down” effect on the disease.

Other later sprays in a season, such as at T1 and T2, are likely to include SDHIs and azoles aimed mainly at septoria, and these are likely to give good control of yellow rust.

Independent agronomist Sean Sparling says he is seeing plenty of yellow rust in his area of central Lincolnshire, and he is likely to be advising the use of tebuconazole at T0 where the disease is a threat.

But where crops have sat in water over winter and are at a high risk of the disease, Mr Sparling, chairman of the Association of Independent Crop Consultants (AICC), may opt to use tebuconazole plus a strobilurin.

This addition of a strobilurin will help to dry up the yellow rust and also have a greening physiological effect on the crop to help it recover, he says.

Patrick Stephenson, fellow independent AICC agronomist based in North Yorkshire, says he can find yellow rust quite easily, even on the variety Jackal which has a resistance rating of 9*.

With many early drilled crops which have established well in his region, yellow rust could be a problem this season. He also advises the use of tebuconazole, but adds that growers should check the label as some brands offer more flexible spray timings.

“Yellow rust is going to be a bugbear going forward as we have a lot of big crops coming out of the winter,” he says.

Further north, Eric Anderson, senior agronomist at consultant Scottish Agronomy, says he saw a field of the variety Spotlight (6*) on the Fife coast with 30-40% of plants showing yellow rust before the snow arrived.

Many varieties popular in Scotland, such as Barrel, Elation, Sundance, Skyscraper, Jackal and Extase, have relatively high scores of between 7 and 9 for yellow rust, but still should be watched carefully.

He points out that Sundance and Extase are being grown in Scotland for their good septoria resistance, but they are not immune to yellow rust infection.

He suggest growers examine crops on a field-by-field basis, with early sown crops and those near the coast having the biggest risk of disease.

“I would advise growers to try and hang back until mid- to late March, with the best azoles offering good curative control,” he says.

These he suggests, are epoxiconazole, where available, or tebuconazole, but advises growers to look at the spray timing restrictions.