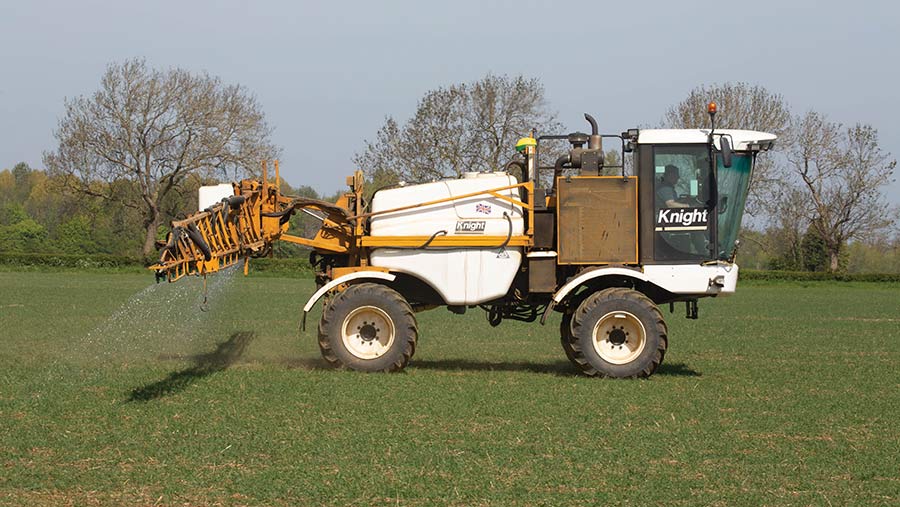 Nitrogen use is under the spotlight and pressure is mounting on farmers to enhance its efficiency and so lift yields, reduce fertiliser inputs, and alleviate environmental pollution risks.

On average, 40% of nitrogen fertiliser  applied to crops is left unused or lost to the environment, leaving farmers out of pocket and raising environmental concerns.

NFU crops board chairman Matthew Culley, who farms in north Hampshire, is one grower who is addressing these issues.

He is adopting a sustainable nutrition strategy on his farm, with the help of liquid fertiliser, solid digestate and a more selective approach to cropping choice.

Nitrogen use efficiency (NUE) determines the relationship between the total input of nitrogen to a crop compared with its nitrogen output.

This simply means the grain yield per unit of total available nitrogen, so improving this can help promote farm profitability and sustainability.

“Nitrogen is by far the biggest and one of the most expensive inputs in wheat production and carries a significantly large carbon footprint. As growers, it’s in our best interest to use it as efficiently as possible,” he tells Farmers Weekly.

“We need to look at how we input nitrogen, applying as little as possible to gain as much as possible, in terms of crop quality and yield,” adds Mr Culley. 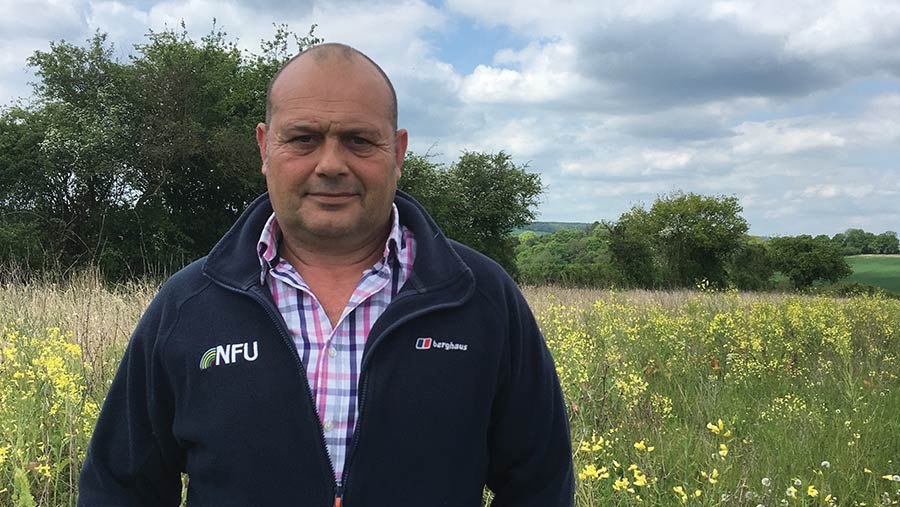 In a bid to address the accuracy of nitrogen applications, 15 years ago Mr Culley switched from a conventional disc spinner to liquid fertiliser across the 650ha of owned and contract-farmed land he manages.

He now uses the latest spraying technology to optimise applications with a 30m sprayer, equipped with single section auto shut-off and field mapping.

This has helped drive improvements in yield and nitrogen efficiency on his farm, near Andover, with wheat crop applications down by 30kg/ha of nitrogen to 210kg/ha.

“Liquid fertiliser was applied to a 297ha area, yet the actual crop area sprayed was 16ha less, which would otherwise have been needlessly sprayed. This saved 7,500 litres of liquid N – the equivalent of 2,500kg of N,” he adds.

Using the granular form, Mr Culley consistently found yields tailed off on the headlands, but now with the use of liquid fertiliser he no longer experiences this drop-off.

Furthermore, the individual nozzle control is not solely used for fertiliser, but also herbicide and fungicide applications, which brings additional benefits.

Consequently, the farm’s sprayer workload has significantly risen. This prompted Mr Culley to purchase a 6,000-litre bowser with return flow pump to haul inputs to the field, enabling the sprayer to run at its optimum capacity.

The use of liquid fertiliser also allows for a flexible addition of urease inhibitors directly to the tank during warm conditions to improve nitrogen uptake.

There are two types of inhibitors available. The first is a soil acting inhibitor which locks in nitrogen applied to the soil. Mr Culley is trialing this on farm, but admits that it is more costly.

The product allows growers to apply all fertiliser in a single pass during February. As conditions warm up, nutrition is slowly released to the plant.

The second type is an enzyme inhibitor, which slows the conversion rate of ammonium nitrate to reduce the amount of urea volatilised to the atmosphere.

Mr Culley often uses this significantly cheaper inhibitor in the second or third fertiliser dose for his wheat crops. This prevents volatilisation for five to six days from application date, making more nitrogen available to the plant. 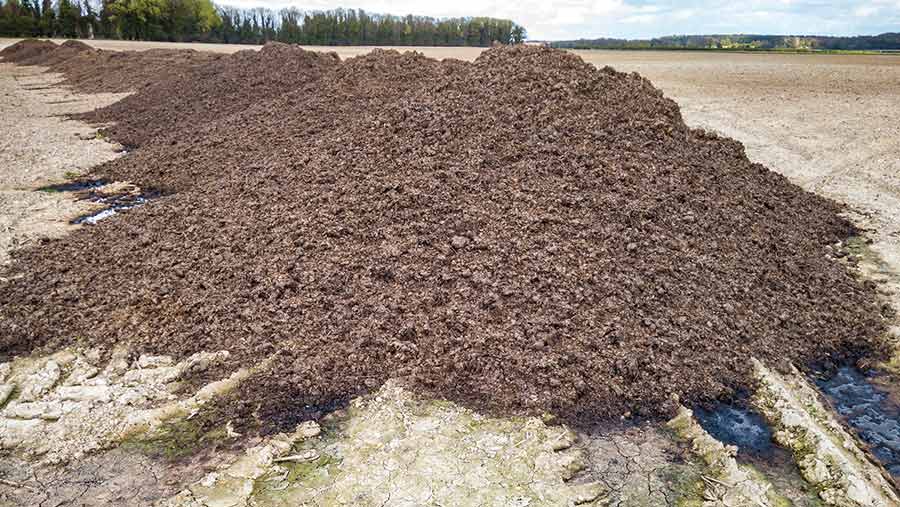 Over the past five years, applications of solid digestate from a local anaerobic digestion (AD) plant have greatly improved the nutrient holding capacity of his soils and reduced reliance on artificial fertiliser.

Mr Culley grows forage maize, rye and oats to supply the AD plant, which makes up 50% of his total cropping area. These crops act as the farm’s main break crops now oilseed rape is no longer grown.

In addition to this, he has teamed up with a local dairy farm, growing forage crops and grass in return for slurry.

“Although we are losing some cropping area to grass, we need to look at the whole picture and do what is best for our soils,” he says.

A total of 60-65t of solid digestate is applied in front of forage crops (the equivalent of 250kg/ha of N).

However, only 4% of this nitrogen was found to be available to plants, which left Mr Culley wondering if the application was worthwhile.

Despite this, he decided to take the long-term view that digestate will benefit soil structure and increase organic matter levels, so nutrients become available in the soil as conditions warm up, reducing nitrogen requirements

“One land block which received digestate applications has not required P and K or lime for three years.

The digestate neutralises the acidic clay cap in some of our soils and has significantly reduced nitrogen requirements and improved soil health,” he says.

Considering a crop’s nitrogen requirement and overall gross margin is a key factor when it comes to crop selection, helping Mr Culley to improve NUE at the plant level.

Winter wheat crops receive 210kg/ha of nitrogen, with yields fluctuating from 7-8t/ha in some fields and 11-12t/ha in others, across a mix of chalk loam, clay cap and gravel soils.

Yet when growing oats and rye forage crops, a maximum of 170kg/ha of nitrogen is used to achieve the same gross margin as wheat on his lower yielding sites, which saves 60kg/ha of nitrogen and improves output efficiencies.

“Forage crops are great scavengers for nutrients and therefore require less inputs, yet we still generate the same income. To me, this is improving NUE on a crop by crop basis,” he says.

Winter wheat – Three splits each of 70kg/ha of nitrogen. Urease inhibitors used in tank mix for applications two and three.

Spring barley – 130kg/ha of nitrogen applied in two 65kg/ha splits. The first in front of the drill and the second when tramlines become visible and a couple of tillers have developed.

Maize – This season, Matthew Culley is hoping to improve nitrogen efficiency, reduce scorching risk at the three-to-four true leaf stage and reduce weed burdens by applying 50-75% of the total nitrogen down the spout at drilling. Crops will be assessed throughout development, with a tissue test carried out at the 12-true leaf stage to see whether a foliar nitrogen spray is required.