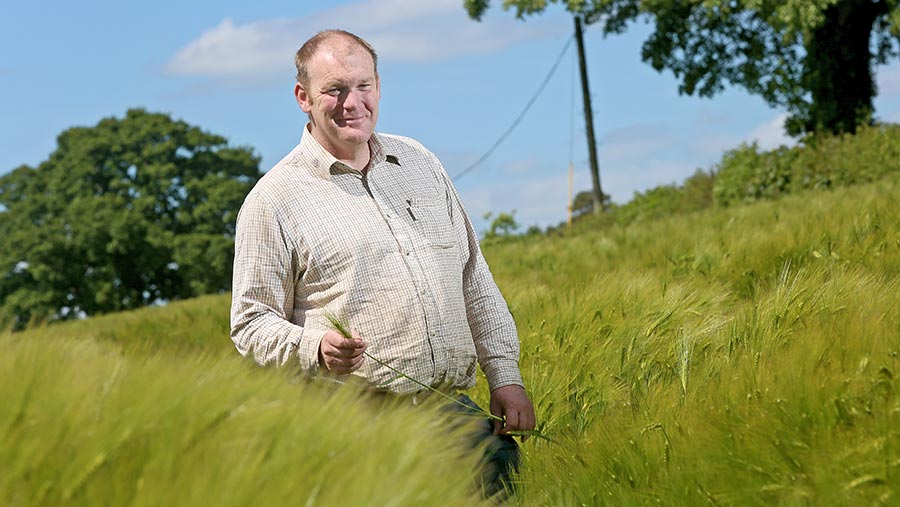 A former AHDB monitor farmer and member of its associated business group, Mr Wood has used benchmarking to evaluate the current position of Clay Farms with that of similar farm businesses.

“It was the easiest way to do the comparison,” he recalls. “It immediately showed me that our fixed costs were higher than they should be.”

See also: How sharing farm labour and kit can save on arable costs

Having looked at other businesses and delved down into the detail a bit deeper, it proved to be power and labour that were the Achilles heel of the farm.

Detailed costings information on the benefits of any alterations has allowed Mr Wood to review these areas, justifying the purchase of new machinery and existing staff levels.

Mr Wood had some decisions to make about the best replacement policy for big machinery items.

Having had very good use from it, the farm’s eight-year old trailed Berthoud sprayer had developed a few reliability problems, and with the arable area expanding, he was considering whether it should be changed.

However, the Horsch sprayer that he had identified as the best option for the farm had a hefty price tag of £70,000.

“That level of expenditure made me think twice,” he says. “With all the current uncertainty, it is increasingly difficult to justify new machinery prices.”

His costings and calculations showed that the existing Berthoud sprayer was costing the business £5.27/ha, while upgrading to the Horsch sprayer would be £5.62/ha.

“Changing the sprayer would increase our costs by just 14p/acre [35p/ha). With the other benefits that it could bring, it was easy to justify the purchase.”

Benchmarking has also revealed that labour costs, in particular, seemed to be out of line with those of other farms.

“At first glance, it appeared as though we were overstaffed,” recalls Mr Wood. “But as this is an estate farm, our wages bill of over £170,000 covers other functions and isn’t all attributable to farm work.”

More investigation followed, so that the labour requirement of the shoot, forestry and property could be allocated separately to the farming activity and a more relevant comparison made with other farming businesses.

“It turned out that farming only accounted for 49% of the total wages bill. It wasn’t as excessive as it first appeared.”

Costs aren’t the only reason for making changes, he accepts, as there can be other considerations and effects on other parts of the business.

“I know, for example, that the barley we grow was sold for less than its cost of production last year. However, it is a good early entry for oilseed rape, so we have to get the oilseed rape to perform better and cover for some of the barley cost.”

He points out that being in the top 25% is the key to remaining profitable. “If you know your costs, you can make any necessary decisions armed with the facts and with full understanding of the implications.”