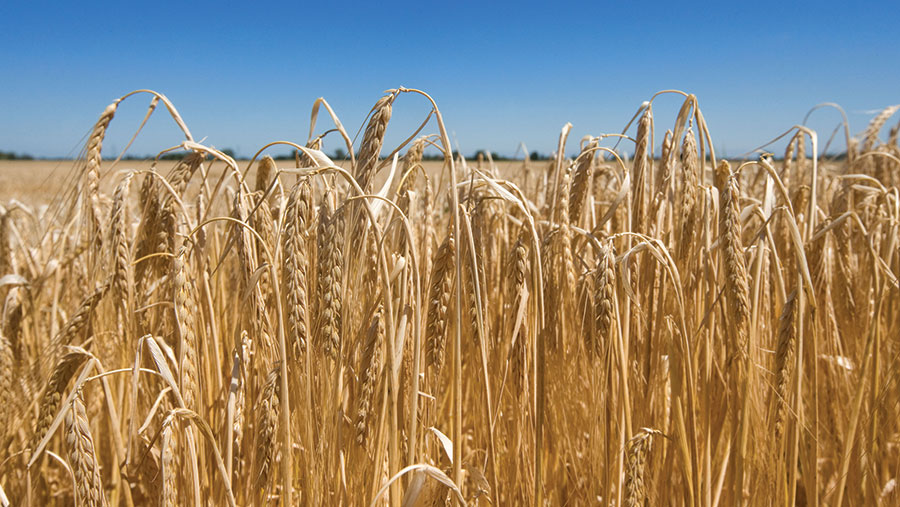 Getting a group of like-minded growers together to share information to increase crop performance saw Aberdeenshire grower Peter Chapman’s efforts recognised with a YEN Innovator of the Year Award.

The new Adas award for spring barley was driven by Mr Chapman, keen to get spring barley recognised for its place on Scottish farms.

He is also hoping that a YEN award for the quality element of the crop will be introduced, just as it has with milling wheat.

We look at how he achieved a spring barley yield that was 1.1-1.6t/ha above his normal yield expectation on his farm.

See also: How to maximise spring barley yields after a wet winter

Mr Chapman grows 140ha of spring barley for feed, with two years of the crop being part of a fixed rotation that includes winter barley, winter oilseed rape and winter wheat.

His current variety choices are Planet and Diablo – not for their end-market suitability for brewing and distilling, but for their very high yields.

Drilling takes place some time in the three-week window after 20 March but before 10 April, when conditions are right, with the end of March being his preference.

Mr Chapman’s use of farmyard manure or compost on every hectare drilled means that his spring barley is unlikely to achieve the lower grain nitrogen required for distilling – even if he pushes the crop as much as he can to dilute the nitrogen content.

A yield of 9.1t/ha from his 2019 YEN entry was well above the 7.5-8.0t/ha that he expects, which he credits to insights he has been able to glean from the Adas team behind YEN.

“We had a talk from Sarah Kendall, who told us that 170kg/ha of nitrogen was the optimum amount. That was higher than I had been applying, so I changed my nitrogen management accordingly on the YEN entry,” he adds.

While a small amount of nitrogen is applied at drilling, the rest is usually applied as soon as he can see the tramlines. Given the greater total used in 2019, he did split the second application between 25 April and 11 May.

The other significant change to the crop’s agronomy was made following tissue test results.

“We always knew we had an issue with copper, but we didn’t realise just how much. There were no symptoms showing in spring barley, but levels were too low,” he says.

Blind grains in his winter wheat had always been blamed on the variety, rather than an underlying deficiency, he admits.

Manganese was a routine application – that’s now been joined by copper, zinc and boron. “We’ve learned a great deal about trace elements and when they’re required,” he says.

This year’s YEN entry of Diablo was drilled on 30 March at 325 seeds/sq m. As well as changing the nitrogen and trace element regimes, Mr Chapman gave it a helping hand with the Delta foliar feed products used by Lincolnshire grower Tim Lamyman.

He admits that he spent half as much again on it as he did on the rest of his spring barley.

“I threw the kitchen sink at it to see what could be achieved. It’s a very short growing season up here, so timeliness is key,” he says.

One sulfonylurea herbicide was used, two SDHI fungicides and two plant growth regulator (PGR) treatments – with the extra growth regulation treatment being a departure from his usual practice in spring barley.

“The crop was very thick and some fields were a bit scary. So I used two PGRs and it stayed upright until after it had been sprayed off,” he says.

Looking ahead to 2020, he predicts a bigger problem with the control of ramularia, as he won’t be able to rely on chlorothalonil following an EU ban on the product.

“We don’t do that spray before the end of June up here and the use-up period on chlorothalonil is end of May. We’ve always taken a prevention-is-better-than-cure approach, which will remain, but we can’t rely on chlorothalonil to perform that function now,” he says.

Mr Chapman’s involvement in YEN came through agronomy group Hutchinsons and the AHDB Monitor Farm network, and now means there is an 18-member-strong group in northern Scotland, consisting of growers and key supporters.

Thanks to his enthusiasm for the initiative, the 12 growers in the group are regularly among the national and regional competition winners announced each year, with all making great strides and learning from each other.

To be part of the group, members must be committed to YEN and enter the competition for two consecutive years, as well as being prepared to share their information.

“It isn’t a closed shop. We are all in this together and have a common aim of wanting to find out how we can raise productivity on our individual farms. A two-way flow of information is essential for this,” says Mr Chapman.