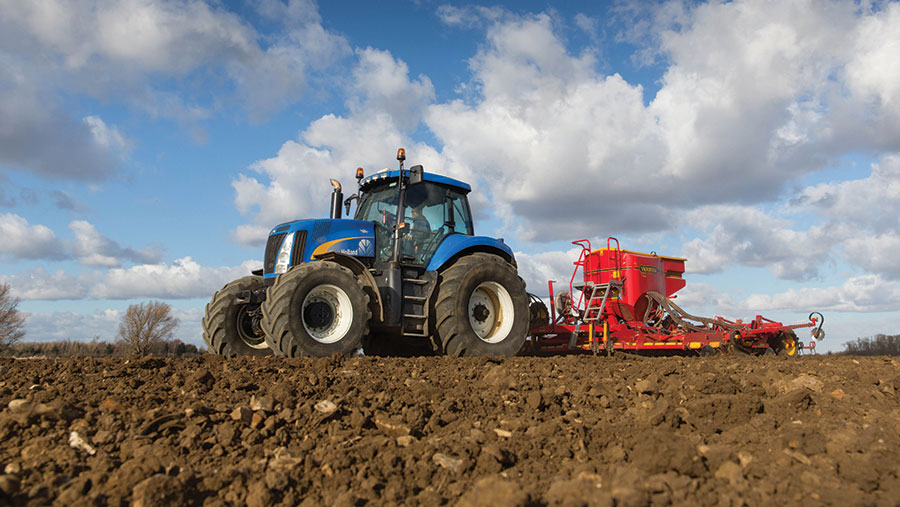 Spring barley growers on heavy land can benefit from additional yields of over 2t/ha by drilling at the mid-end of March, especially this season, when soils will take a long time to dry out after the winter rain deluge.

The key for growers will be to wait until soil conditions are right for drilling this spring, while early plant nutrition and the use of plant growth regulators (PGRs) could also be vital for crop establishment.

Colin Lloyd, head of agronomy at advisory group Agrii, explains that spring barley is a very flexible crop that can be drilled between February and April, but this is not a season to rush into early sowing.

“Growers will be keen to get crops in the ground, but it’s vital to optimise drilling conditions.

“There is time to hold on and wait, otherwise it could cost you,” says Mr Lloyd.

With an expected large rise in the spring barley area, grain prices could come under pressure, but with patience, sensible budgeting and the right timing of inputs, spring barley can be a very profitable crop.

Early doses of nitrogen, phosphate and potash as well as PGR applications will be particularly useful this season to get root systems established and crops growing strongly.

Trials carried out by the agronomy firm have shown yield penalties of 1.9t/ha when spring barley was sown too early, as an early-drilled crop yielded 6.8t/ha, while a late-drilled one gave 8.7t/ha.

In the trial, the spring barley variety Explorer was drilled in a 1ha plot on 20 February and 21 March 2019, with all inputs standard across the two plots.

Mr Lloyd concludes that delayed drilling can result in better establishment and reduced weed pressure as crops will get away quickly, producing more consistent yields and a gross margin £230/ha greater than earlier-drilled crops.

The optimum seed rate for spring barley is about 350 seeds/sq m.

The exception to this rule is the variety Planet, where a seed rate of 400 seeds/sq m has consistently yielded better in the past few years in group trials.

Cultivations ahead of drilling are very important as soil conditions at drilling have the greatest impact on final yields, with early plantings in wet soils leading to poor establishment and damage to soils.

Justin Burton, the group’s senior trials officer, advises growers to work soils gently from the top down, to create a fine tilth this season.

“Aim to move as little ground as possible to avoid bringing up wet soil and grassweeds from deeper down the soil profile,” he says.

Mr Burton advises to try to avoid using a plough or deep cultivator and going too early as this can create a wet, cloddy seed-bed, which creates problems deeper in the soil profile that will take time to rectify.

“We want to work as shallow as possible, targeting the top few centimetres of the soil to enable a successful early germination,” he adds.

Tine drills are often preferable over disc drills, as tines will effectively aerate the soil and reduce seed-bed smearing, despite moving more soil than other drills.

“It’s vital to avoid soil smearing as this will trap seeds into a vice and prevent root systems from establishing,” says Mr Lloyd.

The intense rainfall during the autumn and winter will have caused leaching of valuable nitrogen into the lower soil profile, reducing soil nitrogen indices, particularly in the top 30cm of soil.

Therefore, early applications of nitrogen are crucial for the crop to get away quickly.

Growers should aim to apply 150kg/ha of nitrogen to achieve the optimal target yield. An early application of 60kg/ha should be applied to the seed-bed at drilling, with the rest applied by growth stage 13-21 (three leaves emerged to main stem and one tiller emerged stage).

“Early nitrogen is essential to get the crop going, and waiting until growth stage 13 (three leaves emerged) for the first application can lose 1t/ha,” warns Mr Burton.

Poor rooting conditions this season means the inclusion of sufficient phosphate, potash and sulphur into the seed-bed will be key.

The immobile soil properties of phosphate means that small root systems will particularly benefit from fresh supplies on this nutrient.

Furthermore, soils may be particularly low in potash this spring if straw was removed from fields last season instead of being incorporated back into the soil.

Heavy rainfall will have also caused leaching of potash deeper into the soil profile and out of the rooting zone.

The use of specialist manganese and zinc seed treatments can enhance yields, while many growers also apply manganese throughout the season.

“Spring barley loves manganese so it’s important to supply it throughout the season and remember that the use of seed treatments doesn’t remove the need for foliar applications,” explains Mr Burton.

Mr Burton says that a two-spray T1 and T2 fungicide programme should be enough to control diseases, with an average programme costing £58/ha.

Assuming a barley grain price for November 2020 at £127/t, this means a 0.5t/ha yield response is needed to cover fungicide costs.

“Average fungicide responses in 2019 trials were 1.5 t/ha, which is more than enough response to justify the programme,” he adds.

Early applications will increase rooting and tiller survival, and he notes that PGRs applied at or after growth stage 30 or the end of tillering will only decrease straw length.