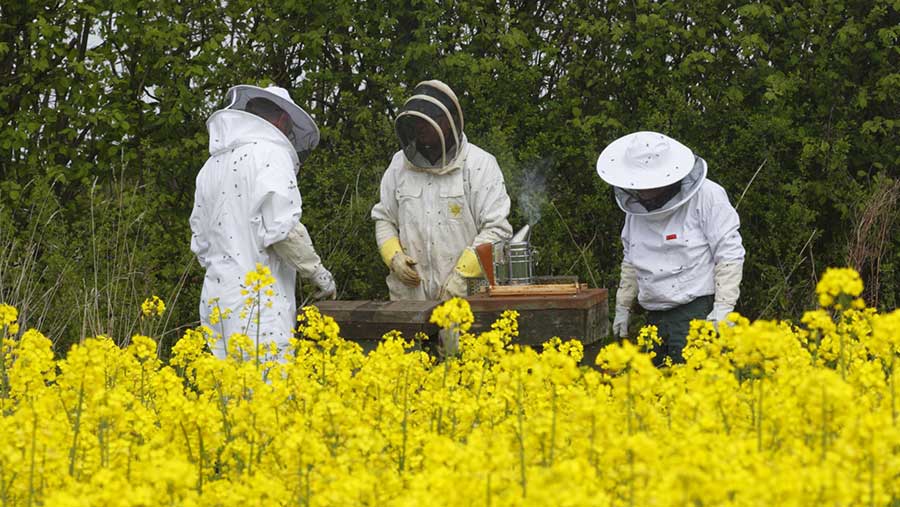 The results of a long-awaited, large-scale European field trial which concluded neonicotinoid pesticides are harmful to bees are being widely debated.

The study, conducted by the Centre for Ecology & Hydrology (CEH) and published in the journal Science, found neonics caused reduced capacity for bees to establish new populations in the following year, at least in the UK and Hungary.

By contrast, hives in Germany, were larger, and bees had access to a wider range of wildflowers to feed on.

Scientists say this may explain why in this country alone, there was no evidence of a negative effect of neonicotinoids on honeybees.

The results have been met with a mixed response; environmentalists say it is the clearest evidence yet that neonics, the use of which on flowering crops is subject to an EU moratorium, should be banned for good.

However, farming organisations say no firm conclusions can be deduced from these results because of complicated interactions between bee species, pesticides and different field conditions.

They have called for more research and insisted extending the neonics ban to non-flowering crops would be unjustified and massively impact food production.

Here is how farming and non-farming organisations and leaders reacted to the study:

“While this CEH study provides more useful information, we still don’t have that definitive evidence for the impact of neonicotinoids, and yet farmers and food production are hindered by restrictions on these products.”
NFU vice-president Guy Smith

“The results are very mixed. There are 42 comparisons of parameters measured with and without the seed treatments and of these 33 are not significant and therefore we can only conclude that the treatments had no effect.”
Lin Field, insect molecular biologist and head of biointeractions and crop protection at Rothamsted

“This should now be the final, fatal blow to neonicotinoids. With neonics widely polluting farms, and with UK farmers still treating most wheat, an outright ban is needed immediately. But a ban isn’t enough – neonics never should have been cleared for use.”
Louise Payton, Soil Association policy officer

Friends of the Earth (FoE)

“We can successfully grow crops without neonicotinoids, and without resorting to more pesticides. The UK government must now do more to help farmers grow the crops we need without harming Britain’s bees.”
FoE nature campaigner Sandra Bell

“The neonicotinoid imidacloprid was frequently detected in bee nests but was not used on the farms in the year of the study. This is in accordance with previous studies showing neonicotinoids are persistent in soils and frequently contaminate wildflowers. In the light of this new study, continuing to claim that use of neonicotinoids in farming does not harm bees is no longer a tenable position.”
David Goulson, professor of biology at the University of Sussex

“The one line simplistic summary conclusion published does not reflect the data presented in this paper, which clearly show no consistent effect of neonics across the three countries studied, with both positive beneficial effects and negative effects reported for both honeybees and bumblebees, in Germany and Hungary/UK respectively.”
Peter Campbell, senior environmental risk assessor at Syngenta

“We do not share the CEH’s interpretation that adverse effects of the seed treatments can be concluded from this study, and remain confident that neonicotinoids are safe when used and applied responsibly.”
Richard Schmuck, director of environmental safety at Crop Science, a division of Bayer

“The fact that bees fared better in Germany than in the UK and Hungary suggests that neonicotinoids are but one of many factors which impact on bee health.”
CPA chief executive officer Sarah Mukherjee