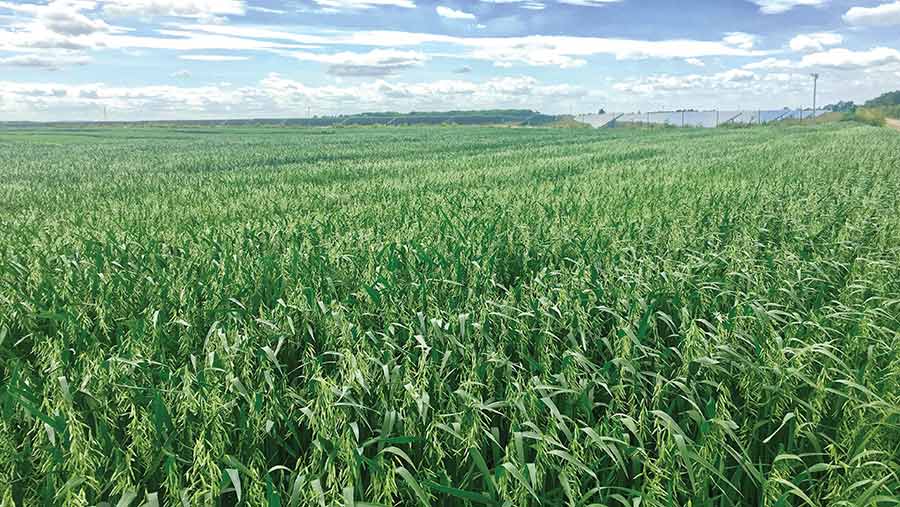 Farmers could be missing out on additional returns of £100/ha when growing spring oats.

One expert believes this is due to farmers treating the white straw break crop like spring barley, despite oats having a substantially different growth cycle and development characteristics.

Skye Van Heyzen, innovation crop product manager at agronomy firm Agrii, explains how careful consideration and integration of an array of agronomic practices from soil to plant can help get the most from the crop.

“Oats should no longer be considered as a ‘Cinderella’ crop,” he says. “Gone are the days where growers used to slap some oats in the ground and hope for the best.”

Instead, Mr Van Heyzen explains how spring oats require a “pop-and-run” start to life to get them on the front foot, so growers can capitalise on the many benefits the crop has to offer.

This relies heavily on a tailored agronomic package to maximise crop output, which starts with soil analysis and dealing with potential compaction issues before drilling.

Trials have shown improvements in agronomy management could be worth an extra £100/ha gross margin for milling oats and more than £120/ha for naked oats, highlighting the importance of growers understanding soil and crop needs.

The benefits of spring oats

“There has never been a more important time to investigate and analyse soils – particularly with the drive towards minimum and zero tillage – by getting out there and digging some holes,” he says.

As oats have a deep, fibrous rooting system, with excellent nutrient-scavenging abilities they are able to clean up and reset soils, with the bonus of common take-all immunity. However, compaction can restrict rooting and lead to the development of horizontal roots, which limits essential water and nutrient uptake, constraining yield potential.

He admits that there is no silver bullet to improving soils, but assessing soils is a great place to begin.

“This can help identify what tool can be used to help soil structure, whether this is using a subsoiler to break up compaction pans, a plough to reset soils or finding the right cover crop species to enhance structure and, ultimately, improve gross margin.”

Nutrition is another essential component in encouraging the “pop-and-run” start and maximising output, particularly input timings.

Mr Van Heyzen recommends using a broad-spectrum soil analysis to tailor supply and timings of both macro- and micronutrition.

A balanced programme where nitrogen and phosphorus is applied early on in the crop’s growth cycle, followed by potassium and magnesium later, is key.

Oats use a maximum nitrogen total of 150kg/ha, which includes N that is already available in the soil. This leaves between 90-110kg/ha N required for application.

For crops drilled from late February to March, about 50% of N can be applied at sowing time, with the remainder applied at growth stage (GS) 31-32.

“It is difficult to say at exactly which growth stage nutrition should be applied, as this must be balanced with drill date and weather, since moisture is key for effective use,” he says.

Nitrogen can be effectively applied during GS33-34, especially if the weather is more appropriate. However, Mr Van Heyzen warns that N applications from GS35 onwards can lead to costly yield implications and lodged crops as the straw is fed instead of the all-important grain at this stage.

Seed rates of 325 seeds/sq m are suggested, but this varies considerably depending on soil type, drill date and weather.

“If you are drilling later into heavy, cold soils, this rate would not be enough,” he warns.

Oats truly enjoy a balanced diet, he says, which is why a range of trace elements and seed treatments can prove beneficial to crop growth.

“Spring oats are often susceptible to manganese deficiencies, while they also require zinc for healthy root systems. Growers should take particular note of soil phosphate indices, as too high P levels can lock up zinc within the soil profile,” he advises.

Such trace elements and seed treatments can be used as an insurance policy in times of difficult years where adverse conditions can affect crop growth. What’s more, spring oats are a relatively plastic crop – they respond well to treatments, with the ability to rapidly bounce back after input applications, compared with other cereals.

Due to the crop’s responsive nature and more sensitive leaf area compared with that of wheat or barley, PGRs require careful thought, with a “softer” application approach, which makes splitting doses preferable.

“Oats are very responsive to growth regulators, so it is key to balance and manage inputs according to genetics, crop condition, weather and drill dates.

“Growers need to understand their crop in order to tailor growth regulator applications. The last thing we want to see is lodged crops,” he warns.

Although, spring oats have been shown to be the most competitive spring cereal option, good seed-beds are critical.

When it comes to weed control, growers need as clean a start as possible to keep on top of broad-leaved weeds.

As no meaningful graminicide options are available, a standard one-hit broad-leaved herbicide spray is capable of doing the job.

Likewise to weeds, a standard T1 and T2 disease control application is sufficient to keep on top of mildew and crown rust and ensure leaves stay green.

“Too often, leaves begin to develop disease symptoms where it is too late to control disease spread, particularly crown rust. There is a huge benefit to keeping leaves green in absence of disease,” he says.

Just like all crops, getting the timing of harvest right is critical, but finding the optimal time to commence cutting oats can prove even more of a challenge.

This is because oats mature from the panicle down, which gives them the tendency to have more greener straw, compared with that of wheat and barley.

Waiting too long for the straw to mature can cause the panicles to become brittle and negatively affect grain quality and marketability, with a high likelihood of grain losses.

“A little green in the straw isn’t too much of an issue, as oats are naturally greener than other cereals. However, too much green can cause the crop to be ‘chewy’, which bungs up the combine,” explains Mr Van Heyzen

Prior crop management relating to a nutrition timings is helpful to avoid this, he concludes.