Winter wheat growers could cut their fungicide spend this spring if they are growing varieties with good disease resistance that were drilled in late autumn.

The dry winter has held back the spread of diseases, such as septoria and yellow rust, and this may allow growers to omit some expensive fungicide types or even miss out some sprays altogether.

Ryan Hudson, agronomist with independent farming group Velcourt, says if varieties with good disease resistance were drilled in late October and in low rainfall areas it should be achievable to keep fungicide spend under £100/ha.

The group farms 55,000ha of land under a variety of management arrangements stretching from the Moray Firth in the north of Scotland to Devon in the South West, with a focus on arable and dairy farming.

Velcourt’s advisory service provides independent agronomy on 29,000ha of additional land through its agronomists and some of its farm managers.

Every year the company collates its cost of production statistics from across its farming operations and as far back as the records go it has never spent more than £100/ha as a national average for fungicides on first wheats.

Last year, the average fungicide spend on the group’s first wheats was £96/ha (giving an average yield of 9.2t/ha), but the range was nearly £60/ha between the lowest spend and the highest.

This range was primarily due to geography, with the higher spends tending to be in south-west England with its higher rainfall and therefore higher disease pressure. 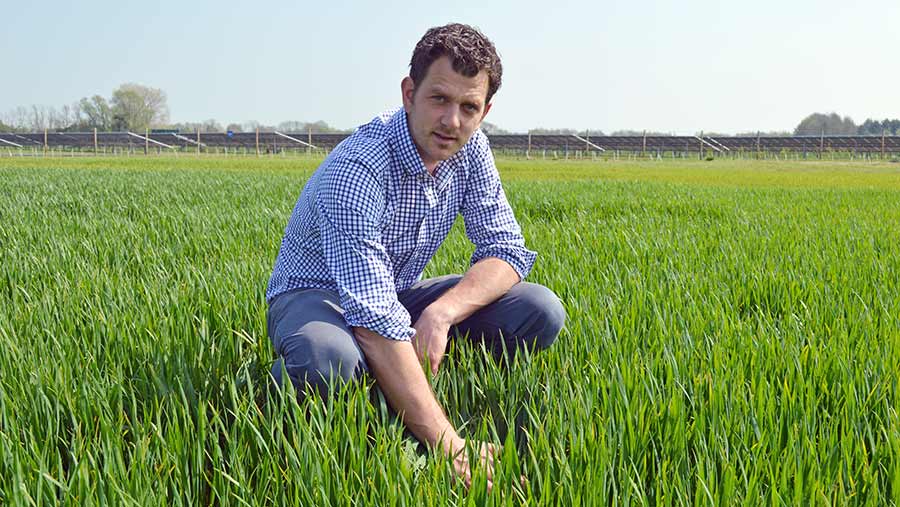 “A spend of under £100/ha should be achievable through careful management, but this begins with variety choice and drilling date,” Mr Hudson tells Farmers Weekly.

“If you drill a susceptible variety in September then expect to spend more on fungicides than a farm growing a highly resistance variety planted in the second half of October,” he adds.

Although the dry winter has curtailed disease development, there is still disease to be found, and with the declining efficacy of major fungicide types, such as azoles and SDHIs to septoria, growers are not able to fully eradicate disease.

Therefore, they will have to assess the level of disease against variety resistance and forecast weather going forward into the season.

Mr Hudson says following the move towards later drilling and more resistant wheat varieties, there are opportunities to trim fungicide costs and this should start with considering the need for an early T0 spray, often applied in late March.

In many situations, the cost of T0 applications has steadily increased but the yield response to a T0 fungicide is still minimal.

In high rainfall areas and on more susceptible varieties, a T0 application is a management tool to help take some pressure off T1 sprays, but the T0 spray should not be a matter of course for every crop of wheat.

“If you are growing a variety like Graham in East Anglia and drilling in late October then there is a question mark over the need for a T0 spray,” he adds.

The key is the weather, so if conditions are dry to the end of March and there is a forecast of generally good weather then a T0 spray may not be necessary.

Looking ahead to the coming fungicide spring season, Mr Hudson sees three drivers for decision-making, then one unknown. The three drivers are:

The one unknown, of course, is the weather and here spraying capacity is critical as growers need to be able to get around their wheat area in less than five days with their sprayers and preferable closer to two or three days.

The starting point with an initial T0 is often a multisite protectant fungicide, such as chlorothalonil, which has been in use since 1964 with no known disease resistance being detected.

Therefore, chlorothalonil is often used as a base product for a T0 to protect leaf four and prevent disease moving up to newer leaves when they emerge. Often systemic fungicides, such as azoles and strobilurins, are added.

Mr Hudson points out that there is little significant yield response from a T0 fungicide, and very little growers can do to eradicate septoria at this time from older leaves.

However, if growers do decide to apply a T0 fungicide then timing is crucial to give protection to leaf four to prevent disease moving from the lower infected older leaves up on to the newer emerging leaves.

Varieties with good resistance to septoria, like Graham, Siskin and Dunston, may not need a T0 depending on drilling date and weather, while septoria-susceptible ones like Barrel, Basset, Santiago and Diego are most likely to require a T0 protective spray.

Mr Hudson’s policy on rust diseases is that if signs of infection are seen in a crop then a fast-acting curative azole, such as tebuconazole or cyproconazole,should be used.

Whereas if no rust is seen and susceptible varieties are being grown then he advises using a strobilurin, as this will give better protection and be longer acting than an azole.

The farming group’s in-house research and development team look at SDHI and azole fungicide options each season on sites across the country.

Results have shown no significant difference between a robust azole and an SDHI fungicide at the T1 timing, usually applied in late April, within a fungicide programme including multisites and partner products.

The company’s default position would not be to apply two SDHI fungicides if growers can help it, although they have to remain flexible in their approach to react to the season, as if there is a prolonged period of rainfall and disease pressure increases then growers will require stronger fungicide options.

In many cases, SDHI chemistry is now the default option at T1 and then at T2, but growers should ask whether the crop requires two SDHI fungicides.

Mr Hudson questions whether growers are over-insuring their crops and increasing the risk of accelerated resistance, as the Fungicide Resistance Action Committee (FRAC) guidelines suggest aiming for one application of SDHI chemistry.

The focus on breeding wheat varieties with improved resistance comes at a time when two of the main systemic fungicides in a growers’ armoury – azoles and SDHIs – are losing their efficacy against septoria.

“The focus has to be on genetic disease resistance as we can no longer rely just on the chemical can. We are seeing further shifts in sensitivity to azoles but also SDHI chemistry and although there are new fungicide options coming, we must protect all options available,” he says.

“We are looking to varieties where the untreated yield is as close to the treated as possible to reduce the risk from disease. Extase and Firefly are two exciting new varieties we are looking at this year,” Mr Hudson adds.

Both varieties were added to the most recent Recommended List, and in 2018 AHDB trials the fungicide-treated yield response from Extase was 0.74t/ha compared with the disease-susceptible Diego at 3.09t/ha.

“This is only one year, but this is the level of yield we are protecting with a variety with better genetic resistance,” he says.