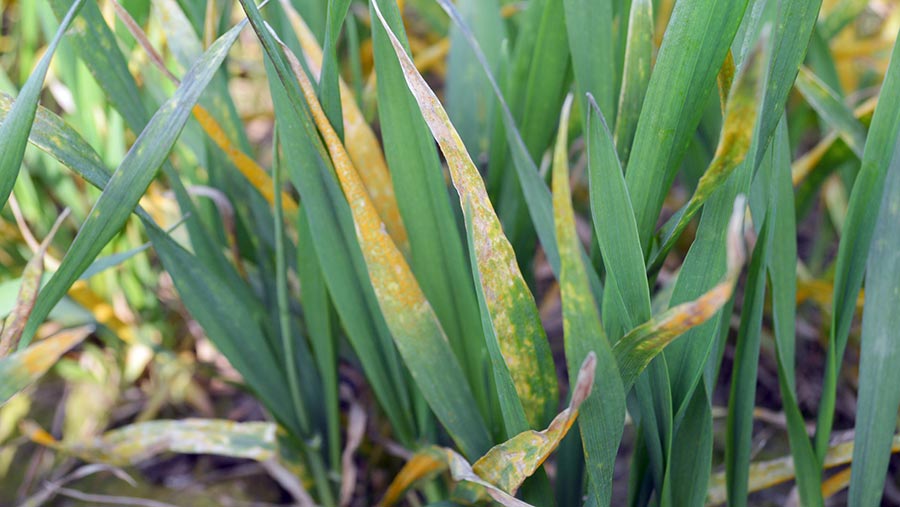 Recent spring-like weather is likely to mean that winter wheat fungicides sprays may be needed earlier than usual this season. This could save growers money on later applications.

Agronomy experts says it is important to make the most of early T0 fungicide sprays to avoid incurring high T1 fungicide costs later after disease has become established.

Christine Lilly, technical manager at agronomy group Frontier, says with signs of disease creeping into wheat crops, T0 sprays are going to be critical this spring.

Her group’s trials in Herefordshire show high levels of mildew in wheat varieties Kerrin and Dunston, while a Yorkshire site is showing high levels of yellow rust in Shabras.

See also: Septoria springs up in some Dorset wheat crops

Although levels of yellow rust are low at a Lincolnshire site, Mrs Lilly says this is due to the late October drilling date, and she urges growers to be in their fields checking the crops, particularly after the warm weather in February.

The necessity for a T0 spray varies depending on both drilling date and variety, and is often a subject open to debate. However, she believes this season there are very few cases where a T0 is not necessary.

“Often later-drilled crops will still suffer from mildew, and if a variety is susceptible to yellow rust, it will get a T0, no matter when it was drilled,” she says.

“If there is poor establishment, you would maybe not bother with a T0, but the crops look so well and the nitrogen is on early, so they need the T0 to support them,” she adds.

Mrs Lilly also highlights the cost-saving benefits of a T0, as a well-timed early spray could potentially save costs on later T1 treatments.

“Of all spray applications, the T0 has the lowest cost of all. If it is effective, it is certainly worth doing and even a modest yield increase would make it worthwhile. Often a T0 may allow for a reduction of T1 rates as the T0 has already dampened the disease,” she says.

She recommends an azole-chlorothalonil mix as the most broad-spectrum for eradicating disease. Alternatively, use a chlorothalonil-strobilurin mix if there is no yellow rust visible, but the variety grown does not have strong resistance to the disease.

The use of multisite products such as chlorothalonil, as well as mixing different modes of action, is recommended to delay resistance to fungicides building up.

Independent agronomist Tom Clark from Assured Agronomy also stresses the importance of a T0 application for reducing disease pressure and therefore costs when applying a T1.

“With the current chemistry there is little curative activity and therefore once disease is in the crop, it is very hard to get rid of it. It is likely that you are going through with a plant growth regulator anyway at this time and we cannot afford to let disease into the crop,” he says.

“Looking at disease ratings for your variety is very important – a variety with a good yellow rust and septoria score could warrant a reduced spend at T0, but a susceptible variety may need more spending on it,” he says.

The recommended timing for T0 sprays is growth stage 30, and therefore growers should be monitoring rainfall and temperatures to prepare for this application, which generally occurs in the latter half of March.