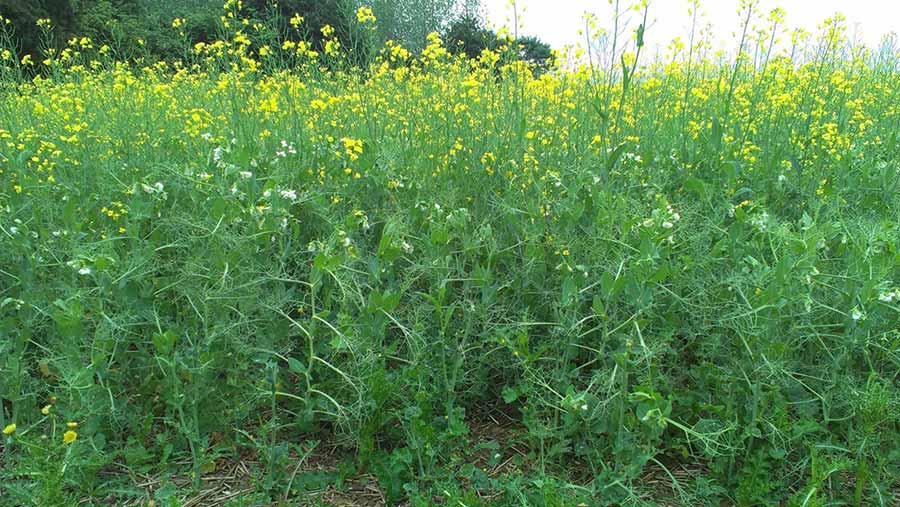 Growing two crops together, known as intercropping, can increase yields by suppressing weeds and reducing crop susceptibility to pest and disease attacks.

On-farm research, run by the Innovative Farmers Network and led by two farmers, has investigated the benefits of intercropping beans with wheat, oats with linseed, and peas with oilseed rape.

Kate Pressland, Innovative Farmers programme manager, highlights that while trial results have been varied, there have been some positive findings for the farmers, with benefits seen in weed suppression, reduced lodging and improved soil health.

One of those taking part is organic beef and arable farmer James Hares, of Roundhill Farm in Wiltshire. He investigated the benefits of intercropping wheat with beans, reporting a staggering 75% decrease in weed biomass.

Levels of wild oats and thistles in fields on Mr Hares’ 130ha farm near Swindon had begun to cause large yield losses, particularly in bean crops where weeds were challenging to control.

As the farm is organic, weed suppression is key, which encouraged Mr Hares and his father Adrian to look for an alternative method of weed control on their heavy clay soils, while also improving the quality of their bean crop, which is used as animal feed on the 100-head TB finishing unit.

Mr Hares says: “We had a disastrous bean crop the year prior to trialling intercropping, only harvesting a third of the field that we planted. We knew something had to be done and that’s why we decided to grow something with the beans to replace the weeds.”

In 2017, Mr Hares trialled a wheat and bean intercrop plot, at a seed rate of 175kg/ha wheat and 125kg/ha beans. This achieved a significant 73% drop in weed biomass compared with the bean monocrop.

However, this unfortunately came at a yield penalty for the beans, with a total yield of 1.7t/ha for the two crops, prompting him to investigate seed rates the following year, to see if successful weed control without yield penalties was possible.

Bean seed rates were raised and wheat seed rates reduced. A 1ha plot of monoculture beans, of the variety Tundra, was drilled at 200kg/ha. An intercrop was drilled on 5.3ha, with 200kg/ha beans and 100kg/ha of Mulika wheat, planted in two passes using a weaving drill in October 2018. 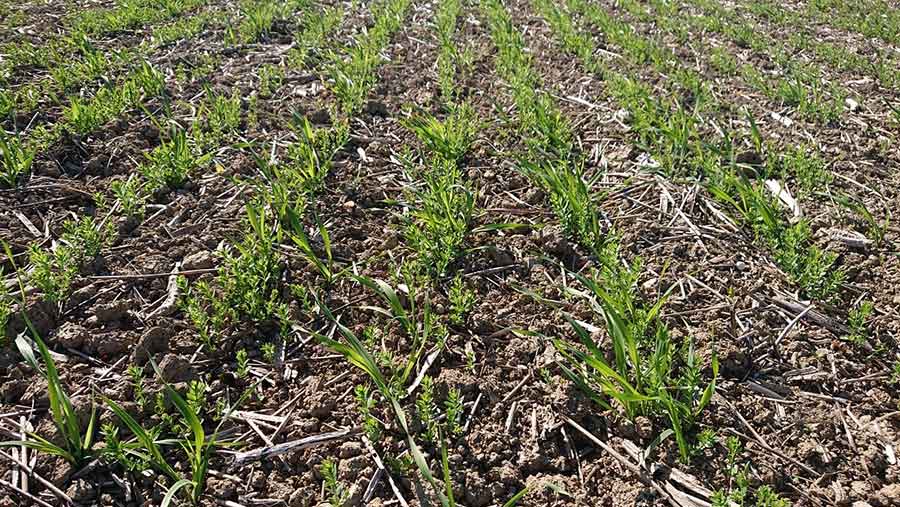 Yields of the intercrop significantly increased as a result of improved weed control and reduced competition from the wheat compared with the previous year. Total yields averaged 2.5t/ha (0.8t/ha higher), while weed biomass was 75% lower in the intercrop than the monocrop.

However, due to excessive weed burden in the bean monocrop, Mr Hares took the decision to destroy the crop to prevent the wild oats going to seed, which meant no monocrop yield results were obtained.

He says: “We just could not bring the monocrop beans to harvest as there were considerably more weeds than beans, which were beginning to become overwhelmed.

“This highlighted to us how successful the wheat was at competing with the wild oats. The wheat filled the gaps between the bean crops before their canopy filled, reducing weed abundance which is particularly vital as bean canopies remain open and exposed for a long period.”

Protein content of the intercrop wheat was also found to be higher than that of the monocrop wheat while the Hagberg falling number was also greater at 411 seconds compared with 384 in the monocrop sample.

Based on the success of their trial, Mr Hares and his father are growing all 20ha of their bean crop with a wheat intercrop this year.

Kent grower Andrew Howard, who farms 300ha of arable at Bockhanger Farm, trialled a range of intercropping techniques, run by the Innovative Farmers Network, hoping to enhance crop establishment and boost yields across his linseed and oilseed rape crops.

Mr Howard operates a low-input no-till system, growing wheat, barley, oats, beans, peas, lentils, linseed and grass seed across a range of soil types, where he has cut an impressive 50% of his inputs in the past five years.

After his linseed crops suffered from low establishment, due to flax flea beetle attacks where crop stems were damaged before the linseed had chance to emerge, Mr Howard noticed that parts of the field with higher levels of wild oats also experienced lower pest damage.

“We decided to carry out a trial to investigate if oats could aid linseed establishment via a reduction of pest pressure,” he says.

The oat companion was then sprayed off once the linseed established. 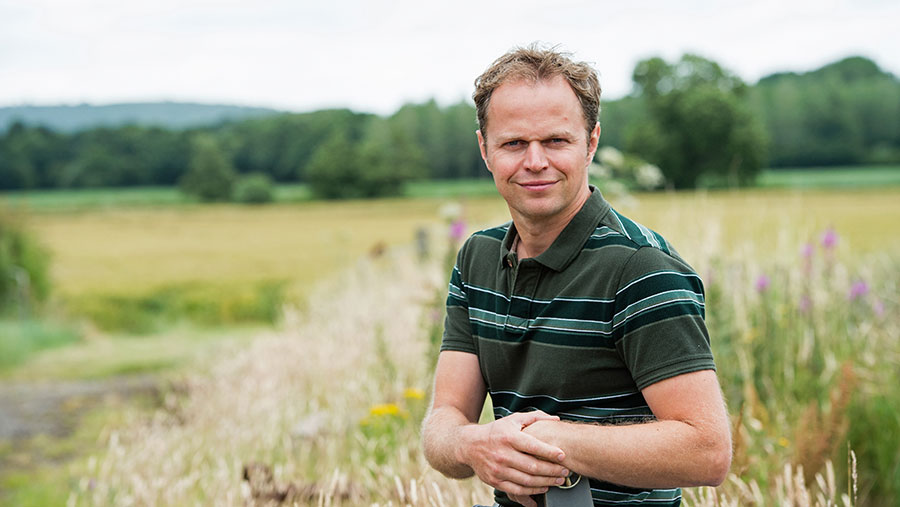 He believes the oats help the linseed to grow, possibly stimulating crop growth through their effect on the soil, rather than acting as a physical flax beetle deterrent.

A further investigation was carried out, assessing the impact of oats on oilseed rape establishment by minimising flea beetle pressure, and the effect of rapeseed in reducing lodging in peas.

Mr Howard drilled marrowfat peas on 30 March last year at a seed rate of 70 seeds/sq m, with and without oilseed rape and an oat companion, with a range of seed rates tested to help find an optimum scaffolding support in the peas, since oilseed rape plants help reduce lodging in peas..

Unfortunately, the rapeseed did not make it through to harvest due to poor establishment and cabbage stem flea beetle attacks, but despite it failing, the trial still provided some useful insights, as the intercrop gave some insurance, as Mr Howard was still able to harvest the peas.

Tissue tests from the oilseed rape crops also highlighted that the pea intercrop significantly enhanced the crop’s nutrient levels, despite no artificial fertiliser being applied.

However, a potassium deficiency in the rapeseed was identified, which Mr Howard suspects was due to the fact that pea crops have a particularly high demand for potassium.

Mr Howard says perhaps slightly more oilseed rape survived with the oat intercrop, but the overall finding from the trial was that growing spring rapeseed was no longer viable in his rotation. He adds that despite it failing the intercrop did provide some insurance as he was still able to harvest this.

Innovative Farmers is part of the Duchy Future Farming Programme, funded by the Prince of Wales’s Charitable Foundation.

The network is backed by a team from Innovation for Agriculture, Linking Environment and Farming (Leaf), the Organic Research Centre and the Soil Association.