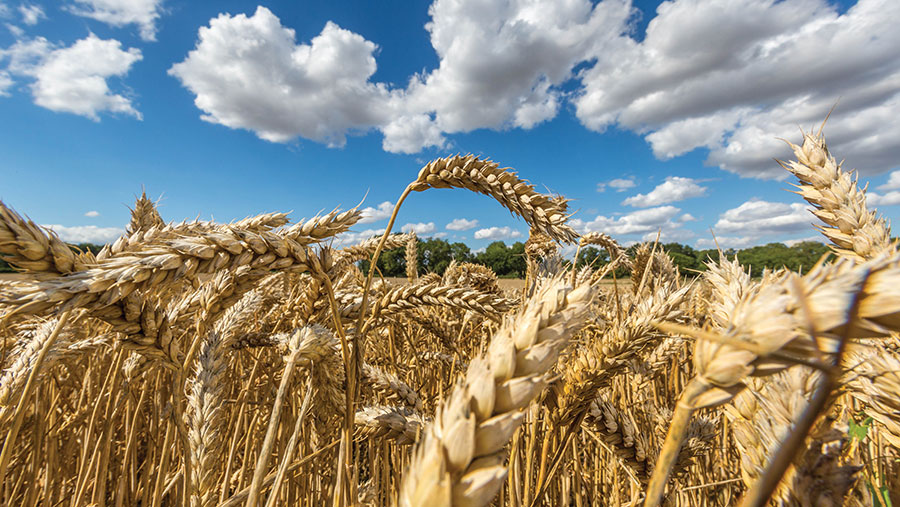 Soft-milling biscuit-making wheats are experiencing a revival led by better price premiums and varieties, and could see a further increase in area this autumn.

For wheat growers struggling to meet 13% protein bread-making quality and worried about putting on increasing levels of nitrogen, the lower protein demands of biscuit-makers may appeal.

We take a look at the growing popularity of these wheats and seek views on the prospects for these once very widely grown wheats.

Sussex grower Duncan Ellis is impressed with the new biscuit-making wheat Firefly in a very tough season and says if it yields well at harvest, the variety may take over from Basset.

Growing the new wheat on the top of the South Downs on a slope facing the sea, the crop looks well, is fairly clean of disease and has good, stiff straw. 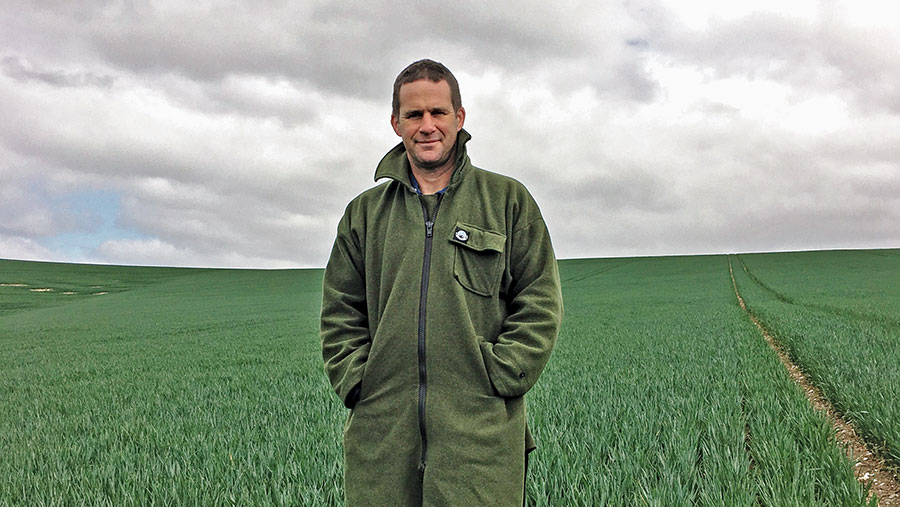 “The crop looks as good as any on the farm in a very tricky season,” he says from Litlington, East Sussex, where he farms with his father, Ray, and uncle, Peter.

Farms 1,400ha, of which about half is arable, growing winter wheat, oilseed rape and spring barley

The 50ha block of the variety is being grown for seed on the family farm, which focuses on quality milling wheat varieties such as Skyfall, Siskin, Basset and Firefly, rather than feed varieties.

The crop was direct drilled in the autumn following oilseed rape and it established well before receiving 220kg/ha of nitrogen in a three-way split during March and April.

Yield target
The family team at Church Farm, between Newhaven and Eastbourne, aims for 10t/ha wheat yields, and came very close in 2019, but after a very wet winter and dry spring, the aim is now to reach 9t/ha.

The variety has the best resistance to septoria of all recommended biscuit wheats, but if there is a weakness, it is likely to be its susceptibility to brown rust. 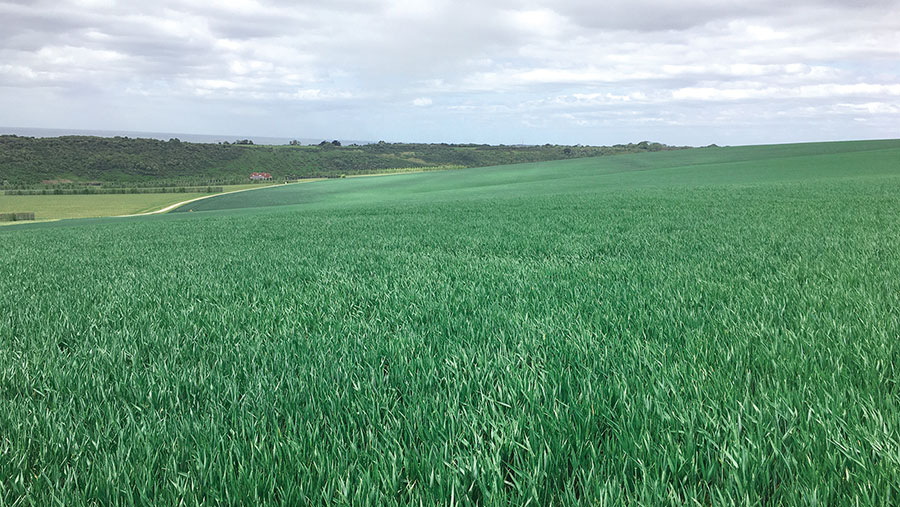 Therefore, the crop received a comprehensive T2 flag leaf spray of Adexar, Epic and Rover, giving the crop the SDHI fluxapyroxad and azole epoxiconazole, plus an extra dose of epoxiconazole and then chlorothalonil, before the latter was banned on 20 May.

Spain and Portugal have a big requirement for Group 3 soft milling wheats, and new varieties such as Firefly and Elicit will help fill this Iberian demand, earning UK growers good premiums over feed wheat.

Martin Perry, senior trader for Bartholomews Agri Food in Chichester, says these two varieties meet the quality of old favourites Riband, Consort and Claire, which dominated the market 15-20 years ago due to their consistency in quality. 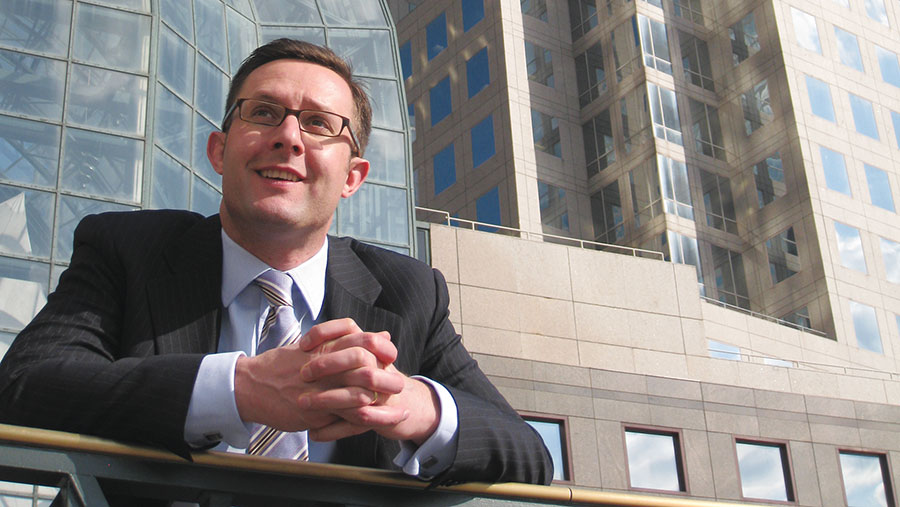 The Iberian flour market is looking for soft wheat varieties that not only meet the traditional specification of 11.5% protein, 250 Hagberg and 76kg/hl specific weight, but also have the correct characteristics for Spanish bread-making. Certain Group 3 wheats can produce extensible dough that can be handled without breaking, and then can be baked straight away

Varieties such as Basset and Barrel helped start a recovery in Group 3 wheats in the UK, but were not up to the quality of the three old favourites, as measured by the Chopin alveograph.

“The good news is that some newer varieties are meeting the criteria. Elicit was commercially proven in harvest 2019 and Firefly should be the same, if not better. For 2020, the premium for specific Group 3 varieties could be up to £10-£15/t,” Mr Perry says.

The Iberian market is the most important, but Algeria, Tunisia and Morocco are also big buyers of soft wheat. Bartholomews trades about 500,000t ex-farm grain annually and exports from its facility at Shoreham Silos in West Sussex. 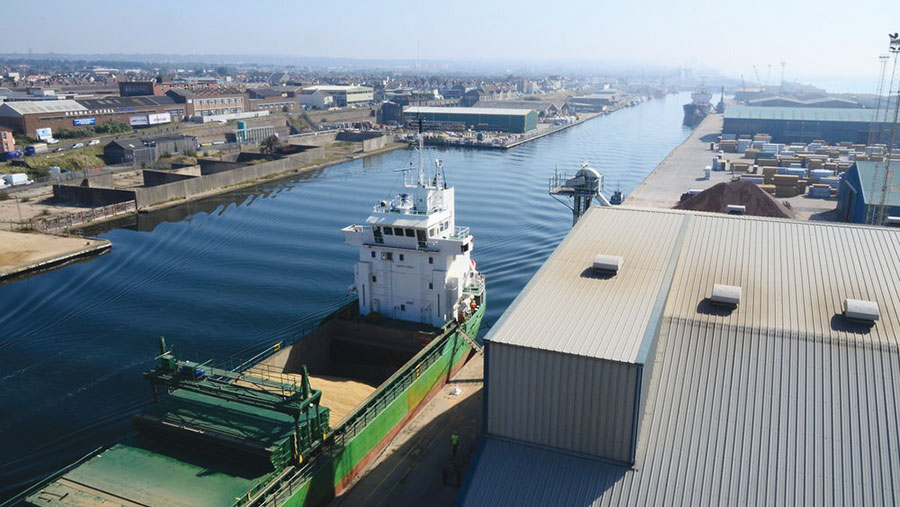 Firefly is coming to the wider market with the advantage of good resistance against wheat’s most yield-damaging disease, septoria, and just as a key fungicide is banned.

Mark Dodds, wheat breeder at KWS, says Firefly is a natural progression from the group’s other varieties, Barrel and Basset, with better septoria resistance. This is more important than ever as the multisite fungicide chlorothalonil was banned this month. 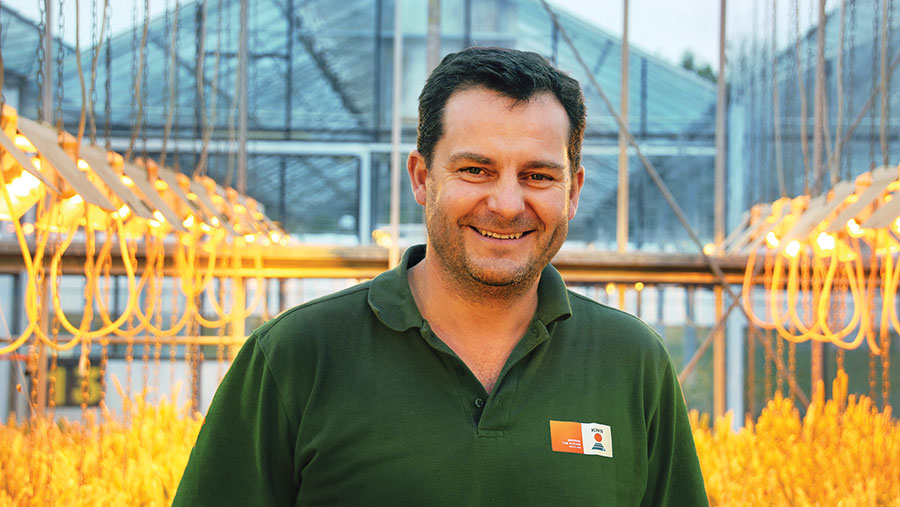 The new variety is the top-rated Group 3 soft wheat, with a septoria rating of 7, against Barrel at 4.3 and the next best Elicit at 5.5.

One area of concern is brown rust resistance, and this disease rating was downgraded last October to a 6, from a previous 8. This compares with Barrel and Basset on 5 and Elicit on 7.

“This is a safe variety for farmers to grow, as brown rust is a lot easier to control than septoria,” Mr Dodds says.

The variety is a good all-rounder, with the joint stiffest straw on the AHDB Recommended List along with Skyfall on an 8. It is also good on light and heavy soils and in first or second cereal positions, he adds.

It is good for the domestic biscuit and export markets, with the highest hagberg and protein of the Group 3 wheats, and 2-3% ahead of the next best in terms of yield in both fungicide-treated and untreated trials.

The revival of the soft milling Group 3 wheat varieties is well under way, with the area doubling over the past three seasons, driven by solid domestic and export demand.

Joe Brennan, policy and research office for the National Association of British and Irish Millers (Nabim), says the recovery has been led by new varieties with strong agronomic characteristic, including good disease-resistance packages. 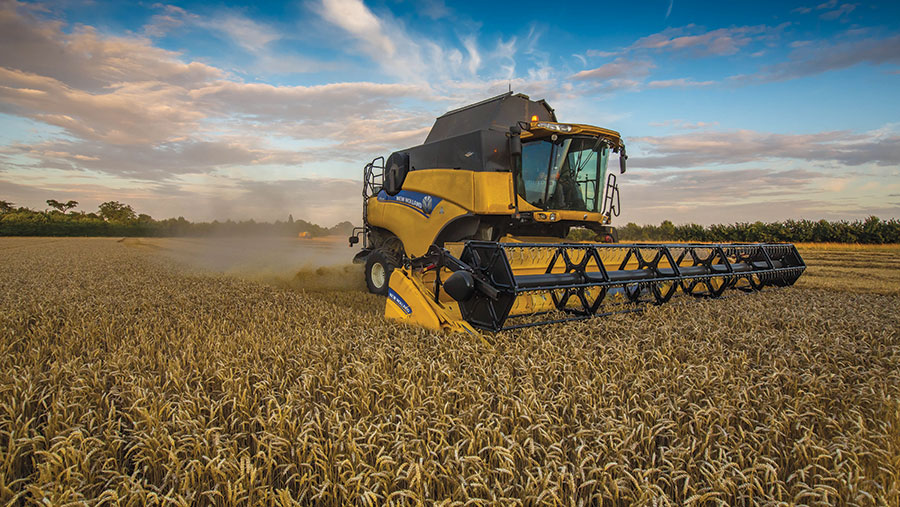 “There is strong demand for Group 3s, and there was a comfortable balance, with about 10% of the area in Group 3s, whereas 2017 was a very tight year,” Mr Brennan says.

There is good domestic demand from flour millers, as these wheats give stretchy gluten that can deliver the dough required for a range of baked products, such as biscuits and cakes.

“They cannot easily be replaced, and with consumers eating more of these products, there is strong demand from the UK baking industry for flour produced from Group 3 wheats,” he says.

However, there are nuances in terms of end-user requirements, so before selecting which varieties to drill, growers should ensure they know what their local market requires.

The biscuit-making wheat revival is being driven by a new generation of better varieties and more attractive price premiums to encourage growers into these soft wheats.

James Webster, AHDB senior market analyst, says the recovery started with varieties such as Barrel and Basset, and continued with Elicit and then Firefly.

“The big difference came with septoria resistance, bringing levels up to other wheat groups,” he says.

Domestic supplies were very tight a few years ago in 2017, with the Group 3 area down to 5% of all wheats, and the shortage saw the price premium rise to £10-£15/t.

Nabim biscuit-making standards quote protein of 11.5%, a hagberg score of 220 and specific weight of 74kg/hl, compared with bread-making standards of 13-250-76, while there is a significant export trade to markets such as Iberia and North Africa.

“Members of the growing middle class in countries like Morocco and Saudi Arabia, for instance, have developed an increasingly sweet tooth, which is helping to fuel export demand for UK-produced Group 3 wheats,” he says.