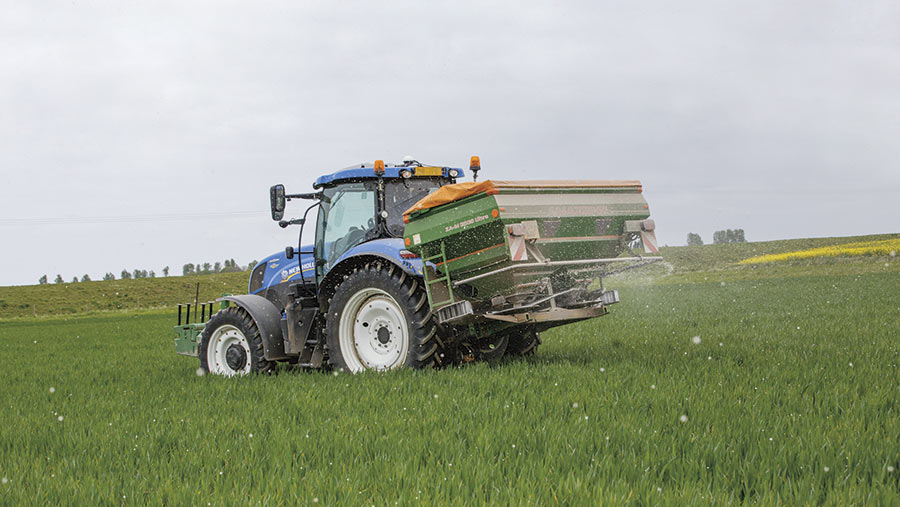 An average of 40% of the nitrogen fertiliser applied to crops isn’t utilised and could be lost. However, by making small changes to fertiliser use, farmers can reduce these losses and boost margins.

In a normal season, most farmers will achieve a nitrogen use efficiency of somewhere around 60%, says Frontier national crop technical manager Edward Downing.

However, research has shown that 80% is achievable and he believes this is what farmers should be aiming for.

So what does 60% efficiency look like? Take a wheat crop yielding 8t/ha with a grain protein of 10.8%. This crop could have typically received 200kg/ha of N fertiliser.

“This crop has taken up 190kg/ha to support this level of output and if you assume about 70kg/ha is supplied from soil, that leaves 120kg/ha coming from fertiliser,” he says. This equates to 60% of the total applied.

Looking at the benefits of improving efficiency, in a situation where nitrogen is limiting yield, it will lead to increased output.

“If a farmer can increase uptake to get up to 9t/ha, the efficiency rises to 72% and it brings £160/ha extra margin.”

If nitrogen is not limiting, improving efficiency to 70% means the farmer can save on fertiliser and apply only 171kg/ha for the same yield and protein.

Here are six areas where farmers can improve their fertiliser use efficiency.

1. Other nutrients and soil pH

A deficiency in another nutrient can lead to a lower nitrogen use efficiency.

One example is sulphur, which has an important role in protein synthesis. A shortage in this macronutrient is linked with poorer nitrogen uptake, Mr Downing says.

“Don’t forget soil pH, as this also affects root development too,” he says.

Mr Downing points to lime use in the UK, which has been declining over the past 14 years, and if this trend continues there will be zero use by 2040.

Another factor hitting fertiliser efficiency is losses from soil. There are two key processes at work here: ammonia volatilisation from applied urea and nitrate leaching.

Aside from the environmental benefits of reducing ammonia, Mr Downing believes tackling these losses can potentially save tens of kilograms of fertiliser, which can be a substantial saving.

Switching from urea to ammonium nitrate fertiliser is one way to eliminate ammonia loses, as it does not volatilise.

“Another option is to incorporate urea in soil, but I can’t see this being practical,” he says.

Timing is important and farmers should avoid warm, dry conditions when applying urea, as this favours volatilisation.

However, urease inhibitors can virtually eliminate this problem, by controlling the conversion of urea to ammonium.

He highlights Adas data showing a 75% reduction in ammonia losses when using an enhanced urea product instead of straight urea.

In one Frontier trial, there was a nitrogen use efficiency of 62% with liquid urea-ammonium nitrate (UAN). Two different urease inhibitors were being tested and both increased efficiency to 70%.

Although nitrate is a very mobile form of nitrogen, if there is a growing crop present, it will take up the nutrient.

Mr Downing says the leaching problem arises when there is more nitrate than the crop can take up during periods of heavy rain. It is a particular problem for bare stubbles in winter when rainfall is higher and there is no crop taking up any nitrogen.

That is why cover crops are valuable, as they can capture this nitrogen.

Nitrification inhibitors are also useful, as they delay the conversion of ammonium to nitrate by about 6-10 weeks.

Frontier has even looked at tackling losses from soil by taking soil out of the equation with a foliar approach.

“We didn’t end up killing the crop and it yielded similar to the control,” he says. “The results look promising and we will be repeating the trials this year.”

In season, farmers should be prepared to revise fertiliser rates up or down and not simply stick to the original plan.

Crop imagery and biomass measurements from drones and satellites, along with N sensors and tissue testing, are useful tools for seeing how crops are taking up N and getting a better estimate of their requirements.

5. Apply at the right time

“One limitation is with nitrogen+sulphur products, as this ties you into specific rates and timings,” he says.

“Go by conditions, not calendar date,” Mr Downing says, pointing out that the first and last applications are the ones at greatest risk of losses.

The first dressing is key to get the crop off and running in the spring and preserve tillers, but it is also the most at risk of leaching.

“So you need to ensure there is sufficient crop growth to ensure uptake, and monitoring soil temperature will help with this.”

Conversely, with the last dose, dry soils with high temperatures can be a problem, increasing ammonia volatilisation and reducing nitrogen uptake.

“Be prepared to pull the timing earlier if it is looking to be warm and dry like last year,” he says.

Finally, get your fertiliser spreader tray tested and ensure it is as accurate as possible. Poor accuracy can be a real problem with wider bouts.

Technology is helping, with auto shut-off helping avoid overlaps with irregular field shapes. and Mr Downing says there is even an Amazone spreader that adjusts spread pattern according to wind direction and speed.