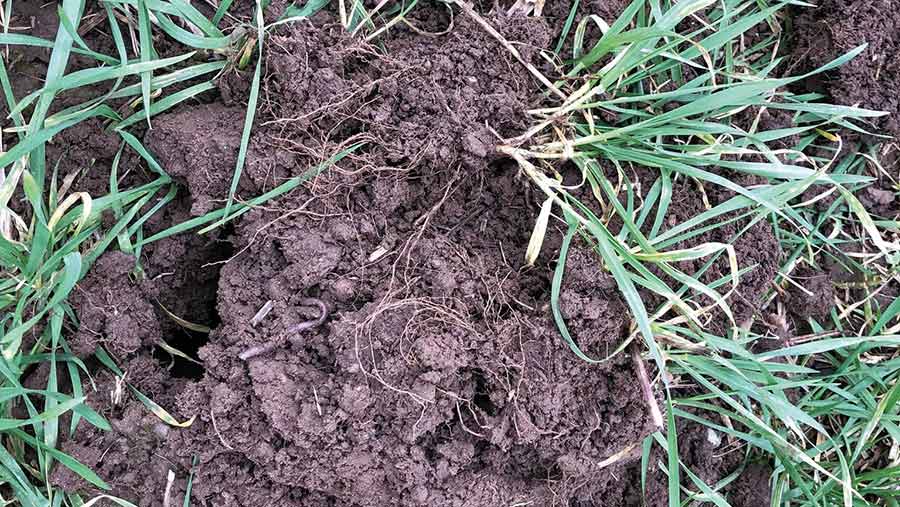 He fuels the health of his soils and crops through a combination of home-brewed microbe and fungal mixes and timely micro-nutrient sprays.

He places nutrition and nature at the heart of his crop production strategy, taking regular sap tests to ensure optimum crop nutrition.

“Nutrition is everything when it comes to crop health. A healthy soil is a healthy crop and healthy crops have the ability to withstand pests and disease,” he explains.

It was the deterioration of soils, spiralling chemical input rates, declining worm counts and the inevitable realisation that subsidies wouldn’t continue forever which spurred Mr Parton to start farming Brewood Park Farm as biologically as possible back in 2009.

“Increasing nitrogen usage was the biggest concern. Soils were requiring more nitrogen to achieve the same results and we were using more and more fungicides.

It was a vicious circle and the soil was becoming a drug addict. I knew something had to change.”

More than a decade since starting the process, Mr Parton now applies zero fungicides, seed dressings, plant growth regulators, pesticides and pre-emergence herbicides to his 300ha of arable cropping, with the help of Nick Woodyatt from Aiva fertilisers. 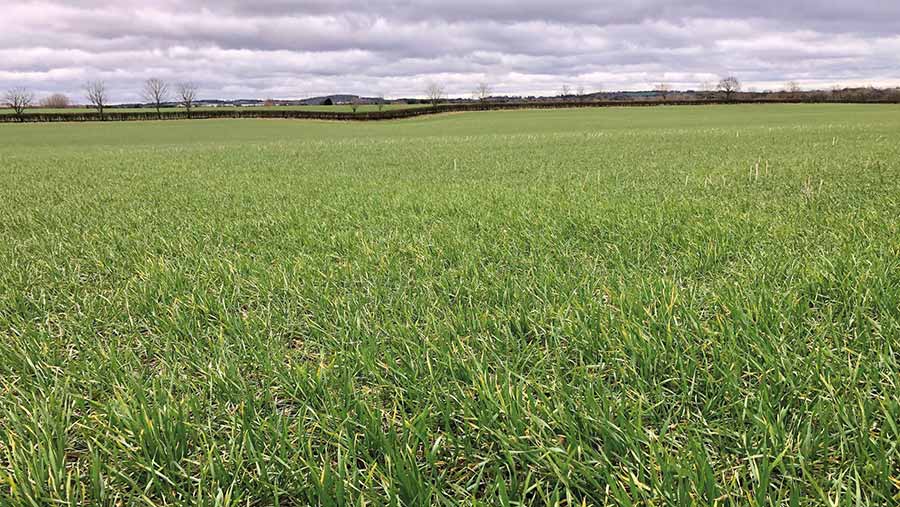 Winter wheat production costs are now a fraction of what they were previously. Some wheats received just 60kg N/ha and standard wheats 120kgN/ha, while spring barley receives 36kg N/ha.

“Most nitrogen we use is derived from a foliar amide spray which is just one step behind an amino acid which does not require the energy usage from the plant to convert it into proteins, making it far more efficient than granular fertiliser,” says Mr Parton.

There have been no P and K applications for 12 years. In fact, indexes are increasing so much that he is now selling straw as P levels are getting too high.

Now, his ultimate aim is to get soil microbes working so that they effectively cycle nitrogen, which would eliminate liquid fertiliser sprays. “A bold aim but certainly one which is achievable,” he claims.

“If you asked me 20 years ago I never would have thought I would be farming like I am today. You really have to believe in what you’re doing. If you research the science behind soils, everything makes sense.” 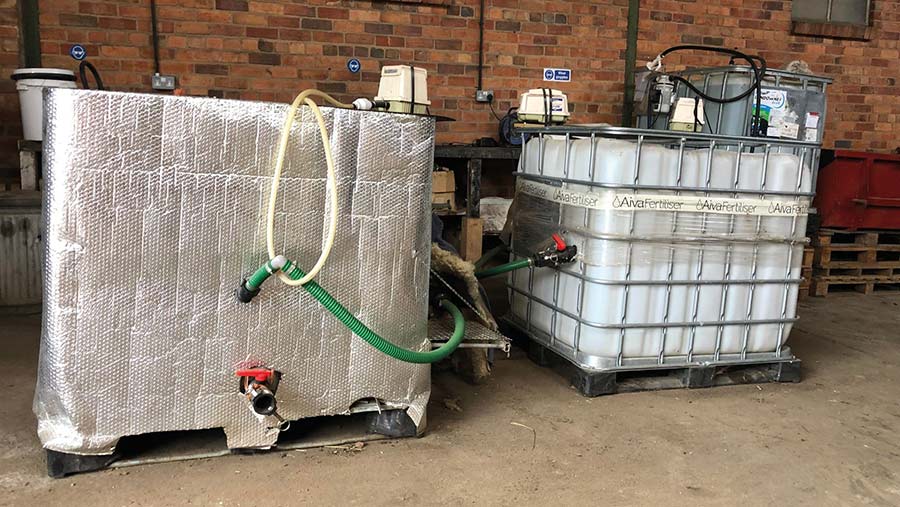 The mix is applied as a seed drench at drilling and as a foliar spray throughout the growing season, containing a range of microbes and bacteria to optimise crop performance:

The mix is brewed in an IBC containing 500g of microbes and fungi alongside five litres of Nurture N. Borehole water is used to avoid contamination with chlorine which could harm micro-organisms.

The mix is brewed for 12-24 hours between 18-20C. He recommends any farmers using mains water to aerate the water for an hour before adding any microbes.

In the first trial year, nitrogen rates were cut back by 40kg/ha of N from 240kg/h of N, and yields increased by 1t/ha.

All arable cropping now receives a dose at drilling, alongside a splash of diatomaceous earth, included for its silicon content which keeps the cell wall strong and replaces the need for plant growth regulators.

Humic, fulvic and salicylic acid as well other key trace elements are added according to specific soil types/crop species and made up to a total 100 litres/ha volume.

To avoid this risk, he is starting to derive microbes from horse manure which he makes into compost, using the Johnson-Su process.

He assesses the manure contents under the microscope and adds humic acid and fungal spores if required, before brewing in an IBC.

The freshly brewed liquid is then added to the hopper ahead of drilling with a modified John Deere 750 A drill.

Each drill leg is kitted out with individual pipes and fitted with a peristaltic pump system (designed by engineer Trevor Tappin), liquid blockage monitor and calibration kit.

The drill places the drench directly on top of the seed, so that bacteria and fungi are supplied into the crop’s biosphere.

“The peristaltic pumps use a gentle squeezing action to pump the drench though the drill, avoiding pipe blockages and potential microbe damage,” he says.

Mr Parton used to operate a min-till system and would rotationally plough for winter barley.

He then transitioned to a Claydon strip-till drill, before making the move to a complete direct drilling process which he notes helped control brome populations. 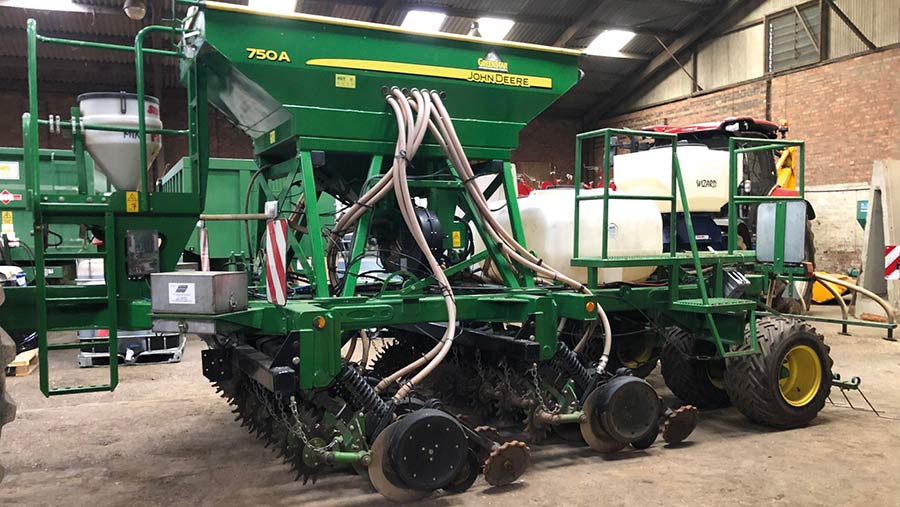 Foliar microbe mix sprays are also applied to crops throughout the season to keep crops strong and control disease.

Anywhere between two to four sprays are applied at similar timings to the T1, T2 and T3 spray at a minimum volume of 200 litres/ha. However Mr Parton prefers to use “FS timings” (foliar sprays).

Foliar nutrition applications go on in the late evening as ultraviolet light can harm bacteria and fungi.

Most plant growth occurs between 3am and 8am, so evening application provides all the required nutrients for optimal crop growth.

An on-farm trial investigating efficacy of the spray found 2% of treated crops to be infected with fusarium, compared to 36% infected in the control.

Consequently, Mr Parton has not used a full fungicide programme in four years.

He admits he used one application last year on a couple of fields after an influx of yellow rust, but he left an area clear of fungicide which overcame the disease and experienced no yield penalty.

“I now have the confidence to completely stop using fungicides as crops have the power to overcome disease pressure themselves. I’ve got to the point in my 10 year-plus journey where this is now achievable,” he says.

Mr Parton samples an old and new leaf from each field every 10-14 days to identify what’s going on in the plants, tweaking nutrition programmes accordingly.

“I find sap testing is more beneficial than tissue testing as sap samples can identify what is likely to happen in the crop, whereas tissue tests show what has already taken place.”

Samples are then sent to Nova Crop, based in Holland, at a cost of £14/sample. “Results are timely. If I send samples off on Friday I get the results by Tuesday.”

Since Tim Parton’s biological farming transition back in 2009 a number of noticeable changes have taken place at Brewood Park Farm:

Mr Parton says taking the first step into this farming practice was a truly daunting exercise, but it made it all the more important.