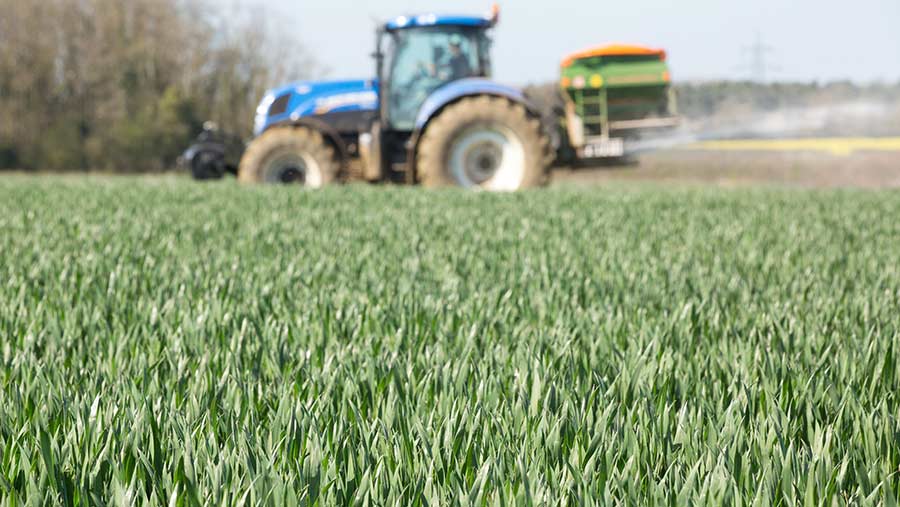 Wheat growers need to match the nitrogen needs of modern milling varieties to make sure they hit the demands of breadmakers more consistently in terms of protein content.

Agronomists are looking at how different milling wheat varieties, such as Skyfall and Trinity, balance nitrogen needs for yield building and protein content.

“Wheat will always use available nitrogen to create yield before building quality, so if you don’t supply enough nitrogen you will never reach the point at which it is being used to increase grain protein content,” she added.

Modern wheat varieties such as Skyfall and Trinity have huge yield potential, but growers have to be realistic about whether these can be achieved on their own farms. If not, no amount of nitrogen will improve things.

Trials with Skyfall have shown the more nitrogen fertiliser you apply, the more it builds yield, with protein remaining relatively stable, so the higher nitrogen rates give the best margins.

In contrast, trials with Trinity show the optimum rate could be 20-30kg/ha of nitrogen lower than for  Skyfall. Where higher rates were used, these improved protein levels, but without always adding to yield.

“It’s very likely that in many crops of Skyfall where protein is less than expected, plants are not reaching that point at which they start to produce it sufficiently,” says Ms Grundy.

Her trials indicate that achieving this can mean using nitrogen application rates of 300kg/ha plus, so knowing what nitrogen the soil can contribute is essential.

Testing for soil mineral nitrogen (SMN) is a good starting point. But more accurate is a N-Min test that combines the SMN analysis with a measure of additional available nitrogen (AAN) – the nitrogen likely to be mineralised in the soil between spring and harvest.

When SMN and AAN are added to the amount of nitrogen already taken up by the crop during autumn and winter, it gives the full picture of soil nitrogen supply (SNS). When a yield target is set by a grower, the CF nitrogen calculator tool N-Calc can be used to work out the nitrogen requirement to give the highest economic return.

Across eight farm trials where nitrogen need was calculated in this way, margin improvements of £75-£150/ha over standard farm practice were recorded.

Trials have shown that four, maybe five, applications are better for the larger amounts of nitrogen needed by hungry milling varieties, with smaller amounts each time improving the take-up of nitrogen.

In slow growing years, early nitrogen can be used to build tiller numbers and in forward crops, later applications can be adjusted to help thin crops.

“Ideally, we’re aiming for about 1,000-1,200 tillers/sq m to build about 400-600 ears/sq m. For more forward crops with 2,000 tillers/sq m, delaying the first application will be beneficial to starve some of this growth off,” Ms Grundy says.

Adequate levels of phosphate and potash are essential to avoid growth checks and soil indices of about 2 are needed to ensure optimum nitrogen use, while sulphur is also critical.

“Sulphur is required for the formation of the long-chain amino acids cystine and methionine, which help add volume and elasticity to dough and are key components of high-quality milling wheat,” she adds.

Analysis of nitrogen needs and fine-tuning applications helped Jon Birchall of Sundorne Estates, near Shrewsbury, hit protein specifications with all his milling wheat in 2017.

With 170ha of milling wheat – and 66ha of Illustrious joins Skyfall for 2018 – balancing the relationship between variety, yield and quality is key.

“You can get carried away by yields, but it is margins that count. Hit the right spec and that can make up for a shortage in yield, plus if you go all out for yield you can dilute the protein so much that you miss out on the buyer’s protein spec,” he says.

Growing for breadmaker Warburtons, his aim is to hit 12.5% protein, while many other millers look for a 13% protein level.

“Warburtons likes Illustrious because it mills and bakes well. We have gone for it for the first time this year, but generally its view is that quality of protein is more important than outright protein levels. It can bake with slightly lower protein, but it has to be the right protein,” he adds.

N-Min testing is carried out in early spring and depending on results, different rates are applied to achieve the required results, Mr Birchall explains.

“By and large we are aiming for 10t/ha crops at a protein spec of 12.5-14%, with the lower end of this obviously being suitable for Warburtons,” he says.

Last year, the estate applied between 165kg/ha and 225kg/ha of nitrogen depending on the field and the result of N-Min testing.

Granular fertiliser goes on to all milling crops in mid-March to provide 40kg/ha of nitrogen and 44kg/ha of sulphur, followed by two equal doses of ammonium nitrate and then a final top-up dressing in early June.

The late application is key to securing the protein, and last year the fertiliser manufacturer suggested using a new flag-leaf test under development to predict protein content in the final crop. This was taken in May and it predicted the farm was on target for 14% protein.

“As a result, we decided to keep the final application at 40kg/ha as suggested by N-Min and N-Calc and applied it on 8 June. At harvest all crops hit milling spec,” he says.

“Using organic manures on milling wheat presents particular challenges. As well as understanding precise nitrogen availability to manage protein levels in the grain, you also have to keep material away from the ears at emergence and even when they are developing in the stem,” he adds.

The nitrogen requirement was calculated to range from 25kg/ha to 243kg/ha to achieve a yield of 10- 12t/ha at 13% protein content.

Mr Steer says the farm practice is to put on a maximum of about 220kg/ha of nitrogen on feed wheats and up to 300kg/ha for milling wheats, so testing showed the farm was probably too high on some fields.

Flag leaf samples were taken in late May and on the N-Min-tested crops the protein estimates were about 12.7%, but the test on the general farm practice crops revealed average protein levels approaching 14.4%.

Mr Steer says it was valuable information, and as a result he decided to apply the last 40kg/ha application for the N-Min crops, but cut out the final dressing for the farm practice crops.

“As it turned out the grain at harvest averaged about 13.8% protein, so it looks as if the prediction was accurate and we were able to balance things out with the final fertiliser decisions we made,” he adds.