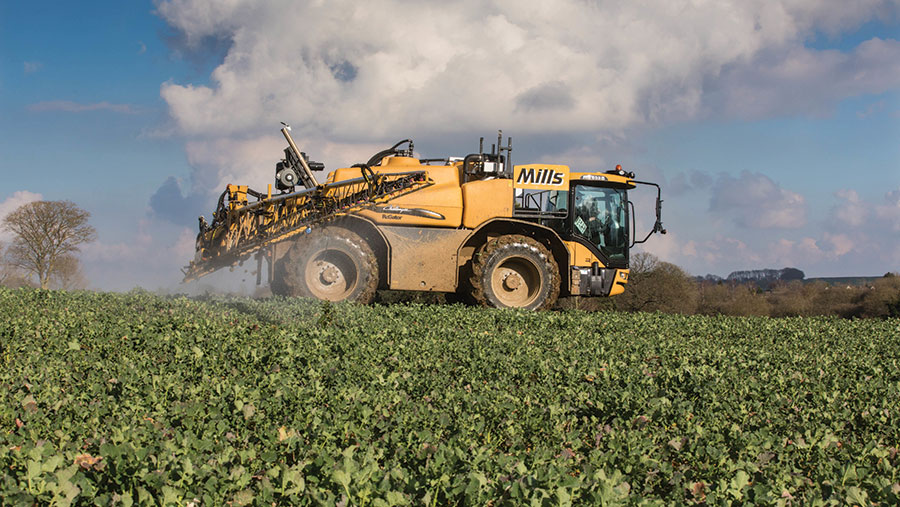 Correcting micronutrient deficiencies in oilseed rape can raise yields by an average 0.3t/ha, according to trials, helping growers get even more from a crop that is proving to be increasingly expensive to grow.

Many growers are already tackling some micronutrients, such as manganese, in rapeseed crops, but there may be others that are holding back yields.

Yara leaf tissue tests collated at its Pocklington lab in 2019 revealed that 70% of the 6,479 samples were deficient in boron, 60% in magnesium, 30% in manganese and 15% in molybdenum.

However, further analysis reveals that farmers are acting to tackle some problems, as there is a discrepancy between the tissue tests and soil samples, says Mark Tucker, agronomy manager at Yara.

“Some 90% of soils were deficient in molybdenum, but it’s only required in small amounts and crops are accessing it well,” he explains.

“The results are slightly at odds because we don’t think it’s a micronutrient most farmers are addressing.”

About 40% of soils were deficient in magnesium, substantially lower than the leaf test analysis.

“Farmers might be soil testing and thinking the levels are okay, but for whatever reason, the availability is poor.

“So it’s worth backing soil tests up with tissue tests,” advises Mr Tucker.

Though boron and magnesium are classically problematic in tissue tests, the growing theme across all crops is a deficiency in zinc – up to 60% in some cases.

“We have not explored the yield response to this yet, but soils appear to be in good shape – about 20% deficient – so this suggests that zinc levels are okay, but the crops aren’t accessing it.”

Manganese is a critical nutrient that allows the crop to metabolise nitrogen, explains Mr Tucker.

“Rather than free nitrate sitting in the leaf, it allows the plant to access its amino acids and proteins, helping dry matter growth.”

When it comes to boron, there are two critical stages when demand is high; during the autumn and at stem extension.

“In the autumn when a lot of cell division is happening, every cell produced has a demand for boron – alongside calcium – to ensure the integrity of its membrane,” says Mr Tucker.

“In the spring, roots and shoots are formed and cell expansion happens as the plant gets bigger – so it needs boron to allow the cell wall to hold its structure.

“It’s also associated with good pollen, so is good for fertilisation, pod and seed set.”

It allows for better crop establishment and spring regrowth, as well as improving flowering – deficiency can mean lower oil content and yields.

Magnesium is especially important for photosynthesis and aids pod fill, while zinc helps root development and dry matter growth, as well as being integral to yield.

High sulphur is a risk with molybdenum as it can restrict access to the micronutrient.

“Be cautious with how much sulphur is applied in one go, otherwise you can end up solving one agronomic problem by causing another.

“Typically, we recommend about 75kg/ha of sulfur trioxide – even on the most extreme sites – split two ways to avoid causing molybdenum deficiency.”

Most deficiencies are driven by soil conditions: having too acidic a pH can hinder molybdenum accessibility, so ideally this should be above 6.4, explains Mr Tucker.

“The classic use of lime to raise the pH is fine.”

However, if soil pH is high – around 7 or 8 – this could increase the chance of boron deficiency.

High or low organic matter levels can also negatively impact nutrient uptake – especially boron – so 4% is the ideal level to aim for.

“Autumn applications may well be driven by farm data from previous years.”

However, soil testing is more accurate: take a selection of soil cores, at least one every 10ha block.

“Growers might wish to use field maps or satellite imagery to target where to test.

“A random walk across the field might not tease out the key issues.”

In spring, there is a greater window of opportunity to get on the field, so growers should tissue test from March to drive foliar applications as the crop goes into its rapid growth stage, he adds.

If the field has a nice, even performance, taking leaf samples in the classic “W” pattern is fine.

“Have a date in mind and work back from that, to allow time for leaf testing, analysis, and to order the correct treatment,” advises Mr Tucker.

He also suggests reviewing the strategy each year.

“If you are testing, review your applications to see if these are putting your crops in a better position.”

Interpreting the sample results will depend on the individual lab report.

“Some have comments indicating what to do next.

“As of 2020, Yara’s reports will have a guideline specific to crop growth stage – this will give a better interpretation of what the crop needs and when.”

Treatment should be tailored to which nutrients are deficient.

Producers can choose individual products or opt for multi-mix fertilisers where there are multiple deficiencies.

“Farmers can tank mix straight products, but make sure there is good compatibility with whatever is going on at the same time.

“Multiway mixes take this risk out as the compatibility is tested before.”

However, with multiway mixes, growers should make sure there’s enough of each nutrient required to overcome the deficiencies.

“Don’t just apply a token tonic – check product websites and with your agronomist to be sure,” he advises.

Treatments – whether seed or foliar – can be applied in both autumn and spring, but it’s likely that those who apply both are chasing 5-6t/ha crops, says Mr Tucker.

“On marginal land, the right approach may be to strategically apply in the spring.

“The important thing is that, on average, over the past four years, our datasets show a yield increase of 0.31t/ha in response to micronutrient treatment.

“The yield response is the same, whether on 3t/ha or 5t/ha sites – it’s still worth the same value and return on investment.”

Detecting deficiencies is a critical part of managing crop nutrition.

A plant deficient in manganese can accumulate nitrogen in the leaves, creating a feeding ground for pathogens and allowing ingress of disease.

Leaves will yellow and mottle; first appearing on middle leaves, then spreading to the older ones.

Boron deficiency appears in the younger leaves, which become small and puckered.

Stems can also crack and flowering will be poor.

“The leaves will be a good colour but smaller.”

There will be reduced leaf area and they will be pale and limp.

Necrosis is a key sign of magnesium deficiency, as well as older leaves developing chlorosis between the veins.

Zinc deficiency appears as chloroses on the leaves, with white or pink necrotic patches.