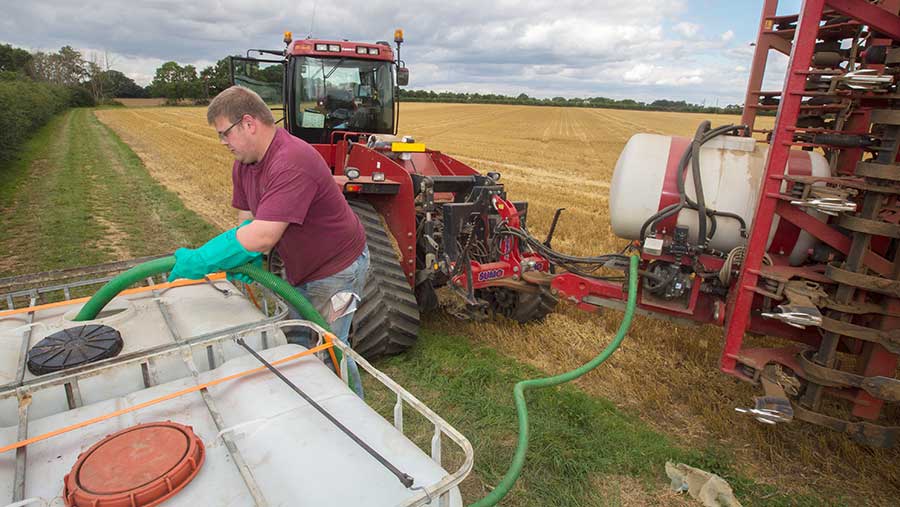 An early application of nutrients, delivered by either a starter or traditional fertiliser product, can help to achieve quick emergence and growth of an oilseed rape crop.

At establishment, the primary focus should be on nitrogen and phosphorous to get the crop off to a good start – as both are essential for early growth and good rooting.

Of these, phosphorous (P) is considered especially important; in the first 60 days after emergence oilseed rape requires about 15% of its total P requirement.

For this reason, timing is important and there should be no delay between drilling and fertiliser application, whatever establishment system and fertiliser type is being used.

Phosphate, which is immobile in the soil, has to be extracted by the roots from a small fraction of the topsoil, which is why enriching the soil in the immediate rooting zone can help.

Nitrogen, which is often supplied by mineralisation when the soil is moved, is a key requirement at drilling in no-till systems, where this effect doesn’t take place.

Many drills are now able to combine fertiliser and seed at drilling or can be retrofitted to achieve this. This one-pass method of application reduces the time pressure at a busy time of year, while placing a combination of nutrients right next to the seed.

As explained previously, this is of greater importance for phosphate, which does not move in soil to the same extent as nitrogen.

The choice of specific product to use at this stage is often controlled by the capabilities of the drill. Some combine drills can cope with high rates of granular fertiliser, while subsoiler type drills are often only able to handle lower rates of microgranules or liquids.

Di-ammoniun phosphate (18:46:0 NPK) is the most commonly used product for this purpose.

This is an ammonium phosphate, so it provides a balanced nutrient boost and gives increased P absorption from being applied with nitrogen.

There is a proven synergistic effect on plant uptake of phosphate where nitrogen is present in the ammonium form.

Starter fertilisers used at this timing include microgranules and liquids. These are applied at low rates and are targeted at the early growth stages – they will not provide the crop with all of its nutritional requirements for the whole growing season.

The main advantage of microgranular products is the increased availability of nutrients through their greater surface area. This means they can supply phosphate much quicker than a standard granular fertiliser.

Liquid fertilisers are 100% soluble and rapidly available. In these, phosphate is supplied in the ammonium phosphate form, bringing the same combined benefits that di-ammoniun phosphate offers.

Autumn nitrogen applications have to be limited to 30kg/ha where the farm is in an nitrate vulnerable zone.

Liming should be considered as part of a long-term strategy for reducing clubroot build-up in affected fields.

AHDB-funded work has shown that clubroot severity is linked to soil pH and crops in acidic soils are more at risk of severe symptoms.

Although the clubroot pathogen is highly resilient and will survive and infect even at high soil pH levels, soil amendments that raise the pH and calcium content of soils can be effective.

A neutral or alkaline pH (+7) is best – but this may not be beneficial for the wider rotation due to nutrient lock-up.