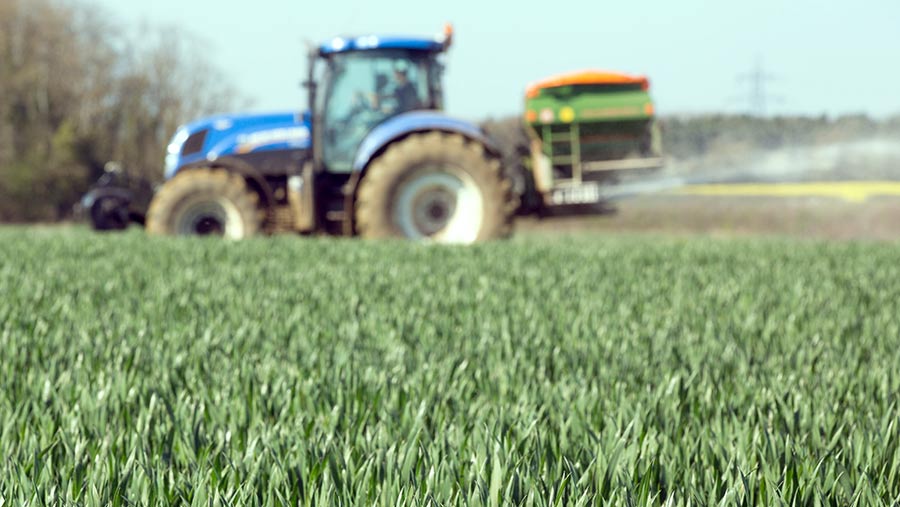 Wheat growers need to look at available phosphate fertiliser levels for their crops and cocktails of micro-nutrients to push yields towards the heady heights of 15t/ha.

Phosphate, the second most important plant nutrient after nitrogen, is often locked up in soils, so only one-quarter of the applied nutrient is available to a growing crop.

Even when soil tests indicate adequate phosphate levels, big yield responses can be seen by using a form of the fertiliser that is readily available to the crop.

Experts from agronomy group Agrii say phosphate is key in encouraging plant rooting to push up yields. It is also important during grain fill and can therefore boost specific weight.

Andrew Richards, Agrii senior agronomist, says yield responses can be seen even in phosphate-rich soils if the correct fertiliser product is applied.

If growers are using a high rate of 300kg/ha of nitrogen fertiliser to try to achieve a wheat crop of 15t/ha, the key is to try to balance other nutrients and apply them at the right time.

Even at a relatively modest nitrogen rate of 215kg/ha on wheat varieties Santiago and Solstice, the different between standard and best nutrition practice was a yield advantage of 0.5t/ha.

His work with Syed Shah, research and development manager at the group, has looked at different forms of phosphate applied to crops to prevent any lock-up of this vital nutrient in the soil.

Dr Shah says in high-pH soils such as chalk downlands, the presence of calcium and magnesium locks up phosphate fertiliser. In lower-pH soils it is iron and aluminium that ties up phosphate.

“Calcium-dominant soils such as the Wiltshire Downs will lock up phosphate and make it unavailable to growing plants,” he says.

He says DAP is the best product in terms of phosphate availability for spring applications, but it can not be used in the autumn, as it contains nitrogen that could be leached out of the soil into watercourses in a wet winter.

If growers are looking to apply phosphate in the autumn – either for late drilling when a quick boost to rooting is needed or in variable-rate fertiliser programme when autumn is a good time to apply phosphate – a coated TSP product can give a yield boost.

A polymer-treated TSP, such as P-Reserve, locks up the four elements that can make phosphate unavailable in the soil and so results in a yield increase.

Even when a soil’s phosphate index is above 2 and just a maintenance dressing of 80kg/ha is recommended, a 100kg/ha dressing of the polymer-coated product can give a 0.55t/ha yield advantage. This has been tested on the range of  soils with pHs lower than 6 and above 7.5.

However, if winter wheat is drilled in early October, when no particular boost to rooting is needed, the best approach is to apply DAP in the early spring (February) before the soil dries out too much, Dr Shah suggests.

As part of a push towards yields of 15t/ha, scientists have also looked at micronutrients levels for wheat crops, and on high-pH soils, regular yield increases were seen from applying magnesium and manganese.

Again using Santiago and Solstice, the difference between a good trace element application and no trace elements was between 0.8-1.0t/ha in yield terms.

In typical high-pH soils such as the southern English chalklands, manganese is often added at the T0 and T1 stages, and magnesium at T2 and T3.

But Dr Shah’s experiment to look at the crop’s needs identified copper, boron and zinc, and a yield response of 0.4-0.8t/ha was seen from the following programme:

Three key micronutrient for spring barley were identified as copper, manganese and magnesium, while little response was seen to boron or zinc.

Yield responses of 0.4-0.5t/ha were seen from applying these three elements at the T0, T1 and T2 stages in spring barley.

Copper was important in term of ear formation and so avoiding blind sites, manganese helps with resistance to powdery mildew and magnesium is useful of for the formation of chlorophyll, or the green pigments in plants.

“Many growers put on manganese and magnesium, but by using copper we are seeing fewer blind ear sites in spring barley,” says Mr Richards.