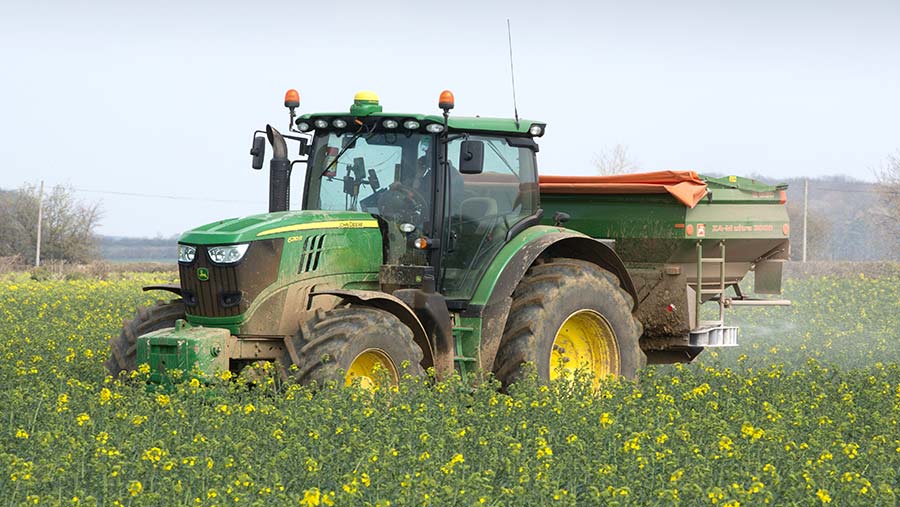 Shropshire grower Matthew Williams has increased his oilseed rape yields while also cutting his fertiliser costs by fully utilising the residual nitrogen in his soil.

Mr Williams’ OSR yields increased by 14% after he carried out N-min testing last season, which confirmed that he could cut back his fertiliser inputs without harming his yields.

As a result of identifying his nitrogen reserves, he was able to increase his margin over fertiliser costs from the crop by £280/ha.

Mr Williams grows about 200ha of oilseed rape at his farm near Bridgnorth, alongside 320ha of wheat and 120ha of winter barley in a typical rotation of two wheats, winter barley, followed by OSR.

A lack of flea beetle in the area means that OSR has traditionally been a good breakcrop on the farm, but last season there were signs their numbers were increasing.

Last season, a single spray took them out, but this season most fields have already had two sprays and some will need a third.

As insecticide costs are likely to increase, Mr Williams is keen to ensure that all inputs are being used as efficiently as possible.

One area which has the potential for improved efficiency is his nitrogen inputs.

Quantities of sewage sludge has been applied to the farm in the past, and some of the arable area has previously been used for livestock, so nitrogen reserves in the soil were likely to be healthy.

Added to this, the preceding crop of winter barley failed to yield as well as he had hoped due to the drought in 2018.

As it had been fertilised for an 8-8.5t/ha yield, some nitrogen was likely to be available to the following OSR crop.

“We had a feeling there could be nitrogen available, but in truth we had no idea,” he says.

“We’re great believers in making sure every input delivers a tangible return, and this is absolutely essential when it comes to our fertiliser use.

“It’s why we have never been encouraged to use liquid fertilisers and why we don’t use urea anymore,” he says.

To find out how much residual nitrogen is in his soil, Mr Williams trialled CF Fertiliser’s N-min testing.

Unlike conventional soil nitrogen tests, CF’s N-min test measures the amount of nitrogen in the soil at the time of testing, but also accurately predicts what will become available to the crop during the season.

This is adjusted to account for the nitrogen that will be supplied from the soil at depths between 60cm and 90cm, with allowances made for leaching losses, deposition and uptake efficiency.

When this is combined with the nitrogen level already contained in the crop, this makes up the total soil nitrogen supply, which is then used in CF Fertilisers’ N-Calc programme.

The trial compared the farm’s standard practice, which is determined by the RB209 Fertiliser Manual, with an N-min based approach, with both being targeted towards producing a 5t/ha crop.

It was conducted over a 12ha area of medium clay loam soil, which was min-tilled before being drilled with the variety Wembley in mid-August.

The farm standard plot received a first application of DoubleTop in mid-February, delivering 67.5kg/ha of nitrogen.

This was then followed by two applications of ammonium nitrate, which added a further 100kg/ha of N, giving a total of 167.5kg/ha of N.

Meanwhile, on the CF plot, N-min testing had revealed nitrogen reserves in the soil of 197kg/ha of N. 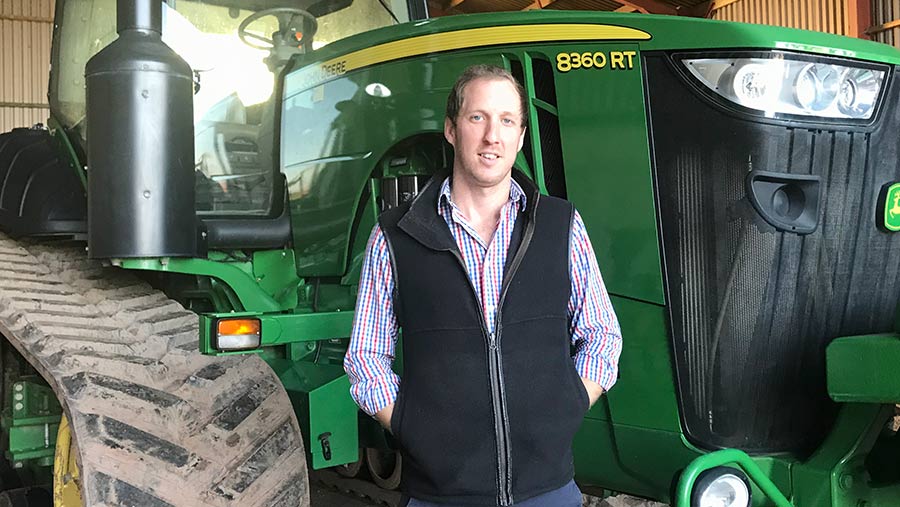 The N-Calc system, therefore, recommended an additional 110kg/ha of N to deliver a 5t/ha crop – nearly 60kg less than the standard farm practice.

This was applied through the same DoubleTop application as the standard farm practice plot, and a single 43kg/ha of N application of ammonium nitrate, which was applied on 20 March.

“I remember looking at the CF system crop and thinking that definitely looks thin compared with the farm practice one and the satellite images confirmed this.

“In fact, we were convinced we were going to have to put some more fertiliser on it.

“But when we started harvesting, we realised it was a great crop and actually started to get excited thinking the one with more nitrogen would be even better,” says Mr Williams.

However, despite being bulkier, the more heavily fertilised crop actually yielded much less when he came to harvest it.

Without knowing the baseline nitrogen level that growers are working from, crops are likely to end up too dense.

“You have to aim for a canopy that has the size and biomass to give the right foundation for yield, and that is not so dense that sunlight can’t penetrate it.

“If you keep the canopy more open, you also avoid micro-climates that can potentially encourage disease to take hold, which then adds cost of control into the equation alongside lower yields,” she says.

30% cut in fertiliser use

At the same time as increasing his yield, getting a better handle on his nitrogen reserves allowed Mr Matthews to cut his fertiliser use by 30%, reducing costs by £40, from about £135/ha to £94/ha.

“The N-Min test highlighted just how easy it is to routinely apply too much fertiliser, which is not a great position to be in from either farm economic or environmental viewpoints.

“We now routinely carry out N-min testing across the rotation because there’s just too much risk in sticking with general assumptions and basing your applications on these,” says Mr Williams.

Last season, N-min testing also saw his winter barley yields increase by over 1.4t/ha, while his fertiliser spend also decreased, pushing his margin over fertiliser costs up by £193/ha.

Mrs Grundy says carrying out N-Min testing will be of most value where growers think they could have large reserves of N in the soil, or where they have been using a lot of organic inputs.

Equally, it would be a useful tool when growers think the soil N supply might be low, rather than using it across the whole farm as standard.

Oilseed rape is a good option at Lower House Farm, Tarporley, because of the close proximity to the crushing plant at Liverpool, but yields are held back by the farm’s sandy soils.

N-min testing has been used across the rotation for the past three years and is targeted to where Mr Briscoe suspects the soil nitrogen supply is likely to be high.

The 20ha area of Django had previously been fertilised for a high yielding wheat crop, but this did not materialise due to the drought in 2018, so much of the nitrogen remained in the soil.

An N-min sample taken in February concluded that there was 83kg/ha of N to come from the soil, with 100kg/ha of N estimated to have already been taken up by the crop.

“At the end of the day, we saved about £65/ha in fertiliser costs, achieved the same yield results as previous years and now understand a lot more about how we approach our nutrient needs moving forward,” says Mr Briscoe.