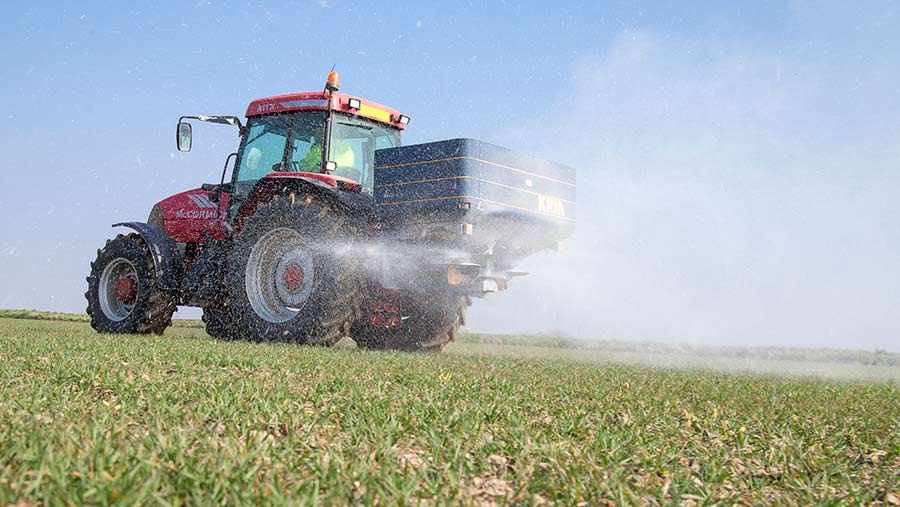 Current best-practice strategies for phosphate fertiliser use in arable crops are based on feeding the soil to feed the crop, rather than the crop.

As a result, the guidance in AHDB’s Nutrient Management Guide (RB209) is clear; maintain soil P at index 2 for most crops, check soil levels every 3-5 years and be aware that certain soils may differ in behaviour.

Going better than best practice should be the goal, believe researchers, who point out that farmers have built up a large P legacy in their soils, some of which inevitably ends up going down the drain rather than being taken up by the crop.

See also: Growers advised not to cut nitrogen on spring barley this season

This is due to both the mobility and the availability of the nutrient – two areas that the long-term collaborative research effort funded by AHDB and led by Adas has been working on.

As the current situation is creating environmental and production issues, as well as causing financial losses, there’s scope for a more efficient and sustainable strategy.

With this in mind, there are three questions that researchers are seeking answers to:

At present, 80% of UK arable land is at P index 2 or more. Unfortunately, there is a link between these levels of soil P and what turns up in water, points out Roger Sylvester-Bradley, head of crop performance at ADAS.

However, soils need to be below soil index 2 to meet the targets set by the Water Framework Directive.

“Phosphate is the predominant cause of failure when it comes to these water quality targets,” he says.

“So we need to look at ways of putting this right, without affecting yields. If we’ve got plenty of P in the ‘bank’, we may be able to use it more efficiently.”

Along with his colleagues, Prof Sylvester-Bradley has been exploring whether growers can farm at P index 1, without adversely affecting yield.

They hope to be able to come up with a feeding the crop strategy, rather than the soil approach, which can then be rolled out to growers as the understanding of soil P increases.

“At the moment, we can’t say that everyone can farm at soil P index 1. The right answer to that question is ‘not always’ – some crops respond to higher levels than index 1.”

One key challenge of the new philosophy is to increase the efficiency of P fertilisers. If soil P reserves are going to be run down to prevent environmental damage, it follows that there will be a need for fertilisers that work quickly or give a better response.

“We know from research carried out at 10 sites at soil P index 1 that some 80% of the crop’s requirements are met from soil P, with the rest coming from fertiliser,” continues Prof Sylvester-Bradley.

Of concern is the finding that the average recovery from freshly-broadcast triple super phosphate (TSP) is just 4% – not nearly high enough for farmers hoping to work at lower soil P indices.

Furthermore, economic yield responses to freshly broadcast TSP were seen in potatoes and barley, but not in wheat or oilseed rape.

In addition, placement of P fertilisers had no effect on P recovery by the crop, although it did produce yield increases in four out of ten experiments with barley and potatoes.

“With wheat and oilseed rape, yields tended to fall, so placement doesn’t appear to be the universal answer.”

Looking at different types of fresh fertiliser P, Avail-treated TSP, which is claimed to be more available to the plant, showed no consistent benefits.

Struvite, a slow release form of recycled P from sewage treatment, did show better P recovery than TSP in eight of the 10 treatments – but the only significant effects on yield were seen in potatoes.

“To keep it in perspective, recoveries were still below 10% with Struvite.”

Prof Sylvester-Bradley believes that there’s a need to improve P monitoring and a good case for measuring grain P at harvest, as it indicates whether crops got enough of the nutrient through the season as well as providing information on nutrient offtakes.

“Evidence suggests that a grain P of around 3,200mg/kg is a good working threshold, as yields stop increasing above it,” he explains.

The good news for growers is that sponsorship for a grain nutrition benchmarking survey has been secured, which will provide grain analysis free of charge to farms that can assure grain origin and provide soil analysis information (see panel).

Any new evidence on P will then be used to inform revisions of RB209.

This free service is open to all farms up until harvest 2018, with the survey first looking at cereal crops harvested in 2017.

With sponsorship from Yara and AHDB, the grain samples will be analysed for P and all other essential nutrients (with the exception of molybdenum).

To apply, growers should email yen@adas.co.uk with “GNB” in the subject line and stating the number of fields they wish to submit.

After filling in a form with field details, the labs will send labelled sample bags out to the farm, with the results from 2017 samples expected to be ready by spring 2018.

The reports will include information on how each sample compared to the total number analysed.

Struvite is a natural waste product which precipitates out of sewage sludge and animal waste.

It shows gradual nutrient release and good P availability, so is being assessed as a slow release fertiliser which would be able to reduce the farming industry’s reliance on rock phosphate.