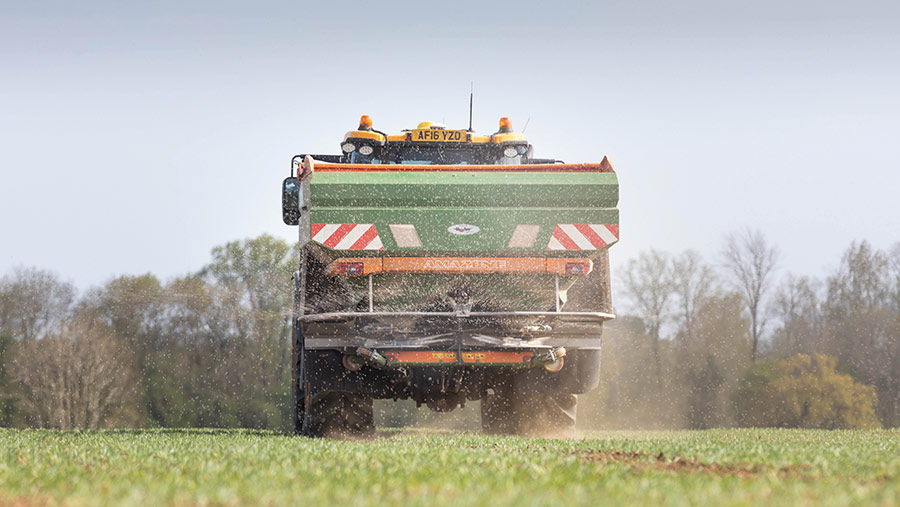 Defra’s consultation on reducing the ammonia emissions from the use of urea fertilisers has received a mixed reception from the arable farming industry, with some accusing the government department of being out of touch with current on-farm practice.

Commentators have been quick to point out that responsible use of urea products is a better solution than any of the three options proposed by Defra (see “The consultation”) and emphasise that when urea is managed correctly, emissions are minimised.

They also stress that applications of urea products are made in early spring, when soils are cold and damp and ammonium can be captured in the soil for use by the growing plants, reducing the chances of volatilisation occurring and minimising any environmental burden.

Volatilisation, which is not an issue with other forms of nitrogen fertiliser, occurs at the soil surface when ammonium from urea is converted to ammonia gas.

In certain circumstances, this gas is then lost to the atmosphere, where it has the potential to react with other pollutants and affect sensitive habitats. In high-pH soils and where temperatures are rising, more is lost.

Volatilisation losses from urea use in the UK have been calculated at 13.1% by the European Monitoring and Evaluation Programme. In contrast, losses from nitrates are 1.32%.

The Defra consultation, which was launched at the beginning of November, will run for 12 weeks until 26 January 2021.

It sets out three options as a means of tackling ammonia emissions – something that has been in the department’s sights since the government committed to the Clean Air Strategy.

The three options are:

Liquid urea is excluded from any new rules or restrictions. Farmers can get involved by taking part in the consultation.

All point to the important place urea has in the fertiliser market and highlight that should Defra decide to restrict the availability of one key nitrogen source, it would leave growers with just ammonium nitrate-based fertilisers – creating market distortion and increasing costs.

Other advantages mentioned are that urea is safer to handle than ammonium nitrate and is far less prone to leaching when it is in the soil.

It is also perceived as a more natural product and considered by some to be kinder to soil biology, as it doesn’t deliver the short, sharp shock that big pulses of nitrogen do.

However, Defra has pointed out that a ban on solid urea fertilisers – which is one of the options proposed – would achieve about 30% of the government’s ammonia reduction target, which is only one part of the Clean Air Strategy introduced at the beginning of last year.

Taking action on urea fertilisers has the potential to reduce pollution from particulates that form when ammonia reacts with other pollutants, as well as limit the damage caused to sensitive habitats and water quality through deposition and run-off, it claims.

While growers and agronomists accept that urea can degrade quickly in the right conditions, they point out that emissions are significantly reduced by targeting applications according to soil and weather conditions.

Spunhill agronomist Paul Cawood believes that on-farm practice with urea is way ahead of government policy and that the three options set out by Defra all assume that farmers don’t know what they’re doing.

“In my experience, urea fertiliser users are being more progressive,” he says.

His view is that urea is being unfairly victimised because it is poorly understood. “If you know how it works, there’s no environmental penalty from using it. Soil temperatures have to be in the region of 17C for it to volatilise.”

Fertiliser is the biggest expense on arable farms and the return from using it is significant – no one sets out to waste their money by losing it, he adds. “Ammonia lost to the air is nitrogen lost for plant growth.”

A better focus would be looking at ways of improving nitrogen use efficiency on every farm, regardless of the fertiliser type employed, using pragmatic solutions, suggests Mr Cawood.

“This is where developments such as urease inhibitors have a place. They add an element of sophistication.”

Sean Sparling, AICC chairman and Lincolnshire crop consultant, agrees that sensible use of urea-based fertilisers in cold, damp conditions is already the norm, but reports that urea use has fallen on Lincolnshire farms in the past five years.

“Urea can be a cheaper source of nitrogen, but the losses from it are much higher, and it’s impossible to know how much you are losing. Ammonium nitrate is both more efficient and more flexible,” he says.

Looking at Defra’s proposals, he is critical of the option for an outright ban. “That would be the worst outcome. If they ban its use in agriculture and are serious about emissions, then surely they will have to look at other uses, such as AdBlue in engines.”

The second option, which requires urea fertilisers to be stabilised with a urease inhibitor, is the best of the three on the table, even though it still doesn’t make them comparable with ammonium nitrate, he believes.

“Inhibitors do significantly reduce volatilisation, so if the aim is to reduce emissions, they help. We want the nitrogen fixed in the soil, not lost to the air.”

The third option, restricting the spreading of urea products to a tight 11-week window, could be problematic, he highlights.

“Farming by calendar date is never straightforward and can cause trouble. A product like urea, which is temperature and moisture dependent, doesn’t respect dates.”

Mr Sparling suggests that a combination of option two and three could work best of all – using a urease inhibitor to limit emissions and encouraging farmers to follow best practice by making applications early in the spring while it is still cold and soils are damp.

“When it warms up, growers should switch to ammonium nitrate.”

What are other countries doing?

Germany has only allowed the use of urea fertilisers stabilised with inhibitors since February 2020, while Poland has announced it will do the same in 2021.

France remains undecided and is to conduct further investigations into the safety of inhibitors, both for operators and the environment.