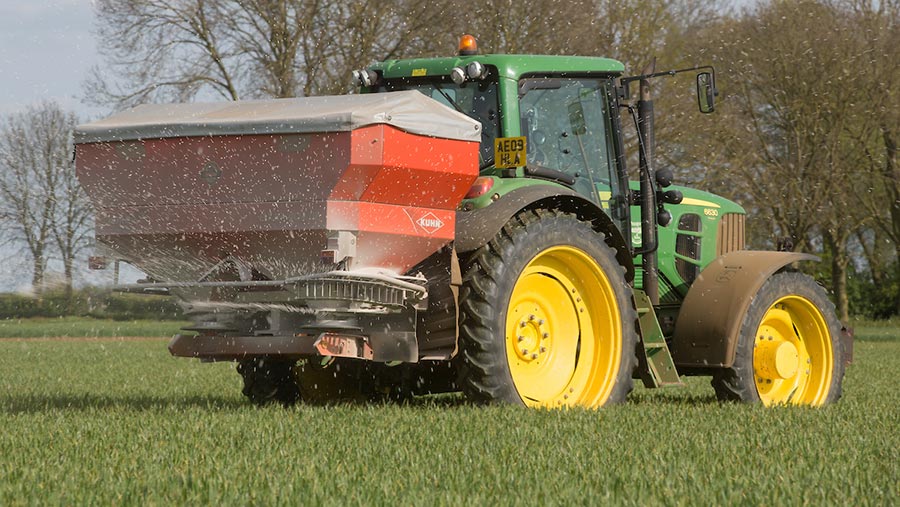 Enhanced urea fertilisers and urease additives could soon have a greater role on arable farms as the government looks to slash ammonia losses through its Clean Air Strategy.

So with 88% of ammonia emissions in the UK coming from agriculture, the spotlight is on fertiliser use.

One particular source of ammonia is from urea fertilisers when spread on arable crops, especially later in the season.

While the UK government plans to set up a working group, Calum Findlay, fertiliser manager at Gleadell, points to Germany, which has already introduced a ban on straight urea to tackle ammonia. It comes into effect in 2020.

However, Adas figures show that enhanced urea fertilisers have ammonia losses that are more comparable with ammonium nitrate.

Similarly, results from a three-year trial by government agencies in Northern Ireland and the Republic of Ireland that showed switching to NBPT reduced ammonia loss by 78% compared with urea.

These may soon be the only forms of urea that farmers can use. 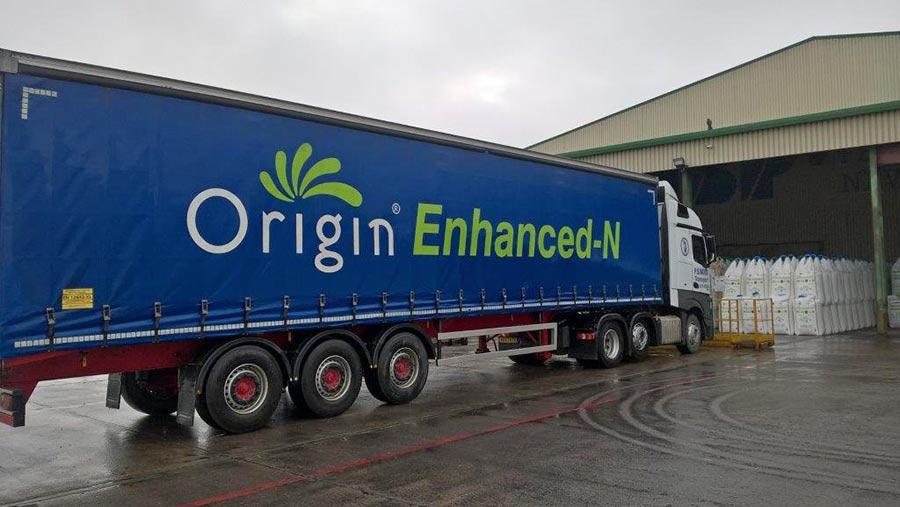 Nutrisphere is a polymer that holds more of the applied nitrogen in the ammonium form for longer. It protects the nitrogen from enzymes, thus acting as both a urease and nitrification inhibitor.

Results based on six UK trials with wheat over two seasons shows it outperformed straight urea, delivering more than 0.5t/ha in extra yield. It resulted in the same yield as wheat receiving ammonium nitrate.

In four out of five trials carried out with spring barley, Origin Enhanced Nitrogen outperformed ammonium nitrate, with an average yield of 7.9t/ha compared with 7.71t/ha.

Other claims include independent testing by Spreader Calibration Services showing that it can be spread evenly to 30m. 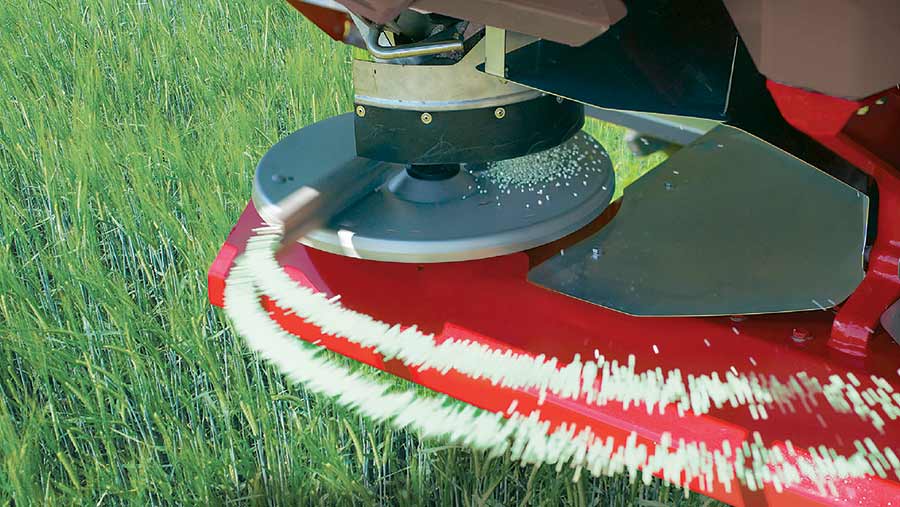 The company claims that a comprehensive series of trials in the UK show KAN performance is as good as or better than ammonium nitrate.

In wheat, one trial in Scotland showed a 3% lift in yield, and another in Suffolk gave the same yield, while increases were seen in oilseed rape (3%) and sugar beet (3t/ha adjusted yield).

With spring barley, KAN fertiliser gave a 6% increase in yield compared with ammonium nitrate when averaged across all treatments.

Other claims include independent testing by Spreader Calibration Services showing that it can be spread evenly to 30m. 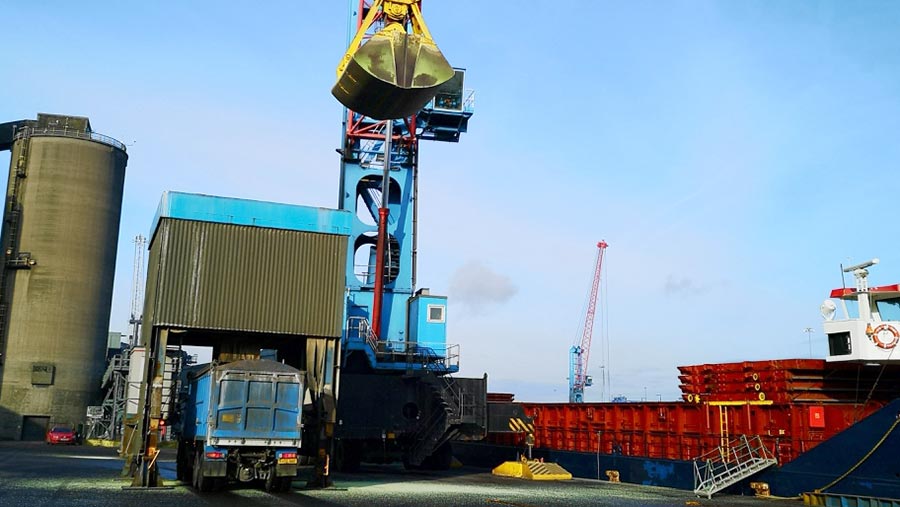 Solid urea fertiliser treated with both nitrification and urease inhibitors.

Alzon contains both an urease inhibitor and nitrification inhibitor, so is ideal for both wet and dry conditions.

According to Gleadell, the resulting improvement in nitrogen use efficiency through lower losses efficiency enables application rates to be cut without affecting crop performance.

For example, it is possible to reduce N applications on sugar beet and maize by 10-20% without any loss of yield.

Another benefit is that the slow release nature of the fertiliser means farmers can put on an early, large dose, thereby reducing the number of applications.

Also of note is that the inhibitors are added during the granulation process, which means they are incorporated throughout each granule. Gleadell says it greatly enhances the shelf life and efficacy of the fertiliser compared with those that are merely “sprayed” on.

Gleadell sees Piagram Pro as an ammonium nitrate replacer, especially during periods of dry, warm weather and later in the season. It is marketed as “the urea for problem conditions”.

“Effectively, there is no need to switch to ammonium nitrate for later dressings.”

However, there are only limited supplies in 2019 and it’s being trialled on nine farms across Lincolnshire.

Again as with Alzon, the inhibitors are added during the granulation process.

The product contains the urease inhibitor N-(n-Butyl) thiophosphoric triamide (NBPT) that stabilises the nitrogen against volatilisation.

The inhibitor keeps nitrogen in the soil for longer, avoiding the volatilisation losses seen in straight urea products. Trials have shown the inhibitor to reduce these losses to as low as 5%.

Yara says the resulting better nitrogen use efficiency results in increased yields over straight urea. Trials have shown this to be around 2%. However, the product is only available in Republic of Ireland and Northern Ireland.

This product means users of liquid fertiliser can now see the benefits that solid product users see with enhanced urea.

Frontier trials over the past two years have shown yield benefits of 0.2-0.5t/ha in a different number of crops. 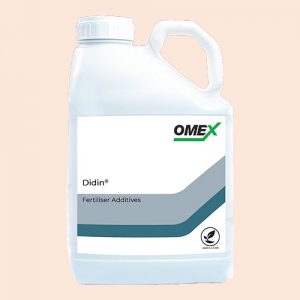 An additive containing both denitrification and urease inhibitors that farmers can add to liquid fertiliser mixes.

Omex also says the unique formulation of Didin allows growers to apply all of the nitrogen in just one dose, saving on additional application costs.

The company points to one Scottish farmer who has saved time by cutting out two applications on his cereals and oilseed rape by adding Didin, as it reduces leaching and slower release.

The nitrogen stabiliser contains a nitrification inhibitor that farmers can add to their liquid fertiliser mix or apply directly to soil using a sprayer.

N-Lock Max contains the nitrification inhibitor nitrapyrin and it works by inhibiting nitrosomonas bacteria, the bacteria responsible for converting ammonium to nitrite. It provides activity for up to 12 weeks.

A key unique feature is its versatility, as it can be applied with liquid fertilisers, slurries, digestate as well as through sprayers.

Good responses have been seen in maize trials with an average yield increase of 9%. The manufacturer explains that maize utilises most of its nitrogen 8-10 weeks after drilling and rainfall during this period can move the nutrient away from the plant roots.

Using the product helps keep nitrogen in the root zone for longer.

Responses have also been seen in winter wheat and oilseed rape, with average yield increases around 10% regularly recorded.

Agrovista also points out that it enables farmers to manage when they apply their fertiliser and reduce the number of splits to ease workloads, as it has been shown to reduce nitrate leaching by an average 16%, and nitrous oxide emissions by an average of 51%

What’s the difference between urease and nitrification inhibitors?

Nitrogen in a standard urea fertiliser has to undergo conversion to the ammonium form before plants can take it up via their roots. This is carried out by urease enzymes in the soil.

However, this process can happen rapidly under certain conditions, such as when temperatures are higher, on lighter soils and alkaline soils (pH>7.5). This can lead to significant nitrogen losses through volatilisation as ammonia.

Urease inhibitors work by slowing this process down and, for example, 2-NPT in Alzon slows down this process by one to two weeks. The ammonium formed can therefore bind to soil particles more easily.

Another key process in soil that can lead to N losses is the conversion of ammonium to more mobile, leachable forms of nitrogen, such as nitrates and nitrites.

The addition of a nitrification inhibitor delays the conversion by six to 10 weeks.

In terms of tackling ammonia losses, Gleadell’s Calum Findlay says urease inhibitors are the key, especially for later applications when there is a higher risk of volatilisation.

While nitrification inhibitors don’t reduce ammonia losses, they are useful for where there is a risk of leaching, such as early in the season.