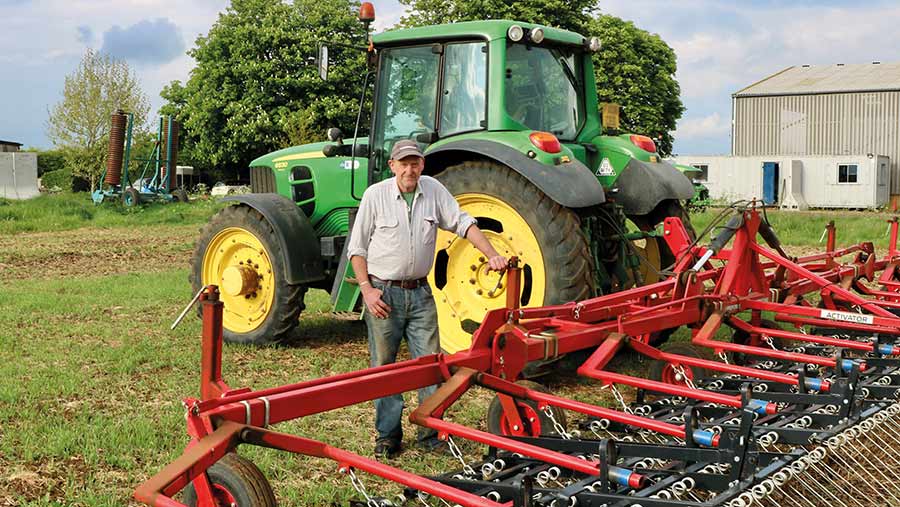 Most farmers would like to reduce inputs, especially considering current prices, but Lincolnshire grower John Charity has gone much further than most would ever consider this season.

He points to a number of factors that has led him down a path where, so far, he has spent a maximum of just £250/ha on his wheat, which includes no in-crop herbicides, just one fungicide and 42kg/ha nitrogen.

See also: Soil carbon: Targets and how to store it in arable fields

In early May, much of Mr Charity’s first wheat, all following peas or beans, was still waiting for a first application of nitrogen fertiliser. That wasn’t exactly planned, he says.

“I bought fertiliser in anticipation of putting it on all the wheats, but then it turned dry, and I decided not to apply it until it rained.”

That rain didn’t arrive until early May, when he applied 42kg N/ha to parts of fields with lower blackgrass numbers.

Second wheats received an earlier nitrogen application as he knew the soil would have less residual nitrogen.

Two seasons ago he cut nitrogen use by 10%, and then by another 25% last season for a total of about 85kg N/ha.

“I know we did cut too far, as we struggled to get 11% protein on the milling wheats,” he says.

But that knowledge hasn’t stopped him going even further this season.

2. Getting off the input treadmill

Trying to get off the input treadmill is another factor behind Mr Charity’s radical tactics this season.

“I’ve gone off the idea of using inputs because it just seems like a vicious circle – the more you put on, the more you have to put on.”

For example, nitrogen will drive disease, as well as crop growth, increasing the need for fungicides during the season, he says.

Before he started direct-drilling with a 3m SimTech T-Sem three seasons ago, he was pushing wheat crops harder, typically with three fungicide sprays.

This season, the only application has been a tebuconazole + Librax (metconazole + fluxapyroxad) spray where yellow rust was coming into Skyfall in late April.

“I’m hoping that will be all it needs,” he says.

He is trying to reduce his disease risk by growing blends on about half his wheat area.

This year’s blend of Skyfall, Illustrious and the spring wheat Lennox so far appears to have much less yellow rust infection than Skyfall, he says.

“The blend has hardly any disease compared with the individual varieties, so it does seem to be helping me.”

An even bigger concern is that nitrogen will make his already problematic blackgrass situation worse on the approximately 50% of the farm that is infested. “It’s mostly in the wet holes.”

Walking into fields with blackgrass, it is clear that while population levels are reasonably high in plant numbers, most only have one to two tillers where nitrogen has not been applied, and heading is below the canopy.

“It doesn’t look as if it is competing with the crop too much,” he says. 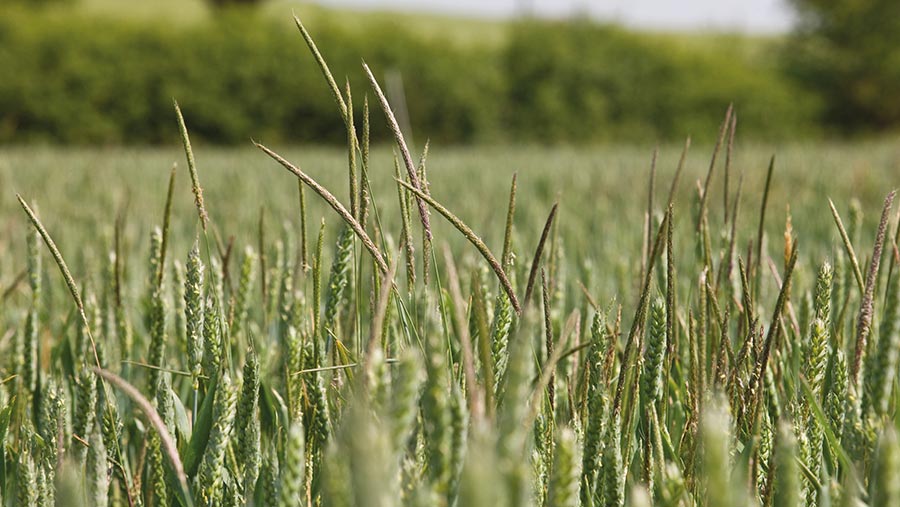 Control has been limited this season to pre-drilling glyphosate applications and multiple passes with a 12m ProForge Activator weeder/harrow.

First passes with the rake in some wheat crops were in January – helped by the dry weather.

“It needs to be dry – but also have enough moisture to loosen the soil – to be effective.” In some wheat crops he has made five passes, while others have required fewer.

He can cover about 4ha/hour with the rake, using just 6 litres of diesel.

“It takes a fair percentage of the blackgrass out and seems to weaken the rest – it doesn’t have much root, which might be another reason why it doesn’t tiller that much.”

The rake is a cheaper option – costing just over £9,000 – than an inter-row hoe, albeit probably less effective.

“Inter-row hoeing is more technology. I would need proper camera guidance and wider rows, so possibly a wider drill, although I might be able to take some tines out of the T-Sem. This way I’m doing it on the cheap.”

No pre-emergence herbicides have been applied to wheat for the past two seasons.

“My agronomist thinks I’ve lost the plot,” he admits. “I’m not convinced that these pre-emergence stacks are not harming the crop and the soil biology.”

That said, he thinks next year he will go back to doing a basic pre-emergence spray, which he hopes might be more effective after four years in some crops – two wheats and two spring crops – of not using a flufenacet-based product.

Part of the reason why he has chosen to go very minimalistic on weed control this season is that he has signed up to be in the Sustainable Farm Incentive pilot scheme.

About 10% of the 120ha farm will be taken out of production within an advanced arable land standard, with a fair chunk destined for two-year legume fallows in a longer-term plan to help manage blackgrass.

“The blackgrass is in patches, so by not putting any herbicides on, the worst areas will show up, and I’ll put those into the pilot,” he explains.

“I like that you can move the legume fallows around, so I’m hoping we can use them to get on top of the blackgrass.”

While chemical inputs have been cut to the bone, Mr Charity has been using various biological products sourced via Soil Fertility Services and applied by a contractor through Allen Agriculture.

One product being applied is Bio-N (Bacillus subtilis), which contains a collection of nitrogen-fixing bacteria to convert atmospheric nitrogen and N from organic matter into readily available ammonium for the crop.

Applying synthetic nitrogen reduces the plant’s need to look for natural sources of N, he suggests.

“Putting both biostimulants and artificial N on together could be defeating the object and fighting each other, so my view was to go the whole hog. This year’s experimentation will show whether that works.”

Assuming his inputs don’t increase much in the rest of the season, Mr Charity suggests, including rent and machinery costs, he needs his wheat to average more than 5 t/ha to be profitable.

Last year’s winter wheat averaged 6.9 t/ha with slightly higher nitrogen while this year’s has more biostimulants, he says. In the past, when growing more conventionally he has achieved up to 10t/ha.

“But that’s only one year in four at best.”

Even in a season where he pushes his low-input system a bit harder with around 80kg N/ha, one fungicide, one herbicide and four passes of his weeder, which would push his costs up to £420/ha, he suggests his cost/t to grow winter wheat would be comparable to a higher input system.

“If I can reach 7t/ha my cost/t would work out to be £60/t. Standard practice based on fertiliser at £600/t and up to six applications of fungicides and herbicides costing £300/ha would require a yield of 10t/ha to equal my system.

“Even at 5t/ha I would stand to lose less in today’s climate of volatile prices and weather. But there are so many variables in farming and no one system will fit every farm – if you have good land, it makes sense to push for yield.”

Six species of cover crops are now grown before each, with the sheep flock of his son, Lance, used to graze them over winter.

The Dorsets lamb in September, which means the sheep weigh about 30kg – rather than 80kg – when grazing, making poaching less likely.

“Last year they were gaining 300g/day, which is perfect, as I sell into the prime-time market in February at the right weight.”

The farm also has access to about 200-300t of horse muck, and has in the past used straw-for-muck deals to add other forms or organic matter back in to the soil.