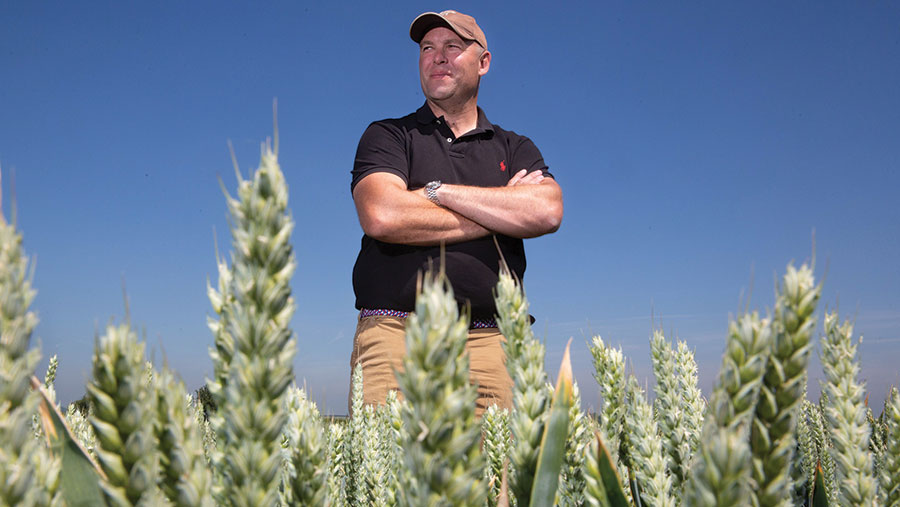 A fungicide programme tailored to the season gave the best wheat yield response and the highest margin in an on-farm trial conducted by Cambridgeshire grower Russell McKenzie last year.

In a growing season which started off dry before rain arrived in June, it was the right year for showing that it’s possible to retrieve yield later on. And responding to the conditions is important, even further into the growing season, he believes.

Surprisingly, use of an SDHI at T3, which followed a T1/T2 programme based on an azole/strobilurin mix plus chlorothalonil, came out on top with an average 4.93t/ha yield response, producing a £614/ha margin over costs.

“With any fungicide programme, there’s always an element of guessing what’s going to happen with the weather,” says Mr McKenzie.

“What was obvious from our trial in 2019 is that we need to maintain some flexibility in order to deal with increasingly unpredictable weather.”

With the help of BASF, he took the opportunity to compare seven different input programmes – untreated plots plus six different treatments. These included a nutrition-only based programme, as well as one without an SDHI component at T1 and T2 and three with the leading manufacturer options of two SDHIs used at T1 and T2.

The sixth and final choice was the best performing – holding back the SDHI component until T3 and using azole and strobilurin chemistry at T1 and T2, along with multisite chlorothalonil.

While septoria pressure was initially low, yellow rust came in early, with some of the 11 varieties in the trial showing early signs of infection.

“Some varieties expressed high levels of infection early on, but it was interesting to see how adult plant resistance kicked in later on in the growing season,” he recalls.

“Skyscraper, which we grow on the farm, wasn’t one of those initially infected.

“Wasabi was one of the worst infected early, around growth stage 30-32, but amazingly it was virtually clean of yellow rust by GS39. Yellow rust is such a dynamic situation and doesn’t seem to obey the resistance-rating rules, so it was good to see resistance still working.”

“Barrel was a real surprise as it has one of the lowest septoria resistance ratings on the AHDB Recommended List at 4.3, but it reflects the season and early dominance of yellow rust.”

Where a nutrition programme was used instead of fungicides, there were big differences between varietal responses.

While Spotlight showed no response to the programme, Firefly gave a 0.88t/ha response. In general, the less resistant varieties responded more.

“Overall the nutrition programme didn’t do as well as we had hoped. Bear in mind that it had a total cost of £74/ha.”

His reason for testing a nutrition approach was to get a better understanding of the potential of products such as Biotrac, an algae-based biostimulant, and their place in a programme.

Whether they work, when they should be applied and how they might help alleviate stress were all under scrutiny, but the 2019 results were inconclusive.

Having no SDHI chemistry in the programme gave an average response of 3.49t/ha – a bit higher than the 3.17t/ha response achieved when SDHIs were used at T1 and T2. This may have been a reversed result if septoria was present earlier.

“It was the right year for it, as disease pressure was low for most of the season,” says Mr McKenzie.

“In the trial, all three SDHI options at T1 and T2 were trialled from the three leading manufacturers, but there wasn’t really a huge difference between them.”

Again, varietal differences were seen, with the dirtier varieties such as Gravity and Kerrin giving responses of more than 5t/ha.

“Even Extase gave a 2t/ha response, which was far higher than we had anticipated.”

In the best performing programme, holding back the SDHI until T3 (following a non-SDHI programme at T1 and T2), when Librax was applied, gave an average response of 1.43t/ha from that application alone, he reveals.

Those plots also remained greener throughout the trial.

“Where there’s rainfall in June, it would seem to work well. I just wish I’d been brave enough to use the same approach on our commercial crops.”

Variety responses to this T3 approach were analysed, which showed that it was a rust-dominated result, with huge responses from some varieties compared with their untreated yields.

More significantly, the top end treated yield of all the varieties was relatively close.

For Mr McKenzie, this clearly demonstrated that although there is a wide spread of response levels, even the cleaner varieties respond significantly to a well-balanced fungicide programme.

“Reducing the risk with a cleaner variety that may be a few percentage points down on yield on paper doesn’t always lead to significantly different yields on farm.”

The need for realistic and relevant data on which to base future decisions is behind the on-farm trials being conducted by Russell McKenzie.

Faced with continual changes to the fungicide line-up and the steady arrival of new varieties, he is investigating how both can be put to best use on his farm in the most cost-effective way.

“Having data from our own farm is invaluable and will become even more important,” he says. “The results from 2019 threw up a few surprises and made me realise that I should have been brave enough to trust my instincts more.”

Last year he set out to investigate the contribution of varietal resistance and nutrition to disease control, as well as comparing different fungicide programmes alongside an approach that was tailored to the season.

This year, he is hoping to repeat some of the work, but on wheat drilled much later at the beginning of February.

“That’s new territory for me,” he says. “But it could be very useful. All of our commercial crops are behind where we would like them to be, so gathering knowledge on the best way to manage them seems sensible.

“Perhaps nutrition and biostimulants will play a greater role this year.”