Companion cropping is helping to offset some of the risks associated with growing 120ha of winter oilseed rape on a Worcestershire farming estate.

At the same time, it is supporting the 1,500ha farm’s ongoing commitment to soil health and adding some resilience into the system, while helping to support a sustainable rotation and reduce the need for crop inputs.

With the technique now in its third year at Overbury Enterprises, near Tewkesbury, farm manager Jake Freestone says he started to look at its potential when the neonicotinoid seed treatments were banned and he had to look at different ways of growing rape.

“It was partly about dealing with an increased risk from cabbage stem flea beetle, but also about soil health,” he explains.

“As a predominantly no-till farm, we are looking to bring benefits to soil structure and fertility in all of our actions and operations.” 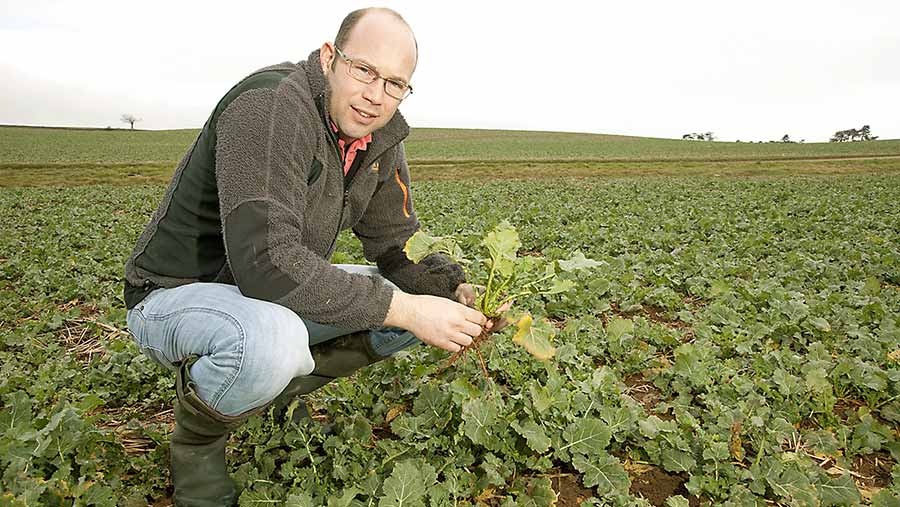 One issue he hoped to overcome with companion cropping was the fact oilseed rape doesn’t host any mycorrhizal fungi, so existing soil fungi populations are starved for the year the crop is being grown in the rotation.

“Having promoted these fungi by moving to no-till and encouraging the symbiotic relationship between them and plant roots, it makes sense to look after them,” points out Mr Freestone.

“Companion plants, which grow down the rows with the rape, can fulfil that function.”

In the first year, having taken advice from Nuffield scholar and Kent farmer Andy Howard, he used a vetch and buckwheat mix as the companion crop, drilling it at the same time as the oilseed rape crop in mid-August.

At a seed rate of 12kg/ha of vetch and 7kg/ha of buckwheat, it grew very well. 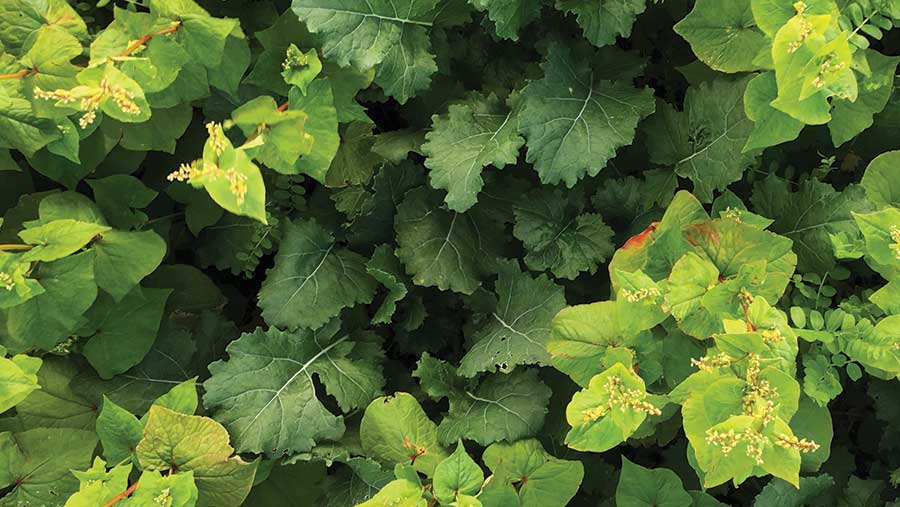 “It wasn’t a particularly fast-growing season, so both species flourished but didn’t outcompete the rape,” Mr Freestone recalls.

In the second year, he trimmed the seed rates back a bit to 10kg/ha and 5kg/ha, respectively, with the crop taking very well and giving him some concerns about any possible competitive effects on the rape it was growing with.

However, having a shoot on the estate forced some changes for this year’s companion crop species mix, with the buckwheat being dropped in favour of 2kg/ha of crimson clover, to prevent pheasants taking refuge in the vigorous cover.

“It is all drilled in one go with the rape, using different hoppers, and with slug pellets and fertiliser also going on at the same time in one pass,” explains Mr Freestone. “It’s a quick and simple operation.”

Vetch, which develops very rapidly, produces active nodules within six weeks, which means the nitrogen is recycled and made available for the oilseed rape in the spring, after the companion crop has been destroyed.

As a result, the use of bagged nitrogen has been reduced by 10%, which gives Mr Freestone an idea of the nutrient contribution made by the vetch.

“We are also putting an active carbon source, molasses, in with the liquid fertiliser, which helps the soil microbiology use the fertiliser more effectively.”

He does the same with every pesticide application, as he looks for ways to reduce the farm’s spend on agrochemicals. 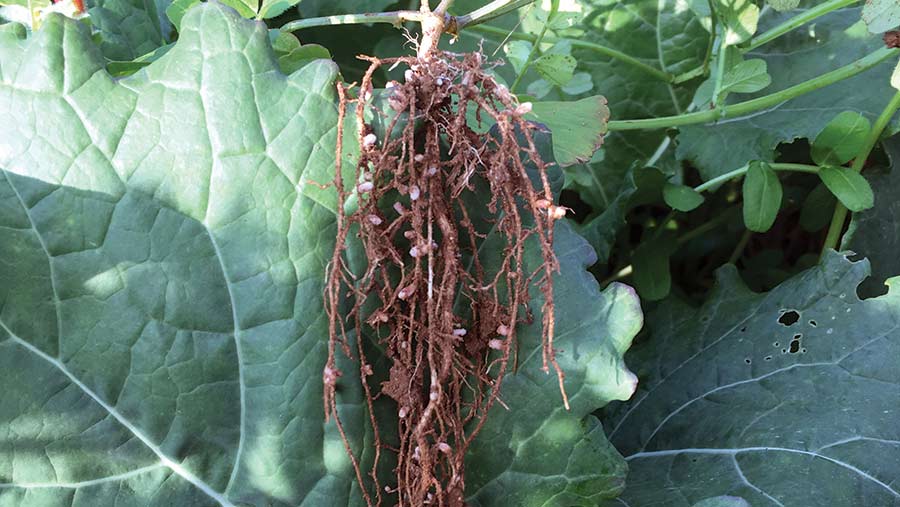 An application of Astrokerb (aminopyralid + propyzamide) in late winter is used to destroy the companion plants, although the buckwheat component was always killed by frost.

“It’s the only broad-leaved weed herbicide we use in the rape and we are going in then anyway for grassweed control,” he adds.

“The weed suppressing effects of a companion crop means it doesn’t need a pre-emergence herbicide, which has been a saving.”

The companion crop seed cost is £32/ha, which is just below the cost of a pre-emergence herbicide, he calculates.

Having more diversity in the field seems to have helped reduce cabbage stem flea beetle feeding damage, which could be due to the pest being confused by the other plants or the rape crop is disguised in some way. 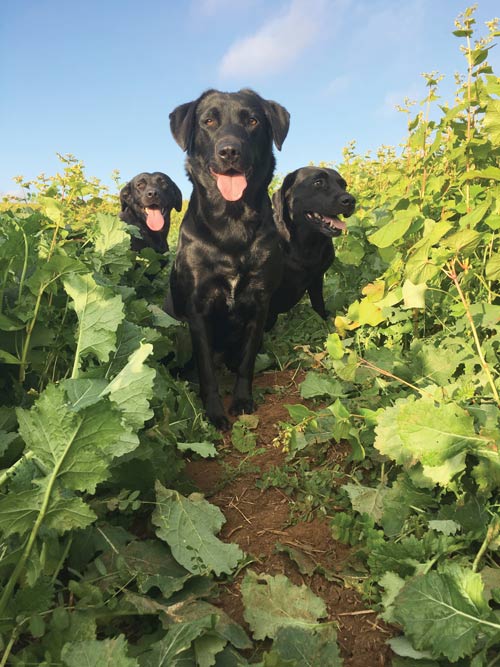 “Either way, they’re not feeding on the rape like they were. We haven’t had to put any insecticide on the crop.”

Mr Freestone has used the companion cropping technique with both conventional and hybrid oilseed rape, with equal success, and has even done a split field trial to check there were no detrimental effects on yield.

“There aren’t any downsides that we have encountered,” he says.

“It is helping with one of our overall aims of reducing our agrochemical use and it is maintaining our soil fungi populations. Last year’s lift in yields is a good indicator.”

Looking ahead, he is interested in other oilseed rape growers’ experiences with different companion plants, such as spring beans, and is keen to extend the concept to other crops and put another species in with his wheat.

He has tried having an understorey of white clover in the rotation, with it established and growing in with beans, followed by wheat and then barley.

“The clover grew fine, but it didn’t give us any savings in fertiliser and herbicide.”

What is companion cropping? 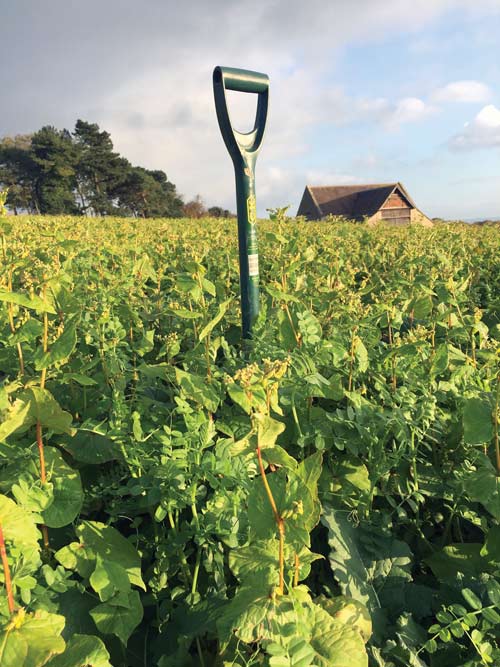 Companion cropping is the practice of growing two or more plant species in the same field at the same time.

While it can include practices such as intercropping, undersowing, relay and pasture cropping, the technique described above results in only one of the plant species being harvested.

In France, a yield benefit of 0.3t/ha was recorded by seed merchant and distributor Jouffray-Drillaud, when a mix of two vetch species and berseem clover was grown alongside winter oilseed rape.

The same French work also suggested nitrogen applications can be reduced by 30kg/ha where companion planting is being used.

Other benefits recorded by the trial were reduced insecticide use, weed suppression and improved soil structure.