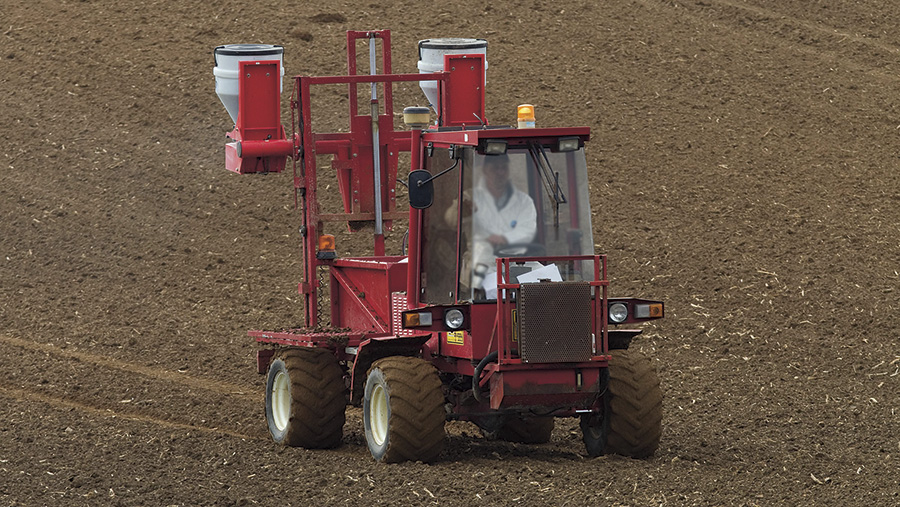 Joint farming and water industry efforts to bring the levels of metaldehyde found in water down to strict European standards are at last showing some positive results.

But even more co-operation is needed if the voluntary approach is to succeed by March 2017.

This is when Defra will decide whether the catchment management method that’s been taken for the past few years is working, or if there is a need for some sort of a ban on metaldehyde use.

The active ingredient found in most slug pellets is under threat in areas which have been identified as important for drinking water abstraction.

For example, those in close proximity to reservoirs and certain rivers, following its detection at times of peak use and high rainfall.

Its uncertain future is partly due to the fact that removal of metaldehyde with existing water treatment processes that are able to deal with other pesticides is not possible, making it essential to find more sustainable ways of protecting water supplies.

Measures on the table include dilution, product substitution, smart abstraction, financial compensation and risk mapping, as the water companies strive to meet their legal requirements.

Everything is being considered, as efforts are made to find a mutually beneficial solution for both industries. 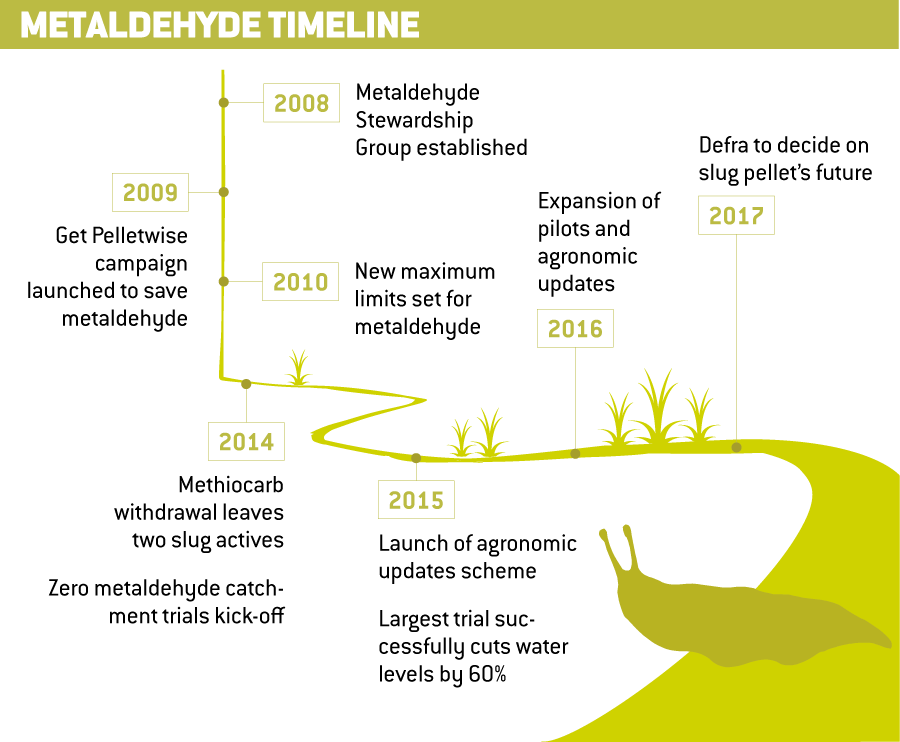 And there have been some successes.

After a trial last year, a 60% drop in levels of the chemical detected in reservoir tributaries was recorded by Anglian Water, following the largest ever metaldehyde-free farming initiative.

Growers within the natural catchments of six reservoirs in Northamptonshire, Suffolk, Essex and Cambridgeshire – who together farmed more than 7,000ha – agreed to use the only alternative to metaldehyde, ferric phosphate, for slug control.

In the first year, some 89 farmers signed up, taking an estimated 1,613kg of metaldehyde out of the landscape. As well as a 60% fall in the average levels of the active in reservoir tributaries across all of the catchments, there was a 26% reduction in the average peak levels detected within the reservoirs.

This year, the campaign is being extended to include Rutland – the largest natural catchment in the UK – effectively doubling the trial’s area.

As Lucinda Gilfoyle, catchment strategy manager for Anglian Water explains, having the co-operation of farmers is helping to build a valuable picture of pesticide movement, as well as showing that metaldehyde alternatives do work in the battle against slugs.

“Extending the trial for a second year, and expanding it to include Rutland, will allow us to verify our findings over a larger farmed area and help us to identify the package of measures needed.

“Both the water and the farming industries are faced with this problem, so working together is the best way of tackling it.”

She acknowledges that a more detailed and longer-term strategy would also have to take account of non-agricultural and domestic use of metaldehyde – something which is yet to be tackled.

Otherwise, the advice on pellet use this autumn remains unchanged, with growers being urged to consider soil, slope and stream before making any decisions on metaldehyde use.

As the active ingredient’s primary route to water is through the soil profile, the field’s topography, soil type and proximity to a watercourse are all key to whether metaldehyde could reach the water supply.

Land risk should also be assessed – if the relevant fields are in a safeguard zone and there have been metaldehyde exceedances in the past, then there’s a greater risk that it could happen again.

Other guidance includes not applying pellets within 6m of a watercourse, or when heavy rain is forecast and if drains are flowing.

Finally, there is a maximum total amount of 700g/ha of metaldehyde that can be applied in a calendar year, with a maximum application rate of 210g/ha and a 210g/ha total limit in the peak season from August –December. 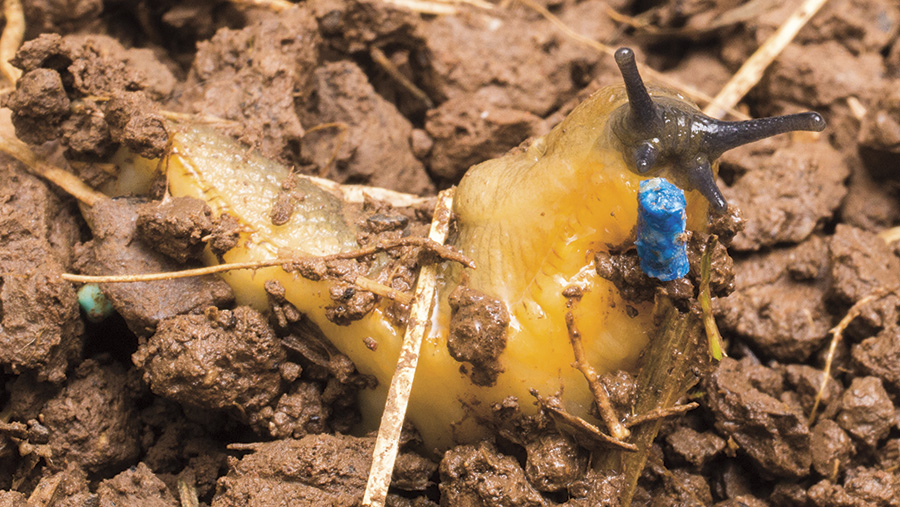 Designed to help farmers prevent key active ingredients from entering and polluting raw water supplies, the app assimilates soil type and soil-moisture-deficit information together with the weather forecast, before using a traffic light system to warn of any likely issues.

The #SlugAware feature gives growers a low, medium or high threat of slug activity based on the land’s specific condition in any given 24-72 hour period.

“It should be used in conjunction with other measures, such as the Metaldehyde Stewardship Group’s advice on pellet use, so that we are seen to be doing everything we can to protect our water resources and preserve our active ingredients.”

The WaterAware app is free to download and use.

Agronomists have been signing up to the Get Pelletwise Agronomic Updates system, so that water companies are kept up-to-date with the latest activity and conditions from the field.

Already live for the 2016 season, the system involves submitting short weekly reports online, so the information can be used to help with the decisions surrounding smart abstraction from rivers feeding into reservoirs, in high risk periods.

As Simon McMunn of the Metaldehyde Stewardship Group explains, the online feedback includes local soil conditions, progress of drilling and crop growth, as well as reporting any metaldehyde treatments that have already been made and those that are planned imminently.

“The reports are then sent to water companies so that they can use the information to decide whether or not there is likely to be high concentrations of metaldehyde coming down the river.

“If this is the case, abstraction can be halted to ensure that the water is not used for drinking.”

The more agronomists that sign up the better, he adds. “Last year’s pilot showed what a huge appetite there is for adviser engagement.

“Water companies really need this information, so that they can deliver on their legal obligations.”

This year, there are already double the number of agronomists committed to the scheme, with more than 60 having registered, he reveals.

“But there’s still scope for more support, as a number of water companies will be practising smart abstraction in the autumn.”

Slug pressure is likely to be very high, he warns.

“The warm, wet conditions which followed a very mild winter were all in the slug’s favour. Growers have been reporting high numbers all year.”

Dinah Hillier of Thames Water says that the reports received last year were very useful, as there is no other way of measuring metaldehyde levels in a practical timeframe.

“Knowing whether to halt abstraction is very difficult, as it takes between two days and two weeks to get results from monitoring – which means the information is out-of-date by the time we get it.”

Having intelligence on when metaldehyde is being applied makes all the difference, she adds.

“That information can then be used in the critical September to December period.

“If we know that there is not much metaldehyde being applied, or that slug numbers aren’t causing any crop damage, we can continue abstracting.”

The March 2018 date is very important, she stresses. “That’s judgement day. There is only one winter left for us to be able to demonstrate that there are effective measures that can be put in place which will keep metaldehyde out of water.”