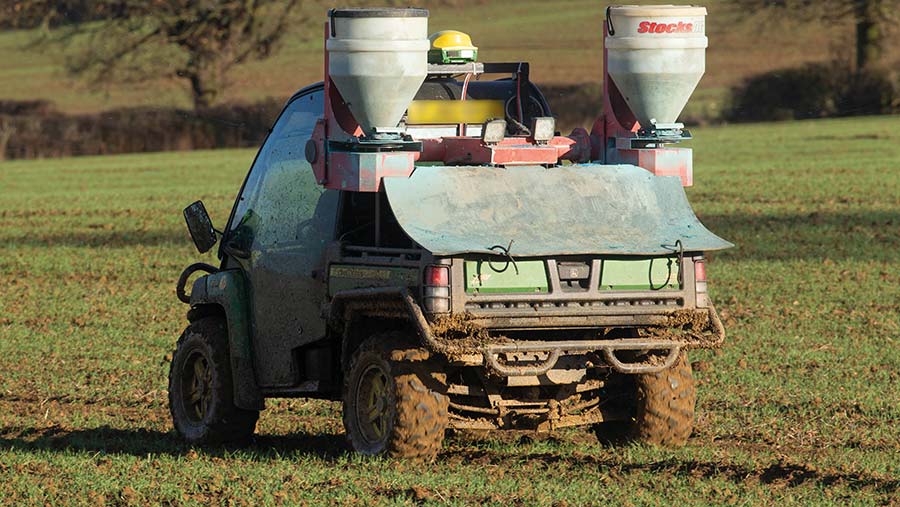 The withdrawal of metaldehyde means growers will soon only have ferric phosphate slug pellets to count on when managing this devastating pest.

However, there are a number of myths on using ferric phosphate, which may hamper farmer efforts to stop the pest decimating crops.

The slug pellet is purely a vehicle for getting the active ingredient into the slug, with the bait needing to be palatable enough to ensure each animal eats enough to deliver a lethal dose.

This saw almost all major manufacturers offer a premium wet processed metaldehyde pellet made from durum wheat flour (essentially pasta!) that hit the mark for palatability.

These premium pellets also had the added bonus of durability in wet conditions and consistency in both size and spreadability.

For a long period, only Certis offered a pasta-based ferric phosphate pellet of similar ilk in Sluxx HP.

However, now metaldehyde has been withdrawn, other players have entered the top end of the ferric market, including Adama’s Gusto Iron and Ironmax Pro from De Sangosse.

There are some differences between these premium pellets, in terms of additives that are claimed to improve control.

Attractants that are claimed to contain a substance that draws slugs to the pellet are one such additive, but Newcastle University’s slug expert Gordon Port has debunked the theory surrounding attractants.

“We have not seen evidence of any commercial pellet acting like an attractant and by that, I mean the pest can sniff them out from a distance and then move towards them.

“They are random feeders and if they do bump into a pellet, feeding quality is more important. If it’s good, they will continue eating to consume an adequate dose. Some poorer quality pellets will see them turn away,” he explains. 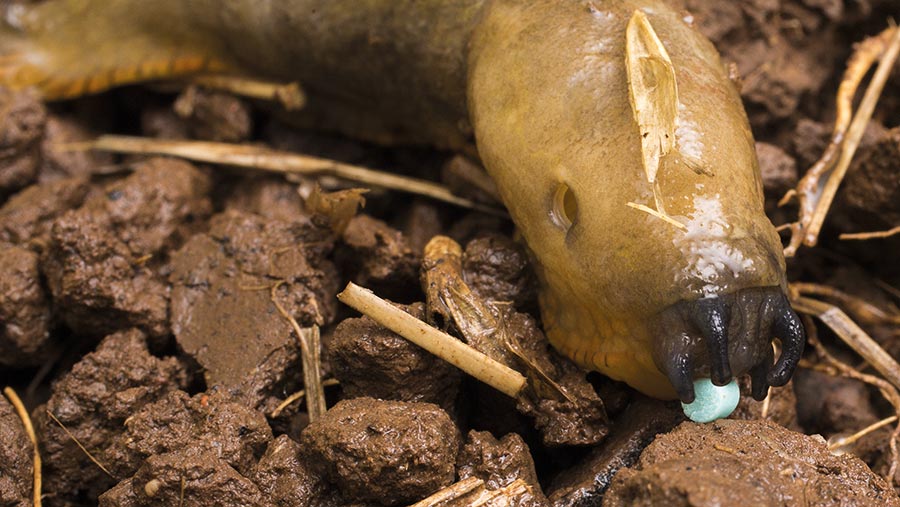 Some ferric phosphate pellets contain a higher loading of active, which is claimed to be more lethal.

However, as an active substance, ferric phosphate is relatively harmless to slugs because it is not readily absorbed into the gut.

This phenomenon is overcome by adding a chelating agent, which is an essential ingredient in ensuring enough ferric phosphate is absorbed into the slug’s system.

Most pellets contain chelating agent EDTA. However, Sluxx HP and associated brands from Certis contain EDDS, which works in the same way, but is less readily leached from pellets in wet conditions.

The firm claims that this has been proven in independent trials carried out by i2L Research in Newcastle, with EDDS-based pellets giving a much longer period of efficacy post-application than EDTA alternatives.

Certis technical expert Harry Raley says you can put any of the premium ferric phosphate pellets on the soil surface and they will be good enough to last structurally in wet conditions, but the chelating agent is leaching out all the time.

“To the naked eye, you still see bait on the surface, but because the chelating agent has been lost, the ferric phosphate that remains within the pellet will be ineffective when consumed by the slug.

“Sluxx HP has the build quality to last on the soil surface, but also the chemistry to ensure its efficacy lasts as long as its integrity,” he explains.

Myth 3: Pre-drilling or ‘down the spout’ applications are justified

Some ferric phosphate product labels – like metaldehyde labels before them – allow pellets to be applied before crop emergence, but after seed-bed preparation is complete.

This practice essentially aims to reduce the number of slugs in the soil profile before the crop is established.

Some growers are also applying pellets in-furrow with seed to prevent seed hollowing, something that many believed was reduced by using a Deter (clothianidin) seed treatment.

On the first tactic, Dr Port says this is waste of time applying before drilling, as a recently published piece of work carried out by himself and others at Newcastle University has discovered.

They monitored plots with restricted and open access to slugs over a 32-month period, enabling a comparison between the importance of migration from adjacent areas and the soil profile below the plots.

It was found that for the grey field slug, Deroceras reticulatum, which is the most important species in cereal and oilseed rape crops, a large proportion of immigration came from below.

“Within two weeks of putting on a treatment, the slug numbers bounce back to where they were before, so the best time to broadcast slug pellets is as close to when you expect damage – at or soon after drilling,” explains Dr Port.

For “down the spout” applications, Dr Port says the evidence he’s seen in his own experiments – published in the paper Behaviour of Deroceras reticulatum in response to broadcast, drilled and soil contaminated molluscicide pellets – suggests pellets are less effective when placed with seed.

This is because when most species are active, they move around on the soil surface before they might dive down to find grain, so contact between bait and slug is higher when pellets are broadcast applications at or soon after drilling. 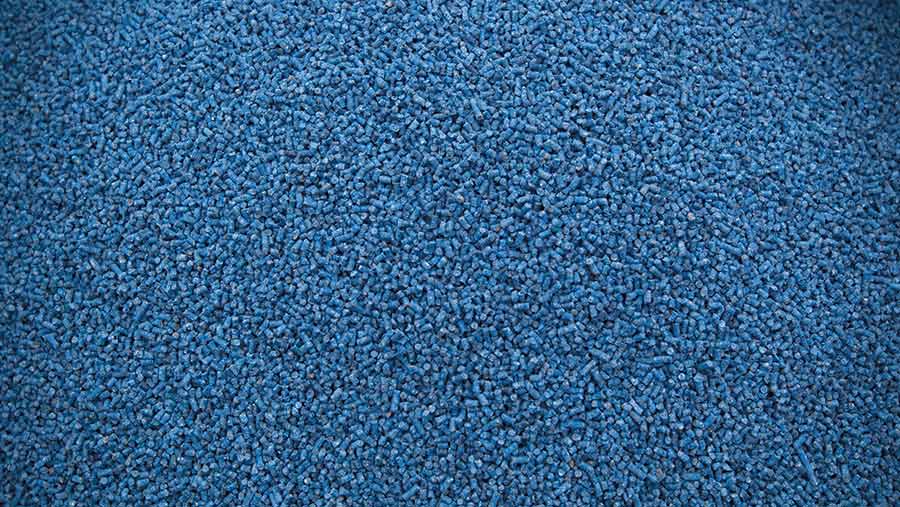 There has historically been a vast range of slug pellets available in all shapes, sizes and densities, from the light and brittle dry processed types to the heavier, denser premium pasta-based pellets.

Some formulations are classed as “mini” pellets, such as the popular Gusto metaldehyde bait (which is now rebranded by Adama as ferric phosphate product Gusto Iron) and Menorexx from Certis, which is a compact version of Sluxx HP.

The spreadability of different pellets does vary, with dry-processed products generally less consistent in size and density, so they spread less well.

It has been claimed that a larger, heavier, wet-processed pellet will spread more consistently at greater distances than smaller pellets with a similar bulk density.

However, this has proven to be untrue by testing carried out by SCS Spreader and Sprayer Testing.

The Staffordshire-based application specialist showed that with a Stocks Ag Fanjet Duo set up and calibrated correctly, mini pellet Menorexx spreads as accurately to 24m as a standard-sized pellet.

Despite premium pasta-based pellets of both small and large sizes spreading equally well to 24m, SCS’s Charlotte Foxall warns that there are limits to how far you can throw a light object, particularly when environmental factors like wind come into the equation.

She says that as sprayers get wider, growers are looking to 36m or even 40m, but accuracy can be compromised.

“A couple of disc applicators will spread wider than 24m, with the Stocks AG Twin PLUS going to 30m and the Duo PLUS to 36m.

“However, most of our customers applying pellets across 36m tend to go for a pneumatic drop and broadcast applicator – like those used to spread Avadex (tri-allate) granules – fitted across the boom,” she adds.

Whichever pellet is used, Ms Foxall says knowing the ballistic properties of each pellet and how to set up and calibrate the machine for each is critical to accurate application.

Most pellet and applicator manufacturers will be able to provide the relevant information for in-season setup, with manufacturer Certis even offering a mobile-friendly Calibration Wizard online tool that gives correct settings based on machine, spread width, product and application rate.

Companies like SCS provide tray testing and calibration of pellet applicators and this process is recommended annually ahead of the farm’s main use period and when switching between products with different ballistic properties.