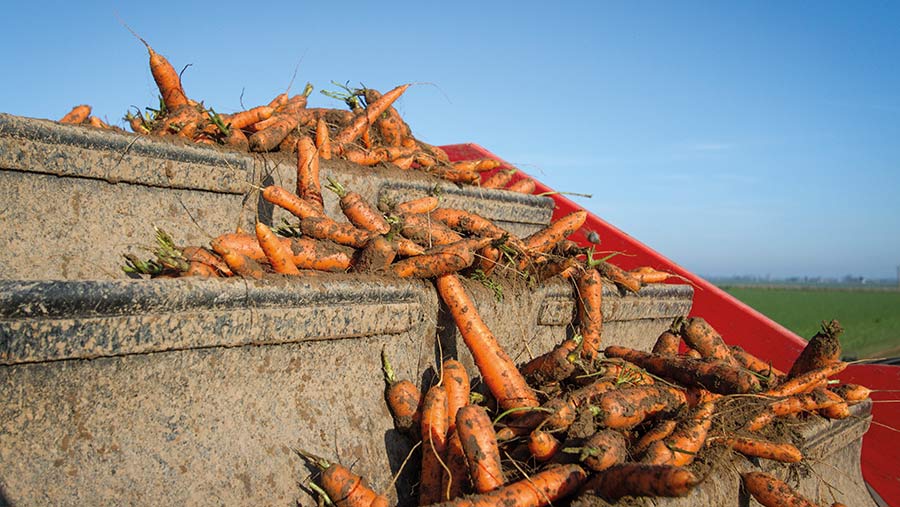 The control of free-living and root-knot nematodes is a problem for many vegetable growers, particularly as the mainstay nematicide Vydate (oxamyl) was withdrawn from use last December.

Despite its loss, a fully registered, granular nematicide formulated from garlic is proving effective in reducing nematode populations on one Yorkshire farm.

Left untreated, the soil-borne microscopic pest feeds directly on crop roots, which distorts and disfigures the root known as “fanging”. This can lead to marketable yield losses of 30-40%, as crops fail to meet tight supermarket quality specifications.

Even with nematicide treatments, carrots can still experience marketable yield losses of 5% and parsnips 8%, so keeping on top of root defects by preventing nematode build-up is important.

The granular product, Nemguard DE, contains 450g/kg of active ingredient and is based on modified garlic extracts, which contain polysulphide chains.

Developed by chemical manufacturer Certis, and approved for organic use, the formula interferes with the nematode’s biochemical processes, causing it to die. This contrasts with Vydate, which only ever stunted the pest.

Specialist root crop grower MH Poskitt, based in the East Riding of Yorkshire, is one family farming business with particularly good experience using the product. Nemguard has been used across the farm’s 130ha parsnip area for more than five years, and has maintained levels of nematode damage within the expected range.

This season marks the first time the nematicide will be used on its 445ha carrot crop, where about 80% of the area is to be treated, explains vegetable farm manager James Bramley.

If left untreated, the business would be at risk of losing 10-20% of its marketable carrot yield, which annually supplies the UK’s leading supermarkets with 50,000t of carrots and more than 65,000t of total vegetable crops.

“Nematodes really are a major, major pest for us,” he reports. “On a brow of a hill, with extremely sandy soils, we could even see up to a 50% loss in marketable yield,” he says.

As with Vydate, Nemguard is applied as an in-furrow treatment at the time of drilling, with the same rotors and cassettes fitted, with the exception that applicators must be recalibrated to deliver the appropriate 20kg/ha dose rate.

“For us, Nemguard will be the direct replacement for Vydate as it can be applied with the same machinery at the time of planting,” says Mr Bramley.

Costing £9/kg, which equates to £180/ha, only one application is required and growers should aim to apply the product as close to the seed as possible.

However, Nemguard is not for use on silt soils, as silt affects the movement of water and, consequently, uptake of the polysulphides.

Last year, trials carried out by manufacturer Certis at the farm found that applications of Nemguard in parsnips significantly reduced fanging and increased marketable yield by an average of 8t/ha.

About 35% of the crop experienced fanging in the control, while only 20% experienced this when treated, causing a rise in marketable yield from 36t/ha to 44t/ha. 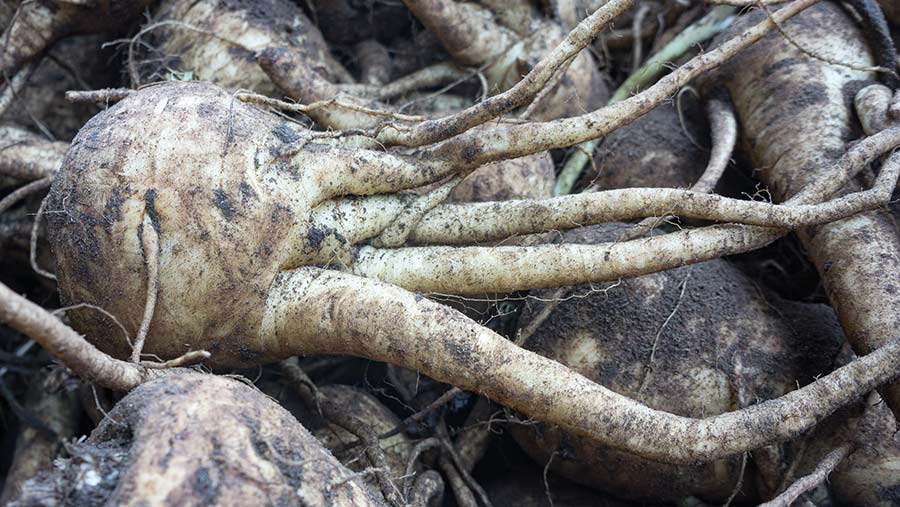 “We find applications in parsnips also bring the added benefit of improved crop germination, as it encourages seedlings to shoot,” adds Mr Bramley.

However, he admits that results can sometimes be a mixed bag, as soil moisture levels are critical for the product’s efficacy.

Feeding by some nematode species can result in suppression of fine root development, leading to stunting of foliage and loss of yield.

“In dry seasons, particularly last year, we see how the efficacy of the granular treatment considerably reduces control of nematode populations.

“A good level of soil moisture is required to optimise application during the early stages of crop growth, especially as soil moisture and temperature affect nematode presence within soils,” says Mr Hinds, who also works as the farm’s root crop agronomist.

Irrigation can, therefore, help improve performance if conditions are dry, although this can be a challenge for farms to achieve during the busy spring period.

Analysing the quantity and type of nematode species present in the soil is of significant importance when reducing nematode numbers.

There are three main types of free-living nematode that impact UK carrot and parsnip crops, each in different ways, with varying treatment thresholds, based on a 2002 Horticultural Development Council report (FV232), says Mr Hinds. These are:

For the past three years, Mr Bramley and Mr Hinds have worked together, annually sampling carrot and parsnip land to identify high-risk areas and threshold levels to develop a precise nematicide application programme.

“Rather than blanket treating, we’re aiming to target crops and cut down on unnecessary input costs, where about 80% of the 445ha carrot crop is expected to be applied with Nemguard this season,” says Mr Bramley.

As nematodes frequently move up and down the soil profile according to soil moisture and temperature, optimising the sampling technique is critical for accurate analysis.

Sampling should take place in the spring and autumn, when the soil is moist. It is important not to sample during a continuous cold spell or when the ground is frozen, or during the heat of summer, where soil temperatures reach around 20C, coupled with low rainfall.

A 1kg total sample taken every 4ha from a field, in a “W” formation from the top 10–15cm of the soil, is recommended, using a tool with at least a 25mm aperture (not an auger), as the screwing action can damage free-living nematodes.

“As the organisms are extremely delicate, particular care should also be taken to not damage the soil sample itself,” points out Mr Hinds.

He also notes that laboratory turn around of soil samples can take several weeks, so sampling needs to be done well ahead of drilling.

Control of the potato cyst nematode

The garlic extract nematicide is also approved for use in potato crops for the control of the potato cyst nematode (PCN).

Applied at a higher rate of 60kg/ha, James Bramley is trialling this on a high-pressure potato field to investigate its effect.

“At the moment, there is limited data on the effects of this in controlling PCN, and with Nemathorin (fosthiazate) –  the current default – up for renewal in a few years’ time, we’re taking this opportunity to trial Nemguard out,” he says.

A range of cultural control methods can also be deployed to help combat nematode populations, since the sole use of nematicides is not a silver bullet for the pest’s control.

Where possible, lengthening the rotation can be beneficial, and avoiding host plants – such as carrots, parsnips, sugar beet, peas, beans and potatoes – can limit the damage of free-living nematodes. Just one additional year can help reduce pest build-up.

Mr Hinds advises growers to drill as late as possible to avoid high soil-moisture levels which nematodes thrive in. However, he admits that with all-year-round carrot supply, this is obviously not possible in some situations.

“Growers have increased interest in using cover crop mixes ahead of the crop for their potential to reduce free-living nematodes. Getting the right mix is important and they can be difficult to plan in, as the majority of fields are on rented land,” he says.

This year, MH Poskitt is trialling two different cover crop species in 4ha plots across Lincolnshire, East Yorkshire and North Yorkshire, to assess the potential of the control method in reducing nematode pressure.

“We’re starting off with a low percentage of the overall total carrot area grown, with the aim to increase this if things go well,” says Mr Bramley.

A green mustard crop will be planted mid-summer, acting as a bio-fumigant crop, which will be cut and ploughed in. On some cereal land, after harvest, an oil radish crop will also be planted to suppress pest build-up.

“Choosing a neutral cover crop species is important, as some species can encourage other soil-borne diseases.”

A novel nematicide, Velum Prime, is now available to carrot and potato growers for the control of nematodes, with an extension of authorisation for minor use (EAMU) also available for parsnips.

Developed by agrochemical giant Bayer, the product contains 400g/litre of fluopyram as its active and is based on a liquid formulation, which may not suit some growers due to the availability of machinery suitable for its application.

For carrots, the product is applied as a broadcast spray up to 72 hours before incorporation in to the soils, at a minimum depth of 10-20cm at a maximum individual dose of 0.625 litres/ha.

Whereas, for potatoes it can be applied either in-furrow at planting or as a broadcast spray.

Independent agronomist Howard Hinds notes that both Nemguard and Velum Prime can be used in conjunction with each other. This may benefit high-risk fields as the two different modes of action work together to offset environmental variation on efficacy to obtain greater control, he concludes.