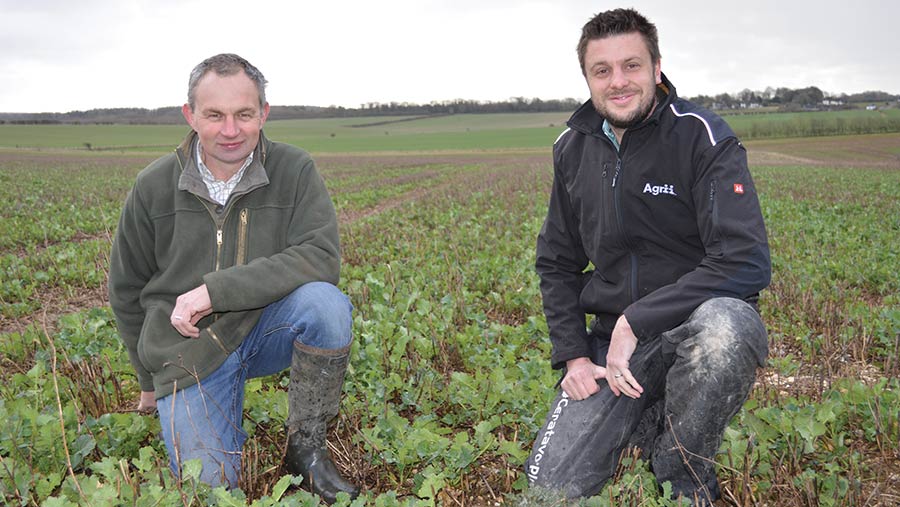 Hampshire farm manager Kevin Smith has kept his oilseed rape free of flea beetle damage through into spring by hiding the crop under a canopy of buckwheat.

He tried out this new establishment technique this season after suffering heavy losses from the crop’s most damaging pest, and the early signs from using buckwheat as a companion crop look encouraging.

The cabbage stem flea beetles arrived in early September, but the young oilseed rape plants were safe under a protective green cover from the clutches of the hungry insects on his free-draining chalky loam soil.

“The crop is looking good at this stage, and the lack of flea beetle damage is amazing,” Mr Smith tells Farmers Weekly. 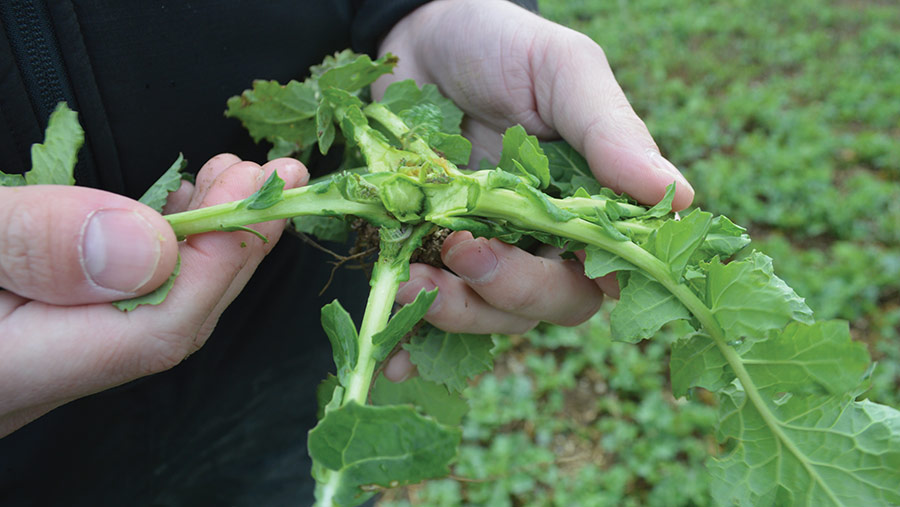 When we visited the crop back in mid-September, small oilseed rape plants with two cotyledon leaves were largely untouched by troublesome flea beetles, and now through into March the buckwheat had been killed off by frosts and herbicides, and the rapeseed was thriving.

Inspection of the crop, close to the Hampshire/Wiltshire border on the edge of Salisbury Plain, shows virtually no flea beetle larvae, and the crop at a population of about 15 plants/sq m was ready to race ahead into stem extension as the spring weather warms up.

“The main goal was to establish the crop without any larval damage and the new system appears to have worked, although we cannot fully judge on just one year,” he says.

Working with his agronomist, Todd Jex from advisory group Agrii, they devised a new establishment system, direct-drilling the oilseed rape into the buckwheat and sprouting volunteer barley to try to keep the valuable break crop on the farm.

“To find an oilseed rape crop at this stage without flea beetle larvae damage is what we are aiming at, as well as creating an even plant population,” says Mr Jex. 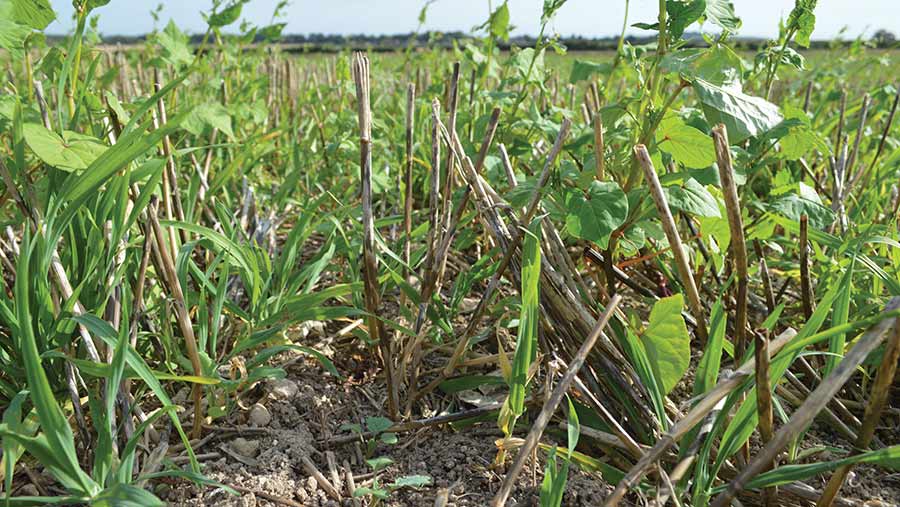 The OSR crop underneath buckwheat in September 2020

When the migrating hordes of flea beetles arrived over the crop, they appeared to find nothing tasty to eat and soon moved on, leaving the young rapeseed protected beneath the unpalatable buckwheat.

No insecticides were used on the crop to try to encourage flea beetle predators such as parasitic wasps, and the only downside of the new system was that the increased vegetation attracted slugs, so pellets had to be used.

The buckwheat was controlled by autumn herbicides, but as it is not cold hardy it did not survive the onset of lower temperatures.

The additional costs of the buckwheat – including seed and drilling costs – is estimated at £20/ha, but this was more than offset by savings from using no insecticides, no cultivations with the move to direct drilling, and no glyphosate and pre-emergence herbicide.

Following our initial visit to the farm in mid-September, the crop was treated with three herbicides and one fungicide in the autumn:

With some growers spending up to £200/ha on oilseed rape crops in terms of variable costs up to Christmas, Mr Jex says it is imperative to have a viable crop in the spring.

A three-spray autumn herbicide programme costing about £70/ha, together with seed, di-ammonium phosphate (DAP) fertiliser, fungicide and slug pellets pushed the Hampshire farm’s variable costs towards £150/ha before the turn of the year.

“For oilseed rape to be viable we need to be yielding 3.5t/ha, and for that we have to make sure we have a good oilseed crop in the spring,” says Mr Jex.

On the farm with 560ha of arable cropping, oilseed rape yields dipped below 3t/ha at 2019, so the area was cut in half to 50ha for this season, putting a question mark over the future of the crop on the farm.

For Mr Smith and the farm’s owner, they have to decide whether to stay with oilseed rape and have the confidence that the crop stacks up financially.

For this season, the farm’s establishment variable costs were only seed, fertiliser and slug pellets up to September, following this sequence:

Mr Smith is hoping they can make oilseed rape work as it helps clean up blackgrass, gives a good entry for winter wheat and there are few alternative break crops on the farm’s chalky stony land.

Winter beans and winter linseed are unlikely to match the profits from a good oilseed rape crop, and spring break crops such as peas and spring beans do not do well on the farm’s thin soils in dry springs.

The farm’s rotation has been widened to grow oilseed rape no closer than one in four years and preferably more, and also block-crop the rapeseed to try to avoid growing OSR next to the previous year’s crop.

One encouraging factor for the crop’s future is price, with rapeseed trading at well over £400/t. This has come after the national 2020 rapeseed harvest fell by just over 40% due to a decline in area and yields – and forecasters believe the crop area is down again this season. 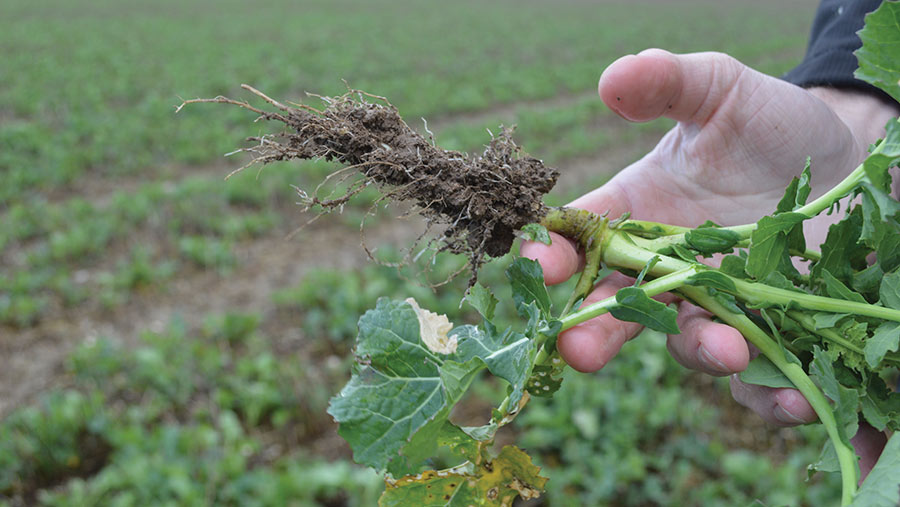 For the spring season, an initial 50kg/ha of nitrogen fertiliser went on at the start of March, and 80kg/ha in mid-month. The potential of the crop will be assessed, but no more than 200kg/ha of total nitrogen along with 50kg/ha of sulphur will be applied.

There will be savings on plant growth regulator use after cold winter weather checked the crop’s growth, although the farm may look at using metconazole at the green/yellow bud stage, largely to help encourage branching.

Would Mr Smith do anything differently? Well, he thinks he missed a trick on early weed control with the winter barley volunteers getting out of hand, especially in the swath lines behind the combine.

In hindsight, he would have used a stubble rake and rolled the ground to get the winter barley to chit, and then control any volunteer barley with glyphosate before drilling the buckwheat. 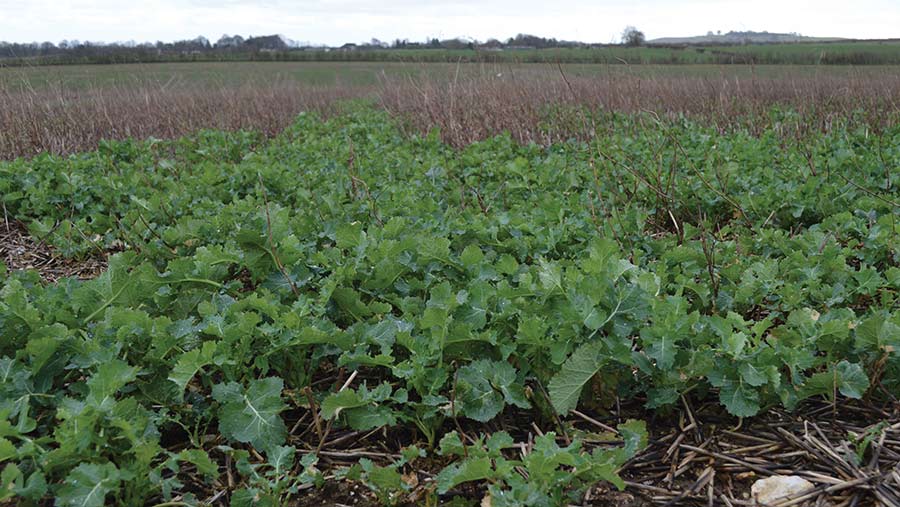