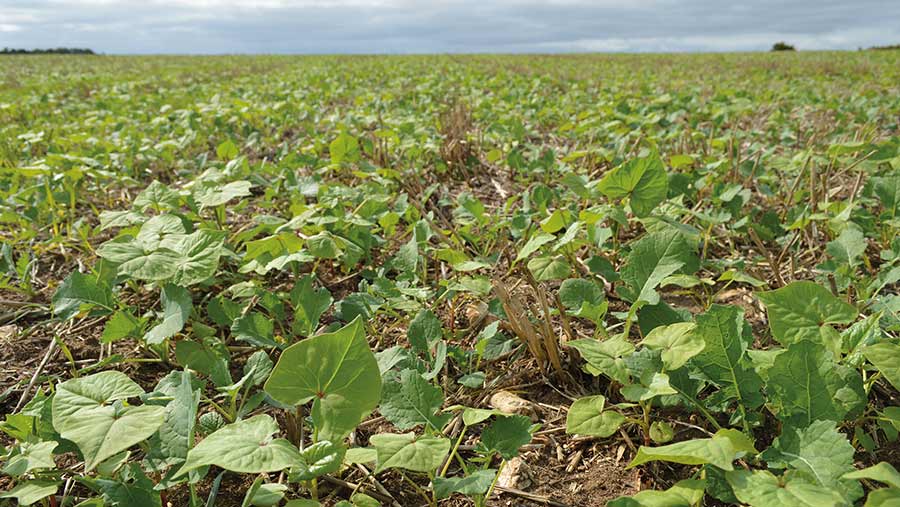 The two growers in Hampshire and Wiltshire are both using a companion crop of buckwheat to protect their oilseed rape from cabbage stem flea beetle damage and are looking to preserve soil moisture to encourage early strong growth.

Both appear to have set their crops up for a successful season with a little help from the fine summer weather and with little flea beetle damage.

Kevin Smith is looking to hide his oilseed rape under a cover of buckwheat and volunteer cereals to protect it from the ubiquitous cabbage stem flea beetle.

The Hampshire farm manager almost gave up on the crop before this year trying a new low-risk low-cost combination of direct drilling and companion cropping to beat oilseed rape’s most damaging pest. 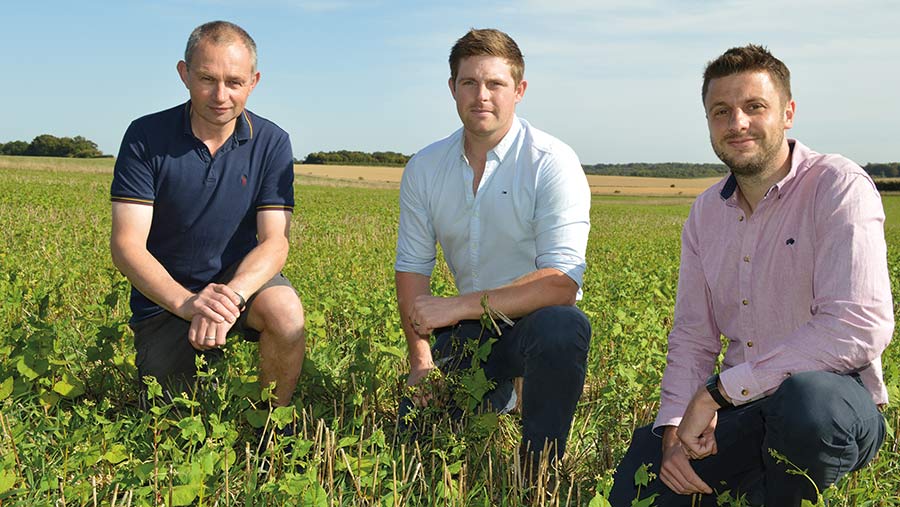 Small oilseed rape plants with two cotyledon leaves and one true leaf were untouched by hungry flea beetles in mid-September underneath the green protective cover.

This layer of just-flowering buckwheat and sprouting cereals from a previous winter barley crop was also keeping the thin chalky loam soil moist in a dry September spell.

“We were looking at giving up on oilseed rape, but decided to have another go and this time looking to do everything right,” he says.

Harvest 2019 saw oilseed rape yields dip below 3t/ha, so the area was cut in half to 50ha for this season and a new establishment approach taken on the farm, close to the Hampshire/Wiltshire border on the edge of Salisbury Plain.

Mr Smith was keen to stop using insecticides, which he found ineffective, and so looked to keep the crop hidden in the key flea beetle migration period of late August to end-September.

Along with his agronomist Todd Jex, from agronomy group Agrii, he adopted an establishment system which is having increasing success in deflecting flea beetle attacks, while only growing oilseed rape in a one-in-four year rotation or wider.

Mr Jex has seen success across his area of Dorset and parts of Hampshire and Wiltshire with the system which protects the rapeseed and encourages flea beetle predators such as parasitic wasps.

“It’s a system of using the minimum of costs until we are confident the crop will not succumb to adult beetles or larvae,” he says.

Mr Smith’s crop was established with the only variable costs being seed, fertiliser and slug pellets, with no glyphosate or pre-emergence herbicide applied, using the following sequence. 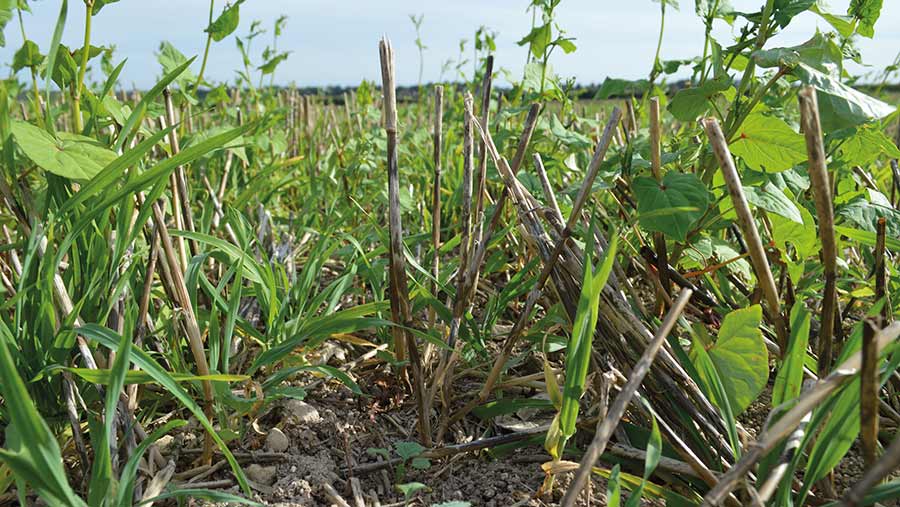 Mr Fraser has drilled 520ha of oilseed rape this season and sees more of his growers moving towards the direct drilling-companion cropping combination.

“A lot of the crops I drilled last season used this system and yielded about 3.5-4.0t/ha,” he says.

Mr Smith is looking to use a graminicide, such as propaquizafop (Shogun), to control volunteer cereals and probably an imazamox-based herbicide for broadleaved weeds, and then propyzamide (Kerb) later if blackgrass is troublesome.

No insecticides are planned to be used which will hopefully encourage flea beetle enemies such as parasitic wasps, while maintaining the wide insect population which was seen when drilling the companion crop.

Mr Jex points out that flea beetles tend to look for bare soil, so young green oilseed plants against a brown background make an ideal target.

Adult flea beetles tend to select oilseed rape plants but their larvae can crawl up to attack buckwheat which dilutes any damage and also kills the larvae as buckwheat dies with the cold.

One downside of the system is that it produces a green cover than can attract slugs, so ferric phosphate pellets were used.

Edward Parsons sees flexibility as the key to establishing oilseed rape on his Wiltshire farm, with two different techniques used depending on the weather and soil conditions.

He can direct drill with his Vaderstad Rapid disc drill, or use a TopDown disc and tine cultivator with a broadcast seeder attached. 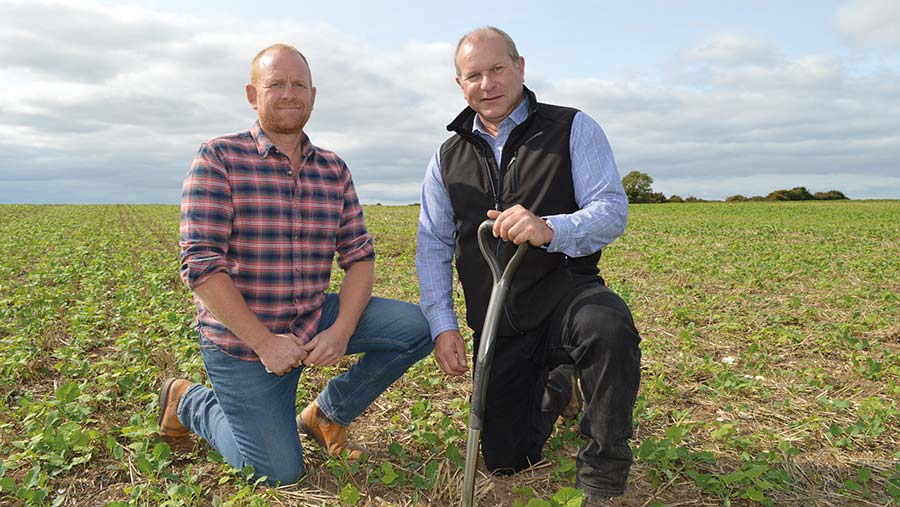 “Direct drilling is perfect if there is a good organic soil and no compaction,” he says on his 355ha Templemans Farms, Redlynch, six miles south east of Salisbury, with its loamy chalk soils and clay caps.

But this summer, conditions were very dry and he was worried the direct approach would not penetrate sun-baked soil and would not create enough tilth in a tightly packed seedbed.

Therefore, he used the TopDown, knowing that rain was forecast, to a depth of 150-200mm and sowed his 37ha of the oilseed rape conventional variety Campus on 10 August, hoping to get it established before flea beetles started to strike.

He drilled the rapeseed at 80 seeds/sq m, or 4.2kg/ha, and then added a companion crop of Lifago buckwheat. The seed of the buckwheat is of a similar size to rapeseed so can be added into the seed hopper with a total seed rate about 8kg/ha.

Using a conventional variety he can keep seed costs down compared with a hybrid variety and keep the seed rate up, and his crops did well last season with an average yield of 3.5t/ha when many other growers suffered badly.

He also applied chicken manure at 5t/ha before drilling to try to get the crop off to the best possible start ahead of any flea beetle pressure. 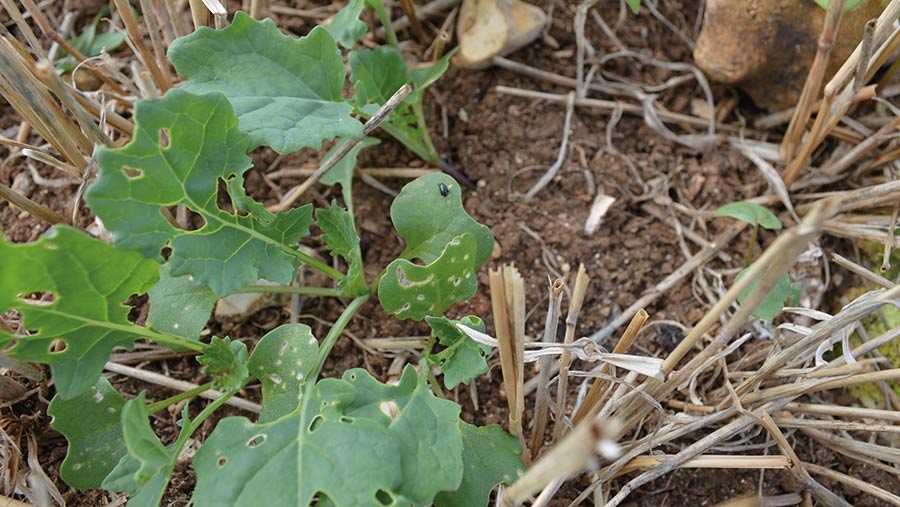 Agronomist Richard Cromie at Crop Management Partners says the peak flea beetle migration has been about 10 September over the past few years, so the plan was to drill early this season.

He adds that crops appear more susceptible at the cotyledon leaf stage, and after a month the crop had four to five leaves showing with roots going down 250mm.

This was illustrated as Mr Parsons had to re-drill about 2ha of his oilseed rape due to bad slug damage, and the subsequent later-drilled crop was more severely hit by flea beetle.

Mr Cromie says direct drilling is a good approach when the soil is friable and there is moisture, and also growers can leave the stubble as high as possible to try to deter flea beetles.

The use of the buckwheat helps disguise the crop from the flea beetle and may help make phosphate more readily available for the generally lazy rooting oilseed rape crop, he adds.

Mr Parsons says a block of his oilseed rape following winter wheat, where the straw was chopped, looked the best-established as the straw helped maintain any moisture in the soil.

“We tend to watch the conditions and this year we were pleased with the TopDown approach as the oilseed rape roots went down 250mm within a month of drilling,” he says.

After rolling, the only treatment was a graminicide propaquizafop (Falcon) plus a pyrethroid insecticide to control any flea beetles.