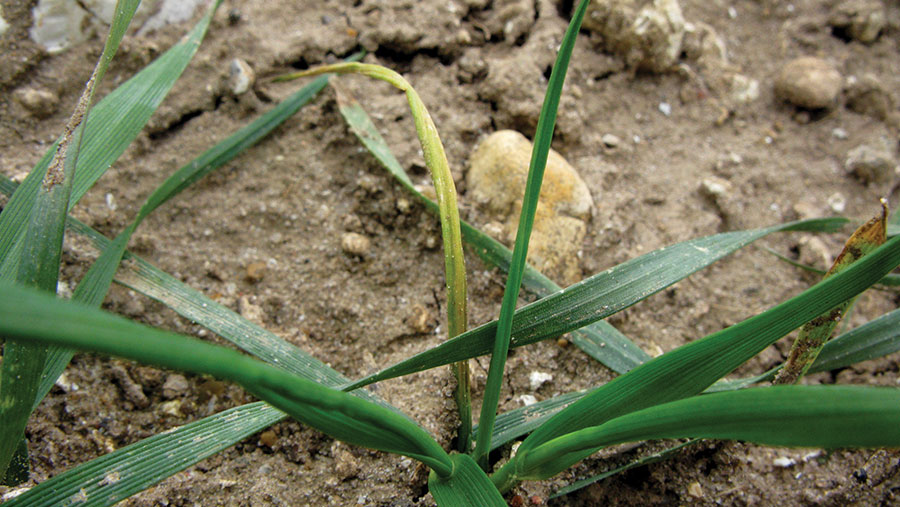 Cereal growers are advised to monitor crops closely for wheat bulb fly damage, after the first signs of plant invasion were seen in eastern England at the beginning of March.

The pest is typically a problem in eastern counties, but can also cause issues in the North, where damage is expected to begin shortly.

Plant tillers are attacked at the base of the stem by larvae, causing tiller death and significant yield losses if crops are not monitored appropriately.

See also: Advice to get thin, struggling wheat going after a wet winter

This season, activity is later than usual, with plant invasion typically occurring between late January and early February.

Neil Watson, technical manager at agronomy firm Hutchinsons, believes the mild, wet winter could have played a part in delaying activity this year.

Despite the later start to activity and an AHDB survey last year suggesting egg laying was low, Mr Watson says there will always be “hotspots” where the pest is seen regularly, and these should be monitored closely from now on for signs of damage.

Later-sown winter crops that were drilled in December rather than October are at greatest risk of attack.

This is because  underdeveloped crops are more susceptible to damage when the larvae bore into the base of stems to feed, before leaving the plant in April or May to pupate in soils.

Thinner crops with fewer than 200 plants/sq m and no more than two tillers per plant are, therefore, more likely to suffer than thicker crops.

Mr Watson notes that spring-sown crops can also be affected, with those sown before March at greatest risk and only April-drilled crops at low risk.

“In these high-risk areas still to be drilled, growers should increase the seed rate for spring crops to compensate for any tiller losses. Rolling can help mitigate pest damage, although this will be difficult in practice due to current ground conditions,” he advises.

“For many growers of winter and spring-sown cereals, crop nutrition and growth regulators are likely to be the only cultural controls available this spring,” he says.

This includes applying early nitrogen to stimulate plant growth and tiller survival, as well as the use of foliar phosphite sprays, such as Advance 66 or Phorce, to boost plant growth.

Applying plant growth regulators based on active ingredients such as chlormequat or trinexapac-ethyl before growth stage 31 can also help tiller retention and boost rooting, he says.

Growers have the benefit of using the Austral seed treatment (fludioxonil + tefluthrin) on spring-sown wheat, barley, oats and triticale.

However, Mr Watson adds that treatments in triticale are on an extension of authorisation for minor use and drilling should be avoided in all cereal crops, otherwise seed treatment efficiency will be compromised.