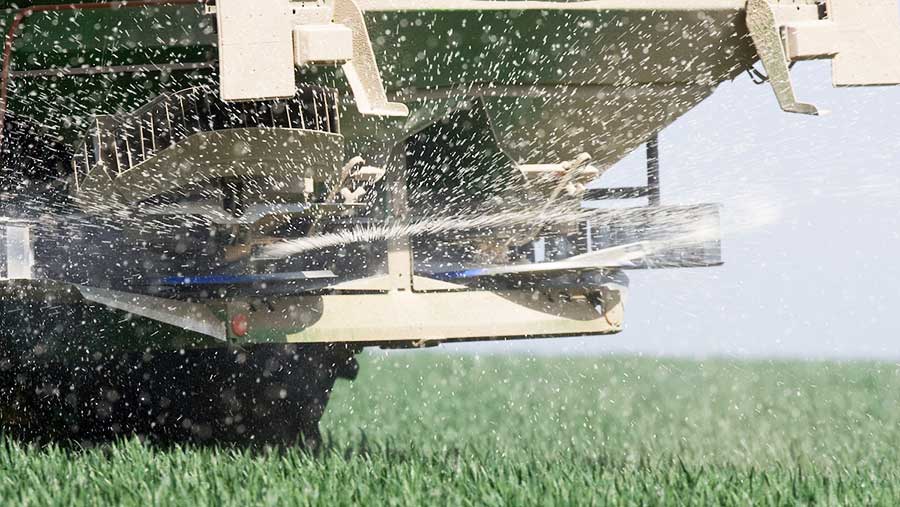 Winter wheat growers are advised to get nitrogen fertiliser on their crops as soon as possible to help tillers survive and encourage rooting after a very wet winter.

Heavy rainfall has limited the root development of wheat plants, and will also have led to vital nutrients needed for early growth being leached away.

Early-drilled wheats established well, but because of waterlogged soils over winter the growth of fine roots has been poor, and these are the ones which seek out moisture and nutrients.

Furthermore, late-drilled wheat crops, as well as having poor rooting systems, have had less time for tillering through the winter.

“This season we don’t have that luxury. So it will be important to build root mass early to prepare crops ready for flowering and grain-filling in case we have a dry summer,” he says. 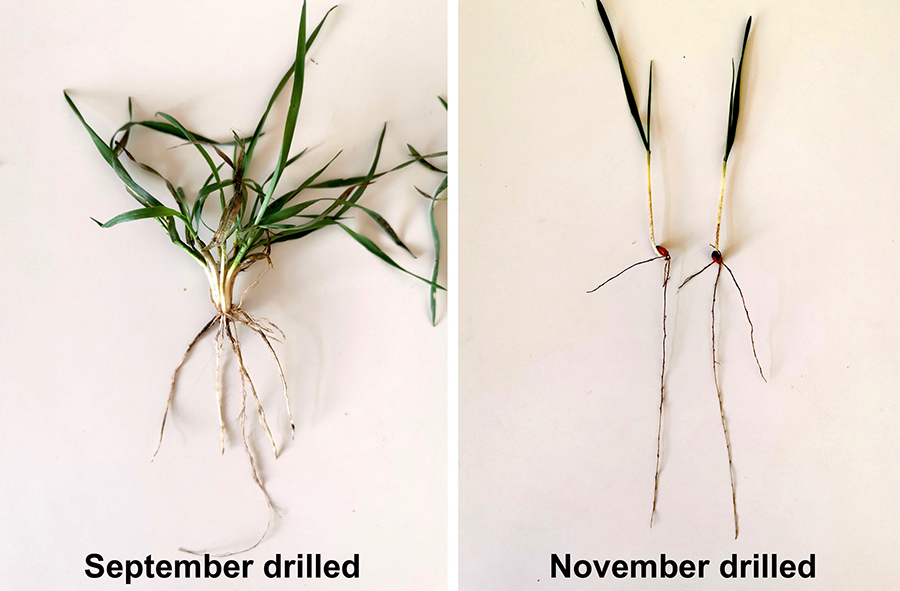 Roger Sylvester-Bradley, head of crop performance at crop consultants Adas says: “Nitrogen would be top of my list to encourage winter wheat crops, but not to apply it on waterlogged soils.”

He suggests applying readily available nitrogen in the form of  ammonium nitrate at some 40kg/ha as soon as fertiliser spreaders are able to travel.

Sean Sparling, independent agronomist, agrees with the small dose of nitrogen strategy with the weather set to be unsettled and a high risk of more rain.

“I would suggest 30-40kg/ha of nitrogen as soon as growers can get on the land rather than 80kg/ha which could easily be washed away,” says Mr Sparling, who is also chairman of the Association of Independent Crop Consultants.

David Ellerton, technical development director at agronomy group Hutchinsons, says he would follow this line with 40kg/ha of nitrogen to maintain tillers and help rooting.

“The key thing is to get the crop growing, and try to make up for the lack of rooting throughout the winter,” he says.

His colleague, Kent-based agronomist David Shepard adds that nitrogen needs to go on soon to help crops root well and maintain tiller numbers during the first couple of weeks of March.

“This early nitrogen will help increase the size of leaves, as well as feed root development and maximise tiller numbers. The aim is to boost the number of ears/sq m,” he says.

Prof Sylvester-Bradley says a target of 400 heads/sq m is a minimum for wheat crops after a difficult winter, compared with top-yielding Lincolnshire grower Tim Lamyman who aims for a minimum of 600 heads/sq m and likes to be towards 750 heads for top crops.

Mr Scott says the use of plant growth regulators (PGRs) can help rooting in backward wheat crops and they can also reduce lodging and improve thousand grain weights of harvested wheat.

“An early application of a plant growth regulator can help in multiple ways. As well as helping to improve root mass, it also stimulates tillering, which helps to offset low plant populations or loss of tillers due to winter kill,” he says.

An application of the PGR chlormequat is a relatively cheap and effective method, and Mr Scott says this transformed crops at the mid-tillering stage after the previous wet winter of 2012-13.

Therefore, he is looking to apply PGRs as soon as possible this spring.

Dr Ellerton also adds that PGR applicatins can help maintain tillers, which could be critical in such a season to try and maximise yields.

Mr Shepard advises applying phosphite along with zinc ammonium acetate with the first PGR to stimulate root growth. He suggests a PGR mix of trinexapac-ethyl and chlormequat which is applied with a T0 fungicide.

Mr Scott says bio-stimulants, like seaweed extract, can help to boost root mass and adds that this is a prime season to consider applying a combined bio-stimulant and micronutrient treatment – beginning while crops are still tillering.

He is looking at a little-and-often approach using a bio-stimulant plus micronutrient programme right through this season.

So if it turns dry, the root mass will have been improved and plants better able to scavenge for soil moisture and nutrients.

“We saw in the dry summer of 2018 that we had excellent yield responses from a bio-stimulant and micronutrient programme on top of fungicides,” he says.

Dr Ellerton says he is beginning to see signs of yellow rust disease and in weak and small wheat crops it is key to control the disease with an azole fungicide, such as tebuconazole, as soon as the disease is seen.

Mr Sparling is planning to use a strobilurin at T0 which will control yellow rust, but also give a physiological boost in terms of improving rooting and scavenging for nutrients while he might add in micronutrients, such as manganese and magnesium, as appropriate.

Coming up in the series

28 February Part 4: Advice on repairing damaged damage soils suffering after one of the wettest autumns in living memory, including fallowing.