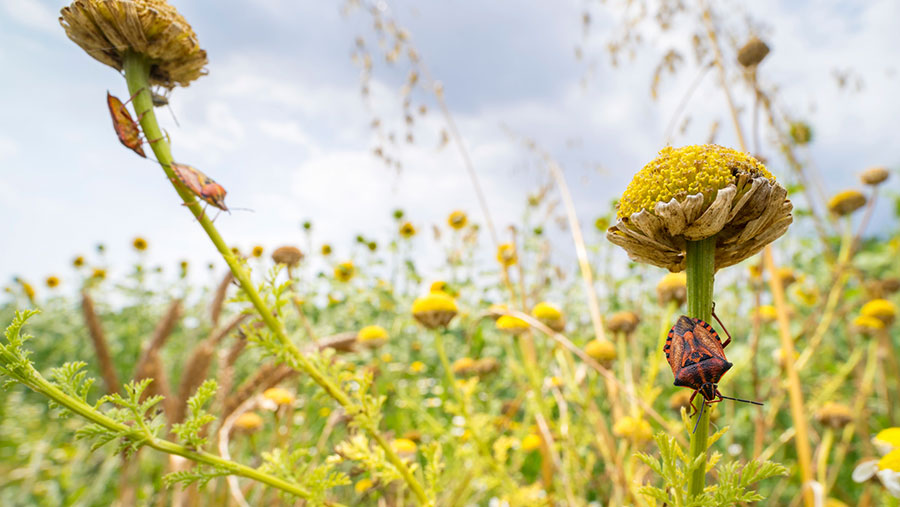 Leaving volunteers and native weeds in crop stubbles over winter will help encourage beneficial insects by providing shelter and forage when there is no standing crop.

Sally-Ann Spence, entomologist and Wiltshire farmer says that although growers have been drawn down the route of using insecticides to control pests, when encouraged in large enough numbers, beneficial insects, or arthropods, can do the job for them.

See also: How a better understanding of oat agronomy will lift yields

Every habitat supports insects, the key is maximising those habitats so that they are capable of supporting a large enough population of insects to have an effect, says Ms Spence.

“It’s important for growers to remember that if pests are present, then so are arthropods, but they are small and difficult to identify,” she says.

Providing year-round shelter such as hedgerows, ditches and cover crops, an alternative source of prey, a flower-rich habitat and a wider environment to live in are all key to supporting a large population of beneficial insects.

Although growers often see insects as either a pest or a beneficial, in reality all are necessary for an ecosystem, and therefore an integrated pest management system, to work.

A “pest” only becomes a problem when it is found in large enough numbers to have an economic impact on a crop, below this it is simply playing its role within a larger ecosystem.

Aphids, for example, are a very important food source for grey partridge chicks, and all British songbird chicks are insectivorous.

Critically, non-targeted insecticides don’t just take out the problem insects, they also remove the beneficial ones, which is why field margins and habitats have to be free of insecticides.

“It’s about breaking cycles and getting systems up and running,” says Ms Spence.

“A healthy ecosystem has to have prey and predators, but it takes a lot longer for the predators to return after insecticides.”

Where there are buffer areas around a field, although the beneficial insects in the crop will have been killed by the spray, there will still be a population in the buffer zone.

“A field must have a population of prey to maintain the predators,” she says.

How to encourage insects

To sustain them throughout the year, growers should follow the principles of SAFE.

These principles focus on providing shelter, an alternative source of prey, a flower-rich habitat and an environment for insects to live in.

While beneficial insects have different needs at different times of year, they will need some form of shelter at all times, such as from a hedgerow or in a ditch.

Insects will migrate from these constant habitats into the crop and back again depending on the time of year.

For the best habitat, hedges should not be cut too drastically, or every year, to allow some second-year growth as this is needed by some insect larvae.

Gaps in hedgerows should be plugged with native British species, ensuring that a hedgerow consists of as diverse a mix of species as possible.

Some species, such as predatory flies and beetles, also need undisturbed areas such as leaf litter, soil and rotting wood to overwinter in, so using minimum tillage can be helpful, as larvae will not be disturbed or exposed to predators.

Insects require alternative foraging areas to a crop where something is flowering at all times of the year.

“Insects only live for part of the year in the crop and need other habitat to forage in.

“Leaves can also be food so if you have a fallow area with nettles and thistles, don’t panic – this is a natural area full of native plants.

“Growers tend to think they need to remove these but they don’t,” she says.

Overwintering stubbles can also be a great source of food if native weeds are present, especially for detritus feeders, which break down organic matter.

While cover crops are often seen as an important way of supporting insect life, using what is already growing in the field can be just as effective, adds Ms Spence.

“If you have weeds growing, what you are offering is shelter.

“There is no need to necessarily put in a cover crop, which has to be sprayed out; what is growing in that area is probably ideally suited as they will be native plants that will suit all the insects.

“Pollen, nectar and wild bird mixes are great, but evaluate first what you are already providing,” she says.

A mixture or perennial, annual and grass margins will provide alternative foraging for predatory insects throughout the year.

The location of these margins is key, close to the field, as many insects can only travel about 50m.

The more diverse the environment around a field is, the larger a population of insects will be able to be supported.

Habitat areas need to join up to enable insects to travel, but allowing the public to walk through margins will be detrimental to insect populations, so consider leaving a drill width between them to discourage walkers.

One management plan will not fit all farms and the level of impact growers will be able to make to the insect populations in their crops will largely depend on the environment around their fields.

What are beneficial insects?

When growers talk about beneficial insects, what they are actually referring to are arthropods, which are insects with more than six legs, such as spiders.

Some will be able to travel quite far, such as bees and other flying arthropods, but spiders will be quite static, which is why smaller field sizes and joined-up margins will help support populations more effectively.

Arthropods perform one of four important functions within the ecosystem: pollination, biological control, food and breaking down organic matter.

Biological control: This group predates on other insects at any stage of their lifecycle and includes beetles and flies.

The other type of biological control is provided by parasitoides.

These kill their host by laying eggs inside it, which then hatch out, and includes parasitic wasps.

Food: All insects are food for each other and for wider biodiversity, such as birds.

Food can be things bigger or smaller than themselves.

Breaking down organic matter: This is done by detritus feeders, who spend the winter in soil or leaf matter.

The cabbage stem flea beetle, of which increasing numbers are becoming resistant to pyrethroids – the last spray in growers’ armoury – has two natural enemies.

One is the carabid beetle Trechus Quadristriatus, which feeds on eggs and young larvae.

The other is the parasitic wasp Tersilochus Microgaster, which lays its eggs in adult flea beetles.

Spraying for flea beetle will also take out both these predators, warns Ms Spence.